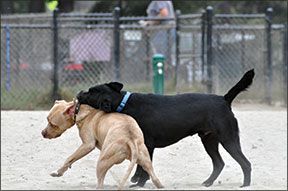 I was pretty traumatized recently by a phenomenon I had heard about many times but had never before seen: the intense, chaotic, life-or-death struggle that ensues when one dog gets his jaw stuck in another dog’s collar.

It happened to some dogs that live a few houses down from my home office. I was working at my computer when I heard a dog screaming. I leaped up from my desk and ran down the sidewalk toward the screaming.

It was two young Lab-mixes in the front yard of a house down the street. One had grabbed his friend’s collar and then mostly likely rolled over, twisting his lower jaw in the collar. His tongue, trapped under the thick nylon, was being lacerated by his own lower teeth; he was the one making all the noise.

His buddy was not screaming; he was fighting for his life, and being choked to death by his own collar. Both dogs were thrashing in pain and fear. The owner of one dog was trying to get close enough to them to free them, and I tried to help.

I grabbed one dog by the scruff; she grabbed the other. I frantically ran my hands through the mass of writhing fur, trying to find a buckle on the collar. I felt a quick-release buckle and released it – but it was the wrong one, not the collar that was threatening their lives.

Then I saw the other buckle; it was in the mouth of the dog whose jaw was trapped. And it was a standard metal buckle – the kind that you have to tighten slightly to free the metal prong from a hole punched in the nylon fabric. It was already so tight, there would be no way to tighten it enough to release it, if I even could get my hand in the dog’s mouth.

Just then, the owner of the other dog ran out of the house with a pair of scissors. I was doubtful that they could cut through the thick nylon, but they did. And in the nick of time! Even as the young woman worked, feverishly, the dog who was choking released his bowels. He was seconds from death.

Imagine what would have happened if that young woman hadn’t had the scissors handy. Or if the same thing happened at a dog park; maybe someone would have had a sharp-enough knife. What if the dog had been wearing a choke chain or pinch collar? I’ve seen dogs wearing these while playing at dog parks – but I’ve never seen a person there with bolt cutters.

These dogs survived the experience. But since I’ve been telling my friends about my experience (with all the fervor of the recently converted), I’ve heard about a number of dogs whose jaws were broken in similar situations – and other dogs who didn’t survive an experience like this. Don’t let it happen to your dog!

Here are five things you can do to keep your dog safe when he’s playing with other dogs.

1. Play Naked! Remove your dog’s collar or harness. A harness may not present the same choking hazard as a collar if another dog got tangled in it, but on the other hand, a harness has many more straps to get caught in.

2. Use a Collar With a Quick-Release Buckle. If you’re nervous about having your dog naked (and without ID), use a collar with a buckle that can be released even under tension. Another option is a safety breakaway collar, such as Premier Pet Product’s KeepSafe Break-Away Collar.

3. Don’t Allow Your Dog to Play With Dogs Who Are Wearing Gear. At times, this may mean your dog won’t be able to play at a dog park, because it’s nearly impossible to get everyone to comply with sensible rules at a dog park. If I had a young dog who really liked wrestling and mouthing other dogs, I just wouldn’t take him to a dog park that was crowded with collar- and harness-wearing dogs. Not after what I saw.

4. Spread The Word. I’m now telling every dog owner I know about the way, the truth, and the light. Many people have never considered this potential hazard and may be open to hearing about how they can prevent a tragedy happening to their dogs.

5. Keep Something Sharp Handy. This is quite a long shot – and yet, I now know a young woman who saved two dogs’ lives with sharp scissors. I now have a box cutter in my car, and another one on a shelf near my office door. I hope to never witness this again, but I feel a little better knowing that there would be more I could do to help.