One dictum for dealing with an ailing dog is to make sure he doesn’t get sick in the first place. And one way to achieve that noble end is to feed him a maintenance dose of garlic, a “wonder herb” that has a long list of beneficial effects for the dog in your life.

Garlic has antiseptic, antibiotic, antifungal, and antimicrobial properties. It can be used as an anthelmintic (deworming agent). It acts as a potent expectorant (helps bring phlegm or mucous up and out of the airway). It can lower blood pressure and prevent blood clots. And it can support the formation of good bacteria in the digestive tract.

For the latter reason, it is “absolutely brilliant” when given to dogs following treatment with conventional antibiotics, according to Hilary Self of Somerset, England, founder of Hilton Herbs, an international supplier of herbal supplements for horses and dogs. Self calls garlic the best-known and most widely used herb in the world. 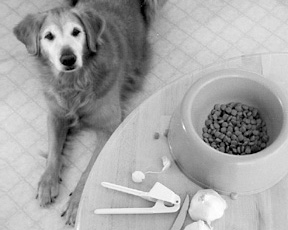 In the U.S., garlic is commonly fed to dogs due to its reputation for repelling fleas and ticks. The sulfur in the garlic is excreted through the dog’s skin, keeping fleas at bay. This is clearly a benefit, according to Self. But it’s not garlic’s most valuable attribute. Given garlic’s many powerful applications, it might be difficult to say which one is.

Garlic, that is, Allium sativum, is a humble little plant and a member of the lily family. It grows all around the world, and it looks unimpressive, at least from on top of the soil. Underneath the ground, it develops a bulbous root, which breaks up into teardrop-shaped sections called cloves. The many benefits inherent in the roots become apparent after the plant is dug up and harvested.

People have eaten garlic to improve their health for centuries. Ancient Egyptians are said to have worshipped garlic (its virtues were described in inscriptions on the Cheops pyramid), and regularly fed it to their slaves to keep them strong and free of illness. Hippocrates (460 B.C.) is believed to have used garlic to treat uterine cancer. There are records of Chinese doctors using garlic as early as the sixth century (500 A.D.) More recently, Native Americans used garlic as a remedy for earaches, flatulence, and scurvy. The forefather of antibiotics, Louis Pasteur, studied garlic extensively and found it highly effective at killing bacteria.

Garlic’s magical properties have not escaped modern researchers. Recent studies have proven that garlic can lower blood cholesterol and blood pressure and raise the levels of anti-clotting factors in the blood. Other studies suggest that garlic can prevent and eliminate heavy-metal poisoning. Scientists have demonstrated that garlic can slow the growth of certain types of tumors. Garlic has even been shown effective in treating opportunistic infections in AIDS patients.

Humans, of course, have shared their good fortune in exploiting this powerful and beneficial herb with their animal companions. Garlic is good for dogs, as well! Dogs seem to be able to benefit from garlic in many ways.

Perhaps garlic’s chief use lies in its ability to promote general wellness. While herbalists discourage feeding daily doses of garlic (or any other herb) year-round, in most applications, experts recommend feeding garlic three to five times a week for a period of a month or two, followed by a reduction or elimination of the dose. Careful observation needs to be maintained. If the sparkle goes out of the dog’s eye, just begin the garlic again.

How to feed garlic to dogs

The most important ingredient in garlic is a substance known as “allicin,” which is formed from a combination of two enzymes found separately inside garlic cloves. The first, “alliin,” is a nonvolatile, odorless sulfur amino acid. When a clove is cut (or chewed), alliin comes into contact with another enzyme called “alliinase.” Combined, the enzymes become allicin, a pungent, volatile sulfur compound that gives garlic its distinctive taste and smell.

Allicin is unstable; it converts into other compounds if it is not stabilized during manufacturing. Heat, in particular, drastically reduces allicin yield. Due to intense competition in the market, most companies that make garlic supplements for the medicinal benefits for humans monitor the amount of allicin in their products. Many state their stabilized and standardized allicin yield on their packaging. If you feed dried garlic, whether in a powdered or granulated form, the important thing is to get garlic that has not been heat-treated.

Fresh garlic is the least expensive option and is the most potent form of the herb. But not everyone is willing to spend time chopping it up for their dogs to eat, and not all dogs will eat it, even if it is mixed into their food. You may have to experiment a little to determine which form is most palatable for your dog. The fussiest eaters may benefit from pure, cold-processed garlic oil, which several manufacturers produce in gelatinous capsules.

Begin with a low dose, introducing garlic in increasing amounts over a week or two until you are feeding the entire dose. According to Self, an average dose of garlic for large dogs should be about one fresh, crushed garlic clove per day. If you feed pure, cold-processed garlic powder or granules, the equivalent is about a half-teaspoon. The suggestion for medium-sized dogs is half a clove (or 1/4 teaspoon of powder); for small dogs, give just a quarter clove (or a pinch or two of the powder).

As with any drug or herb, it’s important to watch for any sensitivities particular in your dog’s body. While garlic is safe for dogs to eat, every dog’s dietary restrictions are different. Some herbalists say that a high daily dose of fresh garlic, given for long periods of time, can deplete the intestinal flora. If the condition you are treating is seasonal, or if the treatment is successful, slowly decrease the dose after the dog improves and maintains the improvement. 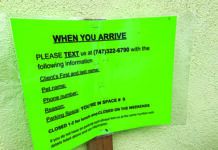 How To Make the Most of COVID-Restricted Vet Visits 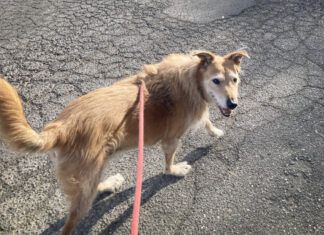 Treasuring The Time I Have With My Older Dog Otto

Nancy Kerns 0
When I take longer or harder hikes now, I have to leave my senior dog, Otto, at home. It’s for his own good; he... 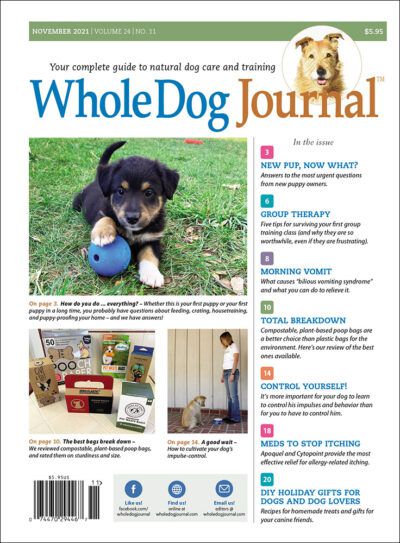