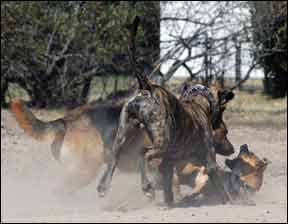 A dog fight that goes beyond a brief scuffle and doesn’t resolve quickly is frightening to behold. In fact, it’s one of the behavior scenarios most likely to result in significant injury to humans, not to mention the dogs. The first, most important thing to remember is keep yourself safe. After that, here are five things to do to try to end the conflict as quickly as possible, with minimal bloodshed.

1. Spray me a river. Blast the dogs with water from a nearby hose – assuming a nearby hose with a powerful enough spray. An easily portable aversive such as lemon juice in a spray bottle can be an effective alternative. In a pinch, even a fire extinguisher makes a handy and effective fight-stopping tool.

2. Sound strategies. Depending on the intensity of the fight, a loud yell might put it to rest. Try dropping one (or several) metal pans on the floor. A lit match held under a smoke detector alarm might also do the trick. Available at boating supply stores, a marine air horn can be effective at breaking up a fight. Warning: they are loud!

3. An object lesson. Keep your hands out of the danger zone by using a physical object to break up a fight. (You have to plan in advance.) Attach two handles to a sheet of plywood. When a fight happens, lower the board between the sparring dogs. The board will push them apart and provide a physical barrier between them to prevent a new grab.

Dogfighters – and some bully breed owners who don’t fight their dogs but know their dogs’ potential – always carry a “parting stick” or “breaking stick” with them. This is often a carved hammer or axe handle, tapered to a rounded point at one end. When dogs are locked in combat, the parting stick is forced between a dog’s teeth and turned sideways to pry open the jaws. Caution: Parting sticks can break teeth, and a dog whose jaws have just been “parted” may turn on the person doing the parting.

Tossed over fighters, one over each, blankets muffle outside stimuli, reducing arousal. This also allows humans to physically separate the combatants by picking up the dogs and pulling them apart with less risk of a serious bite; the blanket will cushion the effect of teeth on skin if the dog does whirl and bite.

4. Air supply. When life and limb are at stake, extreme measures may be called for. Wrap a leash round the aggressor’s neck or twist his collar to cut off his airflow. When he lets go for a breath of air, pull the dogs apart. You can also cover the dog’s nose with a plastic bag to cut off the air supply. These are more challenging than they sound. It’s difficult to get a leash around the neck of a dog who is “attached” by mouth to another dog; grabbing a collar to twist puts you at risk of being bitten and your fingers at risk of getting caught in the collar; and the nose is a moving target.

5. Let’s get physical. I heard about (never tried) a rather drastic technique observed at a dog show decades ago. The elderly judge was a tiny woman. When two dogs got combative in her ring she had the handlers both grab their dogs and hold on tight. Then she took the dog on top by the tail and jammed her thumb up his rectum. He let go in an instant and whirled around to see what was happening. The judge excused the two dogs, calmly washed her hands, and continued her classes. Note: A client of mine tried this recently. It didn’t work for her.

Here’s another approach for smallish dogs in a one-on-one fight; it is not recommended for a multi-dog brawl. Lift the rear of the clearly identified aggressor so he’s suspended with forefeet barely touching the ground. The dog lets go, and the target can scoot free. Supposedly, in this position the dog is not able to turn on the human suspending him, although I’m not giving any guarantees.

There are no guarantees for any of these methods; the best answer is management and modification. If you have dogs who fight, keep them apart, unless and until they learn to get along. The best of management plans can fail, however. If and when that fight happens, take a deep breath, resist your instincts to leap into the fray, quickly review your available options, and choose the one (or ones) that are most likely to work in that place and time. When the fight is over and no one is being rushed to the hospital in an ambulance, remember to take a moment to relax and breathe, and then congratulate yourself for your quick thinking. 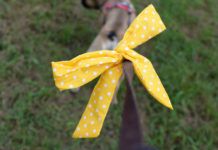 What You Need to Know About Yellow Dogs and DINOS 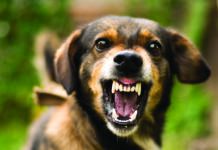 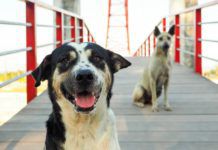