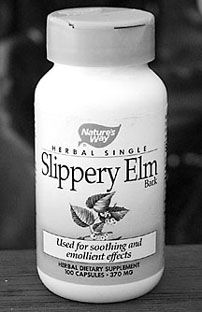 Slippery elm (Ulmus fulva) is one of the safest herbs commonly given to dogs, and one of the most beneficial.

Herbalists attribute many wonderful healing properties to slippery elm: demulcent (soothing, mucilage-forming), emollient (soothing and protective for skin), nutritive (providing specific nutrients), tonic (promoting healthy function of one or more body systems), and astringent (constricting, binding, or drying effect). It can be used both internally and externally. Slippery elm is one of the herbs used in the original formulation of “Essiac,” an herbal brew that has been widely promoted as a cancer-fighter.

The part of the tree used is the inner bark, which is soft and stringy. Simplest to use is the powdered form, which can be purchased loose or pre-packed in capsules at most health food stores. It is also readily available over the Internet from herb suppliers.

In the gastrointestinal tract, slippery elm acts directly. Think of it as a natural Pepto-Bismol (Pepto-Bismol itself should be used with caution because it contains salicylate, a.k.a. aspirin). Slippery elm’s mucilage content coats, soothes, and lubricates the mucus membranes lining the digestive tract. Slippery elm is an excellent treatment for ulcers, gastritis, colitis, and other inflammatory bowel problems. It is high in fiber, and so helps normalize intestinal action; it can be used to relieve both diarrhea and constipation. It may also help alleviate nausea and vomiting in dogs suffering from non-GI illnesses, such as kidney disease. A syrup made from slippery elm bark (see recipe below) can be used to help heal mouth ulcers.

Slippery elm is said to relieve inflammation of virtually any mucus membrane, and has been used in the treatment of inflammatory conditions of the lungs (bronchitis, asthma), kidneys, bladder (cystitis), throat (tonsillitis), and joints (arthritis).

This wonder herb also contains many nutrients (carbohydrates, protein, fat, ascorbic acid, beta-carotene, calcium, and several trace minerals) that can be beneficial for dogs recuperating from any illness, and it may stay down when other foods are not tolerated.

Externally, a soothing paste of slippery elm powder (mix the powder with a little cold water) can be used as a poultice for hot spots, insect burns, rashes, scratches, ulcerated areas, or other shallow wounds. Native Americans used slippery elm bark to stop bleeding. It forms a natural bandage that can be left in place for several hours, if you can convince your dog to leave it alone! Moisten with water to remove it.

Slippery elm is thought to soothe the bladder lining, making it helpful for dogs suffering from cystitis. Slippery elm bark contains natural pentosans, a class of complex sugars that contains the same compound found in the drug Elmiron, the major pain-relieving treatment for interstitial cystitis in women. However, slippery elm is somewhat high in magnesium and ash, so may be contraindicated in dogs who have an active infection with an elevated urinary pH, where struvite crystal formation may be a risk.

To administer internally, mix about a quarter-teaspoon of slippery elm bark powder with cold water for every 10 pounds of the dog’s body weight. (The quarter-teaspoon dose works fine for dogs who are less than 10 pounds, too.) The bulk powder may be very fluffy, so pack it down as much as possible to measure it.

Alternatively, use a half-capsule (per 10 pounds), opened and the contents mixed with water. Slippery elm powder will absorb many times its own weight in water, so be sure to add enough to make a moderately thick gruel. This gruel can be given before meals by syringe or eyedropper, or added to baby food, canned food, or a homemade diet. It has a slightly sweet taste and is usually well-tolerated by dogs when mixed with food. Administer the dose before or with meals for digestive tract problems, such as inflammatory bowel disease, until symptoms resolve.

Because slippery elm may interfere with the absorption of certain minerals and pharmaceuticals, I would recommend that it be given several hours before or after any concurrent drug therapy.

Slippery elm bark is inexpensive and easy to use; it would be a great addition to your holistic medicine chest!

Author Anitra Frazier gives the following recipe for slippery elm bark syrup in her book, The New Natural Cat, which applies equally well to our canine companions when adjusted for weight:

Into a small saucepan, place a half-cup of cold water and one teaspoon powdered slippery elm bark. Whip with a fork. Bring to simmer over low flame, stirring constantly. Simmer one or two minutes or until slightly thickened. Cool, cover, and refrigerate. Keeps seven or eight days. Give a teaspoon of syrup (5 cc) per 10 pounds of body weight five minutes before a meal to minimize diarrhea, or to soothe and heal mouth ulcers.

Jean Hofve, DVM, is a regular contributor to WDJ. Her veterinary practice is in Englewood, Colorado.