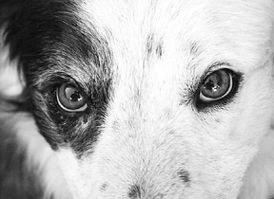 A dog’s eyes, like those of its human companions, change with age. The passage of time and the progression of certain illnesses increase the risk of canine cataracts, glaucoma, and other vision-related problems.

Fortunately, not all age-related vision changes are serious, and some that are serious can be prevented and even reversed. By being aware of the eye conditions that are common in aging dogs, we can do much to help our canine companions see well throughout their lives.

Cataracts make the lens of the eye opaque or cloudy, which gradually reduces vision to the point of blindness. In their early stages, cataracts cause blurring and distortion of vision, but they are invisible to the naked eye. By the time most owners notice them, cataracts involve more than 60 percent of the dog’s eye. Cataracts often accompany other illnesses, such as diabetes and hypothyroidism (low thyroid function).

Surgery performed by a veterinary ophthalmologist is the only treatment considered effective in conventional veterinary medicine – and is indicated only in cases where the cataracts are not a result of a secondary disease such as diabetes.

Here are answers to the most common questions about cataracts in dogs.

Lenticular sclerosis, also called nuclear sclerosis, is very different from cataracts, though the two are often confused. “Lenticular sclerosis is a normal age-related change in the canine eye,” explains Jeff Wayman, DVM, of Belton, Missouri. “As the dog ages, the interior portion of the lens becomes harder and more compact, producing an indistinct greyish-blue haze. Your veterinarian can easily distinguish cataracts from lenticular sclerosis with an ophthalmoscope.”

Some veterinarians believe that lenticular sclerosis does not interfere with vision at all, while others say it causes slight blurring and interferes with depth perception. “This would be more of a problem if dogs had to read or if they were strongly dependent on central vision,” says Mike Richards, DVM, at www.vetinfo.com, “but they don’t read and they don’t lose the ability to see movement, which is more of a peripheral vision ability. Most dogs with lenticular sclerosis will continue to see well enough to get around for the remainder of their lives.”

One of the most common causes of vision loss in dogs, glaucoma is caused by a buildup of fluid in the aqueous humor of the eye, which results in increased pressure. Several factors can interfere with the normal drainage of fluid from the eye, including structural problems with its filtration (known as primary glaucoma) or mechanical problems caused by a displaced lens or the accumulation of blood and other debris in the eye (secondary glaucoma).

Glaucoma can be chronic, in which the illness’s gradual progression may result in tunnel vision, or acute. Acute glaucoma is a medical emergency requiring veterinary attention. A common symptom of acute glaucoma is the sudden development of a red, painful eye. The pain, which may not be obvious at first, can manifest as lethargy, a loss of appetite, or excessive sleeping.

If this condition goes untreated for 48 hours, it may be impossible to save the eye’s sight, and when one eye has succumbed to glaucoma, the other usually follows. While dogs of any breed can develop glaucoma, those most associated with primary glaucoma are Northern breeds such as the Norwegian Elkhound, Siberian Husky, Malamute, and Samoyed, as well as the Bouvier de Flandres, Basset Hound, Chow, Cocker Spaniel, Shar Pei, Poodle, and Shih Tzu.

Elevated intraocular pressure (IOP) damages the retina and optic nerve, resulting in partial to complete vision loss. “Early recognition of glaucoma is vital if vision is to be preserved in the eye,” says Dr. Wayman. “In my opinion, most glaucoma cases should be managed by a board-certified ophthalmologist if possible.” Conventional treatment includes drug therapy and surgery, including the removal of eyes blinded by glaucoma, as this disease can cause severe pain.

Most common in Collies, Irish Setters, Miniature Poodles, Labrador Retrievers, and Cocker Spaniels, inherited retinal degeneration or PRA results in vision loss, usually starting with night blindness or difficulty seeing in low-light situations. Sudden acquired retinal degeneration (SARD) can occur in any breed and is believed to result from metabolic disorders such as Cushing’s disease. There is no conventional veterinary treatment for blindness caused by retinal degeneration.

Although injuries can be a factor, holistic veterinarians believe that the leading cause of cataracts, glaucoma, retinal degeneration, and other vision problems is inadequate nutrition.

In his book, Natural Health for Dogs and Cats, holistic veterinarian Richard Pitcairn notes that cataracts frequently accompany immune disorders and chronic diseases such as diabetes. “Many dogs with chronic skin allergies, hip dysplasia, and ear problems will develop cataracts as they get older,” he says. Removing the lens surgically may help, he explains, but unless underlying conditions such as diet are addressed, the eye will never be healthy.

Research on humans has shown that glutathione may help prevent cataract formation and correct damage from free radicals. Some studies have shown that many lenses affected by cataracts contain only 20 percent of the glutathione found in healthy lenses. Glutathione is composed of three amino acids, cysteine, glycine, and glutamic acid. Natural sources include eggs, broccoli, avocados, and garlic, and glutathione is sold as a nutritional supplement.

In addition, the famous vitamin E researcher Dr. Wilfrid Shute told Dr. Belfield how he treated a champion Doberman Pinscher that stopped siring and went blind with cataracts at age seven. After a few weeks of taking 300 International Units (IUs) of vitamin E daily, the dog sired several litters of puppies and, within three months, his cataracts cleared up.

Another veterinarian mentioned by Dr. Belfield successfully treated canine cataracts with 20,000 IUs of vitamin A daily for 10 weeks. “There are many different types and causes involved with cataracts,” he concluded. “My opinion is that a good diet and supplementation program will contribute to preventing them and may, as the above cases show, eliminate them should they occur.”

It is so difficult to treat glaucoma in dogs that prevention is crucial. Some veterinarians recommend vitamin C and/or the mineral selenium because deficiencies of both have been found in human glaucoma patients. Vitamin C was found to lower intra- ocular pressure in many studies, even in patients who did not respond to prescription drugs.

Cod liver oil has dramatically lowered intraocular pressure in rabbits, humans, and other animals, and oils rich in omega-3 fatty acids, such as flax seed oil, also help lower pressure. Bioflavonoids such as grapeseed extract and the herb bilberry (Vaccinium myrtillus) help prevent glaucoma by maintaining healthy collagen in the eyes. The herbs gotu kola (Centella asiatica) and ginkgo (Ginkgo biloba) may help lower pressure by increasing circulation in and around the eyes, while coleus (Coleus forskohlii) relaxes smooth muscles in the eye and helps lower pressure. For best results, consult an herbalist or holistic veterinarian to determine the best preparations and doses for dogs at serious risk of glaucoma.

The same vitamins, herbs, and supplements that help prevent glaucoma and cataracts can prevent or slow the progression of retinal atrophy. Bilberry, which British World War II pilots used to improve their night vision, is especially appropriate. Because there are strong links between the eyes and the liver, many holistic veterinarians use herbs and supplements to support liver function while treating PRA. The herbs milk thistle seed (Silybum marianum) and dandelion leaf or root (Taraxacum officinale) help tone and repair the liver, as do supplements containing liver.

Acupuncture is an important support therapy for dogs with vision problems. It corrects energy imbalances throughout the body, stimulates self-repair, and strengthens individual organs, including the eyes and liver. Acupressure and massage are also helpful.

With a lifetime of good vision as their reward, any improvements we can make in our dogs’ food, supplements, and support therapies are investments worth making.

CJ Puotinen, a frequent contributor to WDJ, is the author of The Encyclopedia of Natural Pet Care, Natural Remedies for Dogs and Cats, and several books about human health including Natural Relief from Aches and Pains. 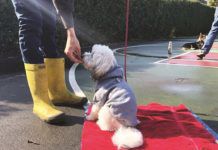 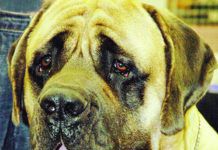 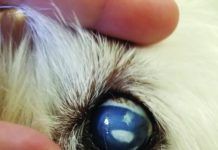