My young Bouvier, Atle, has the triple threat of dog nails: black, stout, and surrounded by lots of hair. Regular nail trimming is not a task I relish, yet the importance of trimming nails can’t be underestimated. Left untended, long nails can splinter or break off, affect your dog’s gait, and cause orthopedic issues and pain. Although ultra-critical for performance dogs, proper foot care is required for the health and well-being of all dogs – couch potato or agility star.

Your dog’s feet are full of nerves that help him with proprioception; that is, an understanding of where his body is in space and relative to the ground (i.e., which end is up). When your dog’s nails are too long, messages to his brain get scrambled, altering his gait and posture. That’s anathema to integrative veterinarian Julie Buzby, DVM, CAVCA, CVA, founder of Dr. Buzby’s ToeGrips, a company that makes a traction aid to help elderly and other mobility-impaired dogs stop slipping on slick floors.

Dr. Buzby is passionate about canine nail care and describes the postural changes caused by long nails: “A dog with long toenails can’t stand with legs perpendicular to the ground. Rather, he compensates by adopting the ‘goat on a rock’ stance, where his forelegs are ‘behind’ perpendicular and his hind legs must come under him to prevent him from tipping forward.”

Dr. Buzby regularly sees dogs for orthopedic issues. Her exams start from the ground and work up; after a nose-to-tail physical exam, typically a nail trim is the first “treatment” on her list – even before chiropractic care or acupuncture. She recently saw a Dachshund who presented for lameness. His nails were long enough to deform the way his toes contacted the ground, altering his posture and gait.

I’m a sports-medicine junkie, so the idea that regular nail trimming benefits a dog’s gait and posture is enough of a “carrot” to get me on board. Those who need a “stick” to motivate them to maintain their dogs’ nails should consider the specter of broken nails (and the veterinary visits to treat them), which are prevalent in dogs with long nails.

“This is a fairly common problem in veterinary medicine and it’s gruesome to treat – painful for the dog and bloody,” says Dr. Buzby. “There is no conservative way to treat this injury.” Typically that means cutting the nail short at the nail bed by transecting the nail to remove the entire thing. She goes on to say, “Sadly, I can’t remember once in 17 years when this happened in a dog with short nails.”

Nails on the Floorboards

It’s not often that we encounter a Dr. Buzby who will tell us, flat out, that our dogs’ nails need trimming; the responsibility to monitor this is ours. There are a few telltale signs to help you know when it’s time to trim:

Your dog’s nails touch the floor when she is standing.

When your dog walks on surfaces such as hardwood or tile flooring, you can hear clicking.

If you hold up a paw and look at it in profile, the nail extends past the pad for that toe.

Front nails seem to wear less quickly than rear, and don’t forget the dewclaws if your dog has them!

Much of the hullabaloo about nail trimming revolves around the dreaded “quick.” This is the center of the nail where nerve and nail blood supply sit. Cutting the quick – as can happen accidently during nail trims – draws blood and can temporarily hurt.

In light-colored nails, the pink quick can often be seen from the top and sides of the nail, whereas in black nails, the quick is not visible from that perspective. To best see the start of the quick, Dr. Buzby recommends looking at the cross section of the nail (front/underneath) that’s visible once the first cut is made. In white nails, the start of the quick is white or pink, while in black nails, it’s grey or black. If you take off very thin slices and examine the nail after each slice, you should be able to avoid cutting into the quick.

Regular nail trimming at tighter intervals is said to help the quick recede, making it possible to trim nails shorter over time. Despite this conventional wisdom, Dr. Buzby, who uses clippers, does not see that happen; an informal poll of a few of her colleagues leads her to believe that most people who are able to get the quicks to recede use a rotary tool, and trim frequently.

The most popular and most recommended tools are scissor-style clippers or a rotary tool/nail grinder (i.e., a Dremel). Dr. Buzby likes the control she gets with her Miller’s Forge nail trimmers, the same argument made by rotary-tool fans. She would “never use a guillotine-style trimmer,” a sentiment echoed by my dog Atle’s groomer, Angela Duckett-Smutney, who says the guillotine trimmers are harder to finesse. If your dog is less than perfectly cooperative and patient, it can be difficult to “thread” each toenail into the hole of the guillotine in order to cut it.

1. Make a coarse cut off the top/front of the nail to remove obvious length. “The angle is very vertical and that is my trade secret!” This is in contrast to a 45-degree angle that is commonly recommended. Since the quick may not be visible on a black nail, the first cut is somewhat blind; err on the conservative side for this coarse cut on dark nails, taking off just the tip to start.

2. When trimming dark nails, many people remove only the tip, but don’t stop there! White or black nail, shave off small slivers until you can see that the quick is close to the cut surface.

3. Round off the sides/corners using smaller cuts. It’s safe to remove the sharp edges on either side of the nail without affecting the quick, since it runs in the center of the nail.

Some individuals prefer to take length off first using clippers, then finish the job with a nail grinder. Whether clipping first or not, Atle’s groomer likes to use a coarse 60 grit wheel and recommends a rotary tool that has significant voltage. She prefers to hold the rotary tool close to the wheel, using short strokes from the bottom of the nail up. She starts with one stroke up the middle, then one on each side at a 45 degree angle, holding each toe individually.

Beware of the hair with long-haired dogs! To keep it from getting wound up by the rotary tool, one recommended technique is to push the dog’s nails through a cheap pair of pantyhose prior to trimming. For these dogs, too, it’s imperative to trim the hair between the pads, as well as any excess hair growing around the edges of the paw.

The following are a few tips that can help with proper nail-trimming:

– In addition to our dread of cutting the quick, many dogs aren’t keen on having their paws handled, and/or aren’t thrilled about the noises associated with nail-trimming tools. See “Positive Pedi-Pedi’s” (WDJ August 2012) for tips on getting your dog desensitized to a nail-trimming routine.

– There doesn’t seem to be one favored position in which to place your dog for nail trimming; experiment and see what works best for both of you.

– Before you start a session, get out your Kwik Stop or other styptic powder – flour, cornstarch, and a bar of soap are all said to work in a pinch – to have by your side should you cut the quick. If you draw blood, don’t overreact! Quietly and quickly apply pressure and a pinch of powder to the nail. Your dog will be okay!

– Be mindful of how much pressure you’re applying to your dog’s toes. Hold her paw only as tightly as you need to – too hard and it hurts!

To keep yourself and others safe, introduce your dog to a muzzle to wear during nail trims if she tends to go on the offensive.

– One other novel approach to consider: train your dog to “do” her own nails by scratching them on a sandpaper-like surface.

If you’re still uncomfortable cutting your dog’s nails, ask your vet or groomer to show you how. Dr. Buzby notes, “It’s critical to keep this a positive experience for the dog. In my first practice, we educated clients on the importance of nail care and the veterinary technicians did a complimentary nail-trimming tutorial as part of every new puppy/kitten office visit. Veterinarians should be tackling both issues [why and how] through client education.” 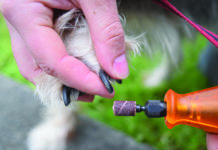