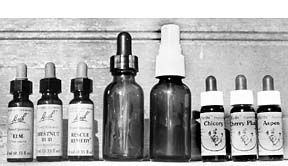 We know from innumerable modern research studies that a person’s immune strength and resistance can be improved through a positive mental outlook, and that people who are happy heal more quickly than emotionally depressed people. Stated simply: emotional states can affect the physical body.

Most veterinary health care professionals would probably agree that the principle is true for animals, too. For example, most healthy dogs are usually happy dogs – or is it the other way around? And have you noticed how, just as with people, very often an anxious or angry dog also tends to be prone to more injuries and illness than a content and cheerful dog?

We have proof of this today, but it was a radical proposition when English physician Dr. Edward Bach (pronounced “Batch”) posed a similar theory in the late 1920s. Bach started his medical career as a bacteriologist, but found fame as the founder of “flower essence therapy,” a healing modality based on the principle that addressing psycho/emotional imbalances can lead to improved health and function. Negative emotions, Bach conjectured, suppress healing, so he looked for elements that could positively affect people’s emotions and moods. His theory was that once a person felt better, he or she would begin to get better. Bach wrote, “. . . our fears, our cares, our anxieties and such . . . open the path to the invasion of illness. Remove the disharmony, the fear, the terror, or the indecision, and we regain harmony between soul and mind, and the body is once more perfect in all its parts.”

Familiar with the use and preparation of herbs through his study of homeopathy, Bach experimented with substances made from flowers, which he regarded as the most vibrationally powerful stage of plant growth, and ultimately developed 38 formulations of “flower essences,” each aimed at a specific emotional condition.

Curing or preventing disease may have been Bach’s ultimate goal, but the flower essences soon came to be valued by Bach’s adherents for their primary ability: positively affecting moods.

Bach’s goal was healing humans, but it didn’t take long for veterinarians who agreed with his theories to try Bach’s formulations on their animal patients. Indeed, for animals, the essences’ ability to improve mental and emotional states has proved to be perhaps even more valuable than for humans. (People, after all, can alternatively be helped by cognitive therapies such as discussion and analyses of thoughts and feelings – not a viable option with animals.)

Animals also provide us with an opportunity to determine whether any benefits experienced from flower essences are due to a placebo effect (where the patient expects the medicine to make him feel better, so he “makes” himself feel better). A dog who begins behaving in a more normal fashion after receiving the flower essences makes an ideal illustration of the flowers’ power!

Without a doubt, the best-known and most widely used flower essence remedy is a combination of flower essences that Dr. Bach named “Rescue Remedy.” The remedy, a mixture of five different flower essences (Cherry Plum, Clematis, Impatiens, Rock Rose, and Star of Bethlehem), is indicated for anxiety, agitation, upset, terror, and shock. Many people give the remedy to their dogs to ease show-ring or field trial jitters, for calming dogs who get anxious in the car, or for trips to the veterinarian’s office.

A growing number of veterinarians also use the five-flower combination on their patients. The blend is not only useful for treating the panic that many animals experience when they visit the veterinarian, but also for treating the conditions that necessitated the animal’s visit!

Maggie Voorhees, DVM, of the Natural Animal Hospital in Sarasota, Florida, makes it a habit to administer Rescue Remedy to her clients before particularly frightening procedures. “I’ve seen amazing results at times,” she says. “Many animals that are pretty wild before being treated with Rescue Remedy calm down nicely afterward.”

Any animal that experiences fear or terror at the veterinarian’s office can benefit from Rescue Remedy, says Voorhees. She administers the remedy to her patients before and/or after surgery, and says it can be counted on to “calm them right down.”

Another veterinarian, Arthur Young, of the Stuart Animal Hospital in Stuart, Florida, says he gives Rescue Remedy to any dog who has been hit by a car or suffered any other kind of traumatic injury. He’ll use traditional emergency veterinary medicine on the dog in addition to a dose of Rescue every 10 minutes until the dog is out of shock.

However, Rescue is not the only flower essence he uses. “I use Bach flower remedies in my practice every day,” he says. “When there is disharmony in the mind, body, or spirit, something will give, and that’s where we get disease. When you’re stressed, you’re sick, and when you’re sick, you’re stressed. Stress creates an obstacle to healing, so I use the Bach flower remedies to fill the emotional need created by stress or illness,” he explains.

Dr. Young can rattle off a number of useful applications for many of Bach’s original formulations. “An animal whose owner has died can benefit from Honeysuckle, which is specifically for ‘grief for the loss of a loved one,’ and Rescue Remedy, to relieve fear, anxiety, and to take away the ‘edge.’ I also prescribe Rescue Remedy for a dog who is going to be traveling, especially for flying. Rather than using a tranquilizer for air travel, I’d treat him with Rescue Remedy for anxiety, add Aspen for fear, and Walnut when the dog gets to where you’re taking him to help him make the adjustment to a new venue.”

Dogs can also be treated for problematic behavior that is caused by negative emotions. For example, a dog “who has a strong personality and feels the need to be in charge can be treated with Chicory to help him quit seeking so much negative attention,” says Dr. Young.

Young also uses flower essence remedies to help him resolve physical problems that are aggravated by negative emotion. “I’ve seen dogs that have developed skin problems from unrelieved scratching, who have been treated allopathically for flea allergies but just keep scratching. Typically, the dog will have been overdosed with pesticides, or cortisone, even antibiotics. I’ll prescribe Agrimony, to help relieve the crawly feeling or sensation of itching, and Crabapple, which can be used as a detoxifier. Within a few days, the dog will feel a lot better – physically and emotionally.”

“In short,” says Young, “I use flower essences extensively in my practice. One of the best aspects of this truly holistic therapy is that it is gentle and non-reactive with other therapies.”

In his house call practice, Russell Swift, DVM, of Tamarac, Florida, uses flower essence therapy alone and in combination with nutritional therapy. But he finds them especially useful for treating behavior problems.

“I have used the flower essences for several years to treat for a variety of pet health problems, and have found them to be very effective,” he says. “But they are great for behavior. I’ve prescribed Chestnut Bud for a dog that ‘failed to learn from experience,’ an animal that kept making repeated mistakes in an obedience training situation – and it makes a huge difference. I’ve found Walnut to be helpful for a dog who had difficulty adjusting to a new dog adopted into a household, and Larch for the new dog who is low in confidence, as he was low in the pecking order in the household.”

Dr. Swift says the availability of the essences, as well as information about them, makes them especially useful to dog owners. “In the past decade, there has been a significant increase in the number of essences available from around the world, and many books and courses available on the subject for anyone who would like to learn how to use these healing substances,” he says. The biggest challenge for most pet owners, he warns, is in selecting the appropriate essences. “Since we have to interpret our pet’s behavior patterns through our own eyes, it is difficult not to superimpose our own emotions and feelings on them.”

How to Use Flower Essence on Your Dog

Flower essences generally come in tiny bottles of less than one ounce. The already diluted contents is referred to as a “mother tincture,” which is usually (but not necessarily) diluted further before administration. The undiluted mother tincture can be administered directly to a dog (two drops at a time), but due to the high alcohol content, many animals object to its taste and smell.

Further dilution does not affect the action of the essence, and it saves money!

Most health food stores that carry flower essences will also sell small (about 30 ml.) dropper bottles and/or mister bottles to use for mixing and administering a “working stock.” Pour three parts water (well, filtered, or bottled water if possible; neither chemically treated tap water nor distilled water are recommended) to one part alcohol (vodka, brandy, or Purol) into the bottle. Most experts suggest adding two drops of each mother tincture to be used (up to a maximum of seven essences, with Rescue Remedy counting as one essence) to the water/alcohol mixture. Then, put the top on and shake the bottle vigorously. Administer four drops of this working stock to the dog four times a day for chronic symptoms, or every 10 minutes or so in emergency or critical situations. (The potency of the essences is best increased by more frequent dosing from the working solution bottle, rather than giving a mixture with a higher percentage of mother tincture.)

Commonly, the working stock is administered with an eyedropper and squirted into the dog’s mouth. Some people prefer to drop the mixture onto a treat and feed it to the dog. The mixture can also be sponged onto the dog’s face, softly massaged into his skin, and rubbed behind his ears. Sometimes a dog who is panicked or aggressive will calm down after being gently misted (through a cage door, for instance) with a mixture formulated for his condition.

None of the essences’ manufacturers claim that the products will heal specific conditions on a physical level. The essences should not replace medical treatment, and should your dog manifest any symptoms of illness before, during, or after treatment, consult your veterinarian as usual. All of the makers say that the essences may be administered by themselves or in conjunction with medical or other treatment; they won’t conflict with medication, including any homeopathic remedies.

That fact that you don’t have to (and shouldn’t) change anything about a dog’s other treatments when you administer the remedies makes it easier for many skeptical dog owners to give the remedies a try; since they cannot hurt a dog in any way, an owner has “nothing to lose” by giving them a try. And that’s often precisely when the flowers seem to work their subtle, wonderful miracles.