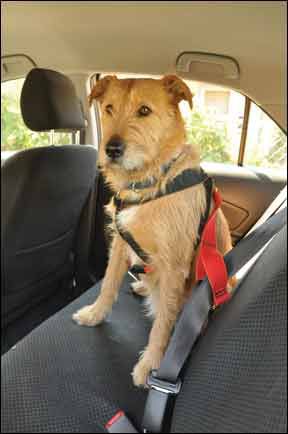 An after-dinner family ritual, when I was a kid, was for each person seated at the table to share what they were most grateful for since last Thanksgiving. Those dinners don’t happen any more, but each year I ask myself that old question. Sometimes the answer is cause for mental debate, but this year, there was no doubt at all. One thing leaps instantly to mind: the fact that my dogs are both safe, that neither was injured when a speeding bicyclist T-boned my new Subaru in September.

Although there was $5,000 worth of body damage, and the driver’s side passenger seat window shattered, there were no injuries other than my minor glass cuts. Our guardian angels were riding shotgun that sunny Sunday in the park. While there was shattered glass in one crate, neither Meg, our 10-year-old Cardigan Welsh Corgi, nor Zebra, our 5-year-old Bull Terrier, was injured, or traumatized – and neither dog had an opportunity to either escape or bite somebody in a panic.

DECISIONS, DECISIONS
The route to car-crating was not easy for me. Along the way there were signs it was the right thing to do, but it took me longer than it should have to heed them.

– There was the time in the 1980s when 4-month old Bram, learning to stay quietly in the backseat, leaped out of the drivers’ side window before the car had come to a complete stop, so excited was she to be at the dog park. I drove with the window all the way up for a long time thereafter. But it couldn’t have happened, had she been properly crated.

– Next I was rear-ended by a young man who had lost his license and had “borrowed” his mother’s car. He never noticed that red light I was stopped at. BLAM! Amy, Bram’s daughter, sleeping on the back seat, hit the back of my seat so hard it broke loose, shoving me forward into the dashboard. That wouldn’t have happened had she been properly crated.

– Once at a dog show on a cool day, I left my two un-entered Bull Terriers sleeping on the back seat of my locked car while I went to meet someone. The girls barked and security guards showed up, scaring off three young men in a pickup truck, who by all appearances intended to steal my girls through the open sunroof. That wouldn’t have happened had they been properly crated.

– In 1993 I traded my mini-car for a maxi-car, one I could get crates into. It was a less-than-perfect solution, as there were no “tie-down” points to secure crates, and the two would not fit side by side in the back. But now that a 2011 Subaru has come to live in our garage, there are tie-downs to secure the crates, and both fit side-by-side. I’d prefer that Zee be in a VariKennel, rather than a wire crate, but better visibility trumps here. I can’t see to the rear with a large VariKennel in the back.

– Had my girls been loose in the passenger area of the car when that bike hit, they would have been injured. I’m sorry beyond measure that the demonstration proving crates essential happened, but I’m beyond glad that they were crated. Can you imagine how you’d feel if your dogs were injured or worse and you could have prevented it? I can.

Reasons To Crate
Properly secured crates provide the greatest safety for dogs, as well as for their people. Why secured? So the crate containing the dog does not itself become a projectile if there’s a crash.

-A properly sized crate allows dogs to stand, to turn, to lie down, providing some freedom, but not so much as to permit them to rattle around like teacups in an oak barrel.
-A dog crate contains . . . well, everything you don’t want all over your car. Ordinary dog hair, dirt, and mud for sure, but also any unexpected vomitus, diarrhea, slime, or slobber.
-A crated dog cannot leave the car without permission. Even the best-trained canine can sometimes forget to “Wait!”
-Crated dogs in a multi-dog household cannot get into fights. Ever try to drive with two dogs fighting in back? Don’t.
-Crated dogs can’t breathe heavily in the driver’s ear or stomp on or get under the gas pedal. They can’t knock a gear shift from Drive to Neutral. Crated, they must be little ladies and gentlemen; this is management at its finest.
-If there is an accident and dogs are injured and / or terrified, total strangers will feel safer helping than if they were loose and potentially threatening. Confined to their car, they will not be loose on the freeway. There is no chance that they’ll be lost, strayed, or stolen.

Alternatives
There are other ways to address dog safety in cars, and there are also pros and cons for each.

– Seat belts follow crates in effectiveness. However, the part that the dog wears needs to fit properly, and should be easy to put on. Metal hardware, less likely to break, is preferable to plastic. No restraining system should ever attach to a dog’s collar; the risk of tracheal injury or a broken neck looms large. More and more canine seat belts are being crash-tested; this should be a requirement for any product you buy for your dog.

– Dog car seats abound. There are many models to choose from. Consensus is that they are best for smaller dogs, and that they are not as safe as crates or seat belts.

– Barriers, usually made of metal, though mesh or plastic can be used, are more about safety for humans, rather than safety for dogs. While barriers can effectively prevent canine passengers from distracting the driver, or from becoming projectiles in the event of an accident, they don’t do much for the safety of the dog.

Since “There’s no place like home for the holidays”, please crate your dogs while you travel there. You might be very thankful, and so might they.

Shari A. Mann lives in San Francisco. She mans the “help desk” at bullterrierrescue.org, and enthusiastically supports dog rescue.