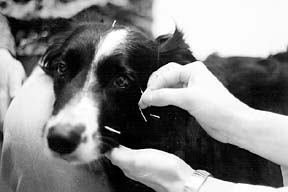 A woman wakes up one morning and goes into the kitchen to make some coffee and let out her dog. When he sees her, he rises from his bed and begins to yawn and stretch. He interrupts himself, though, with a yelp of alarm and a fit of head shaking. When the woman calls his name, he stops, and walks to her holding his head at an angle. “Oh, honey, is it your ears again?” the woman asks. She gently lifts one of the dog’s ear flaps, and confirms her suspicion. The interior of the dog’s ears are red, inflamed, and sour-smelling.

For many people, this episode would be followed with a trip to the veterinarian and a treatment of an antibiotic, to kill the bacteria that has infected the dog’s ears. Some people become accustomed to taking the trip to the veterinary clinic several times a year, because their dog’s condition is something that spontaneously recurs again and again.

In this case, however, the woman takes a couple of deep breaths and begins to touch the dog’s head and ears. She applies pressure to specific areas on the back of the dog’s neck, the top of his front leg, and a spot on the outside of his ear. Within several minutes, the dog takes several deep breaths and lowers his head. When the woman rises, and opens the door to let her dog outside, he trots outdoors with his head held normally, temporarily relieved of the pain of his inflamed ear.

Helping The Body Heal Itself
The dog hasn’t been cured by this application of acupressure, the use of pressure on specific locations on a human’s or animal’s body. But the touch has prompted the dog’s body to release its own store of pain-killing chemicals into the bloodstream, giving him temporary relief from the ear infection. Additional help from an experienced acupuncturist can affect the workings of the dog’s entire body, including its metabolism, circulatory system, internal organs, and the very life force of the dog. Bringing his body into a balanced state, say practitioners of this ancient medicine, will enable him to fight the infection on his own.

More and more people, veterinarians included, are beginning to discover the benefits of these healing practices which have been used and trusted for over 4000 years. Acupressure, probably the oldest form of Chinese medicine, is the application of pressure, usually by the fingers, thumbs, and hands, to specific points on the body to stimulate the body’s own healing ability. Acupuncture, fully developed by 400 BC, uses needles that penetrate the skin to prompt the same acupoints on a deeper level. Even though the explanations of how they work may require the mind to stretch, the truth is, these methods work well, work consistently, and many times, even work when conventional treatments have failed to cure.

One of the best things about acupressure is that all dog owners can use it to increase their dogs’ health and well-being. It is also invaluable in times of crisis, and can increase your awareness of your dog’s body.

According to historical accounts, acupressure and acupuncture was first used on horses and other livestock, probably because of the indispensable nature of animals at that time. The healing methods that evolved in China are based on an entirely different view of the body and its workings than those we are familiar with in the western world. Contemporary Western medicine sees the body as an amalgamation of individual parts that can be looked at and also healed as separate and distinct pieces. We have specialists for every part of the body who have amassed enormous knowledge about how each part works both in health and disease, and how each responds to treatment.

This medical model has brought about spectacular advances – such as antibiotics, vaccines, and laser surgery. But because modern medicine sees the body much like a machine made up of specialized parts, doctors usually go to the site of the symptom and either “fix” it with drugs (like antibiotics), replace the damaged part (as with a hip replacement), or just cut it out (like an appendix or tonsils).

Although many of these procedures produce amazing results, cures for conditions that affect the body in less specific ways (like Pre-Menstrual Syndrome and migraines, for instance) remain elusive. Many times, if thae cause of dysfunction doesn’t originate from a specific place in the body, doctors are unable to cure the symptoms. The same often holds true for modern veterinary medicine. Think of the mild but persistent lamenesses that have plagued dogs you have known. Their problems often go undiagnosed regardless of how many tests the veterinarian runs. If a defective or diseased body part cannot be pinpointed, modern veterinary science is unable to recommend any “cures” except rest and painkilling or anti-inflammatory medications.

The Chinese view of the body is more holistic. It sees the body – canine or human – as an intricate system where all the elements are intimately intertwined. Chinese medical practitioners address symptoms as signposts leading the healer to an imbalance of the system at large. They seek to find and heal the root cause of the symptom, not the symptom itself.

Instead of seeing the body like a machine, practitioners of Traditional Chinese Medicine (TCM) view the body more like a lush garden where the whole is seen as a complex and interdependent ecosystem. If you douse aphid-infested plants in the garden with poisonous chemical insecticides, the whole garden will need to heal from the effects to the soil. Similarly, if you address an allergy problem with steroids as a long-term solution, you may cause a loss of bone calcium in your dog, resulting in bone weakness and even fracture, causing a whole new problem for the body to deal with.

Chi is the Key
TCM looks at the body as a whole and uses methods that treat the system as an entire network of linked components, not individual parts. Central to this view of health and healing is the concept of energy, called “chi” (chee). By energy, we mean the life force that flows through all of us, glowing bright when we are healthiest and happiest and dimming when we are sick. Look in the sparkling eye of a fit, healthy dog and compare it to the eye of a dog in pain. Chi twinkles in the first and fades in the second.

Practitioners of TCM hold that the entire universe is suffused with chi, and that it is chi that animates the dense physical matter of all living things. Although chi infuses every cell of our bodies, it is concentrated in set pathways, called “meridians,” which pass like rivers throughout our bodies. Each meridian has a route through the body. It also has a certain quality, purpose, and energetic task to perform in the body. The tasks relate to functions in the physical, emotional, and spiritual body. For instance, the heart meridian governs the workings of not only the physical heart, but also the emotions of love and joy and the quality of spirit.

Energetic Irrigation
In the perfectly balanced body, all of the energy pathways (meridians) conduct the flow of energy in an unimpeded manner, like a newly built and spotlessly clean irrigation system feeding water and nutrients to the garden. However, most of us have parts of our energy system that have become blocked or congested from emotional (internal) or environmental (external) stresses. When a dog loses a close buddy, or begins a new and challenging training schedule, for instance, he needs special care like rest, proper nutrition, and gentle attention, to allow his body, mind, and soul to adjust. Without this care, the body’s energy can stagnate, clog, or diminish.

Acupuncture and acupressure seeks to rebalance the body by realigning the energetic “irrigation system” so that the chi may flow smoothly. In a sick dog, like the one described at the beginning of this article, the energy flow is definitely not moving in a normal, health-producing manner. Touching specific acupressure points stimulates the release of the dog’s own internal chemicals which naturally rebalances the body and helps it return to proper function.

Traditional Chinese doctors were once paid only for maintenance visits because their primary role was to help the client remain healthy. Should the patient become sick, the doctor was obligated to provide free care. TCM was best utilized in a preventative manner, instead of a curative one, and can be used in a similar manner to keep your dog well.

I suggest using both the Eastern and Western systems for what they each do best. Western medicine is remarkable for severe problems like life-threatening accidents and disease. Regular acupressure and other tools of TCM can build health, improve performance, and prevent illness.

Author Susan Tenney, CMT, lives in Sonoma County, CA. She is a regular contributor to The Whole Horse Journal.