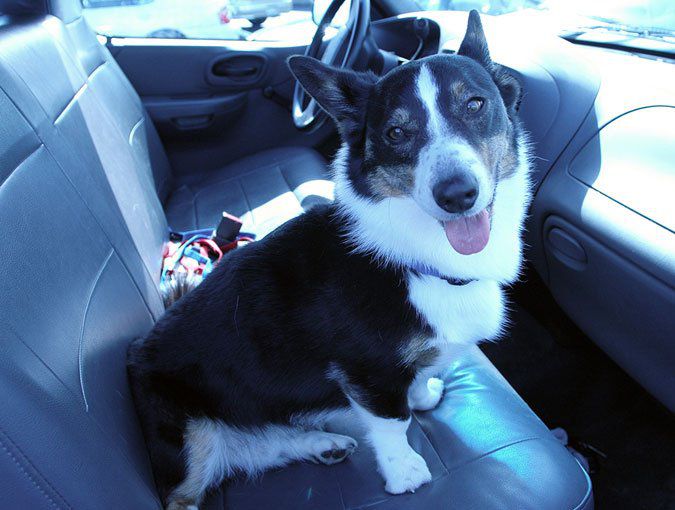 Yesterday, I met a friend in a town about halfway between her house and my house, which are about three hours apart. We both had things to do/people to visit in that midway city, and then she – and her darling, 30-pound moppish-mixed breed dog – were going to follow me home and spend a few days visiting. We met outside a Whole Foods store/restaurant, and I proposed we go in and eat lunch before driving the rest of the way to my house. My friend said, “Can we take turns going in and selecting our food? I don’t leave my dog in the car.”

My mind boggled. If it was hot (or even warm) or freezing out, I would immediately understand, but it was about 50 degrees – a pretty much perfect dog-in-the-car temperature, in my view. So I had to ask, what’s up with that? I had a foster dog chew through the front seatbelts in my car once; was it about separation anxiety, or something?

My friend’s answer had more to do with concerns about the behavior of others in the San Francisco Bay area. People have become so incredibly sensitized about seeing a dog in a car, she said, that even if the temperature is no threat whatsoever (like right now in northern California), you just can’t predict the behavior of people who might be concerned about your dog! And, actually, once she mentioned this, I remembered hearing a horror story from another trainer friend about a dog being stolen out of a car, with a note left behind indicating that the person didn’t deserve to have a dog if they were going to leave it in the car!

My friend also said, “People are just so bizarre. You also hear about dogs being teased and worked up into a frenzy. I just don’t want to leave my dog in such a vulnerable place, even just for a few minutes.”

So, I get it – even if I can’t imagine being unable to run into a place to pick up take-out food, or some other quick errand. When the weather does not permit, the dogs stay home ­- that’s all there is to that.  But at this time of year, if I’m running errands, I often take my adolescent dog, Woody, into the types of places where dogs are welcome: Home Depot, Tractor Supply, and so on. It’s a great opportunity to continue his good manners training. If I have to run into Staples, or want to join someone for lunch, he stays in the car, no problem. But in my small, rural town, neither the issue of self-appointed dog police or people who tease dogs in a car have appeared to be a problem.

As it was, my friend and I were together, so we took turns going in and ordering our burritos, and then we ate outdoors, with the little mop-dog cleaning up our last bites.

How do you feel about leaving your dog in the car, weather permitting, of course? Do you actively avoid it? If so, what are your reasons?