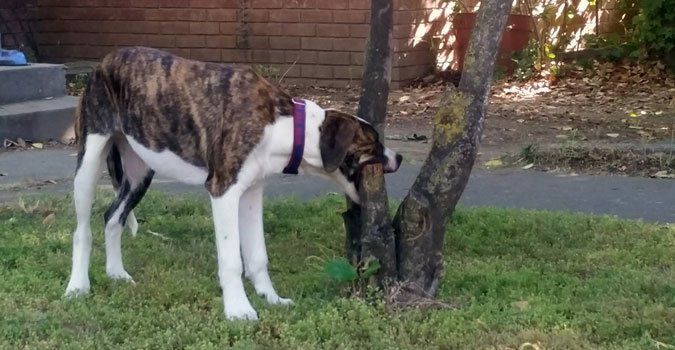 The breed rescue I’m fostering for has a policy that they use for naming the dogs in their care: All the dogs rescued in a given year are assigned a name that starts with a certain letter (or, in the case of the letters with few names, a few letters, like X, Y, or Z). In contrast, puppies in a litter (like the ones I have) are assigned names taken from songs from a favorite album. One of the rescue coordinators is a big Jimmy Buffett fan, so all the pups I’m fostering have been given names from a certain Jimmy Buffett record. These are generally temporary names, used just to market the dogs and pups on the rescue website and Facebook page. Most people end up re-naming the dogs once they are adopted.

Re-naming is in order, though, when someone brings home a newly adopted dog who has been assigned a name at random. The families who have adopted the first two of my foster puppies both asked: Is it okay if we change her name? Of course, please do! It’s not like I have spent enough time calling them by their individual Jimmy Buffett-themed names for them to recognize the sound. But it’s not just these families; when dogs in my local shelter have names, people always want to know if they can rename them. Unless it’s an older dog who super obviously recognizes his or her name and responds to it well, I think giving an animal a new name with his or her new home is appropriate – a clean slate!

I was glad to be given a list of temporary names to assign to the puppies, though, because I’m the most unoriginal namer in the world. I usually leave naming to my husband, who can be counted on for good names. When I asked him for a super friendly, happy name for our youngest dog, his first choice was perfect: Woody, after the cowboy in the Toy Story movies. Woody has just the right tone for our goofy, enthusiastic young dog. It would have been nice if it didn’t develop that Woody had a thing for chewing up anything and everything made of wood (an apple tree, a dog house, our deck, wooden picnic benches, our bamboo, etc., etc.) but that was surely a coincidence. It’s been suggested that perhaps a re-naming is in order – but I don’t truly think that will stop Woody’s fondness for chewing wood. That’s fading now, anyway, as he grows comfortable with his adult molars. He hardly ever chews up anything we really care about any more.