When I brought my dog Otto home from the shelter, I knew he was a killer. He had at least one murder on his rap sheet. His cage card said, “Kills chicken.” (It was a typo…I assume he either killed one chicken, or will kill chickens.)

I do know he’s very “birdy.” Though he looks at feral cats with some interest and squirrels with a little more, his eyes light up the brightest when he sees birds on the ground. If you could ask him, he’d probably admit that the highlight of his life with me so far was the day I took him for an off-leash walk in the woods, and he startled a flock of wild turkeys. He chased that flock well out of my sight, with the birds flying above the dirt road that Otto was flying along. He came galloping back to me about three minutes later, looking a little alarmed, with that lost-dog expression, until he saw me. Then he looked as happy as a dog can look, grinning like a kid getting off the wildest, most exciting roller coaster ever. “You wouldn’t believe how much fun I just had!”

So what the heck am I doing getting chickens?

Well, we’ve built a very solid house that they will be locked in at night, with a nice little fenced-in run that they can use during the day. And for the first few months, we’ll be watching our dog closely. My stepson commented, “Well, this will be a test of your training, right?” I responded, “AND a test of our management.” The rules for now are, at night and when no one is home, the chickens have to be locked in their “safe house.” When we are outside and paying attention, they can be in their yard and he can be in his yard. When we go in the house, so does he. I’m more afraid of how well trained my kids and husband are than the dog, really.

We brought the first three hens home today. It’s pouring rain right now, so we’ll put off all the introductions until later, when we can let them in the yard and watch Otto’s response.

I feel pretty confident. Otto has learned a really reliable “off” cue and response, and as long as I have plenty of opportunities to reinforce him for looking away from the chickens on cue, I think he’ll get the idea.

Anyone else with reformed killers in their midst? Any words of advice? 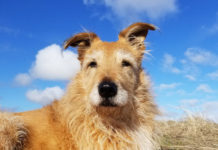