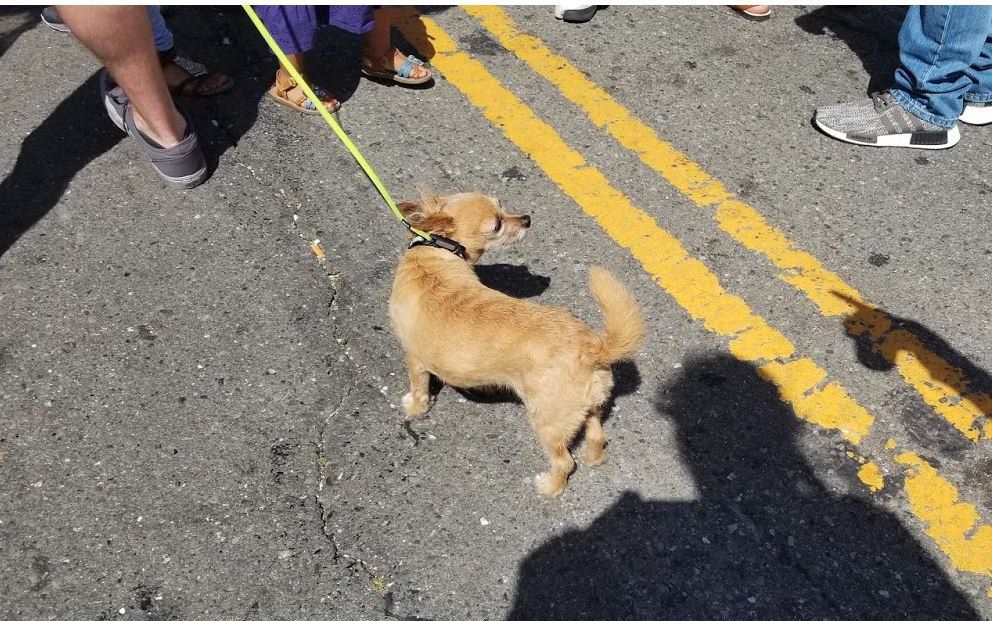 It’s only mid-May, but in many towns and cities, the street fair season has begun. I know, because I had the pleasure of attending one in the San Francisco Bay area town where I lived for a decade and where my son still lives. There were three bandstands with live music; tons of delicious food, beer, and wine; and dozens of booths full of gorgeous art and crafts, clothing, jewelry and more. And lots and lots of people, and lots and lots of dogs.

Big dogs. Little dogs. Multiple dogs on leash-splitters. Dogs in carriages, dogs in backpacks, dogs in purses, dogs on foot. All of them hot – because the weather was hot and so was the pavement – and most of them looking stressed.

Don’t get me wrong: dogs were allowed at the event. Every dog owner there had a perfect right to bring their dog to the street fair. And actually, I did not see a single dog fight or dog who looked like it was about to bite anyone.

I went to the street fair to look at art and jewelry and eat yummy food – not to train my dog. And I don’t think anyone else went there to train theirs.

I understand the impulse to be accompanied by your dog, I really do. I like bringing my dogs with me places – but only when they will be comfortable and when they’ll be neither distracting nor a distraction.

There are countless things that could go wrong: a stressed-out dog lashing out and biting a passing dog or child, a dog getting loose and running away in a panic, a dog getting heat stroke, someone stepping on a little dog (I saw it almost happen a number of times!), a dog developing a noise phobia after being forced to stay in a loud and stressful environment, some drunk person tripping on and hurting or scaring a dog. I just wouldn’t ever risk it!

I don’t have a particular point to make, other than to lament the fact that dogs seem to be accessories for many people. Whether or not the dog will benefit from – or be harmed by – the experience in any way doesn’t seem to be a consideration.