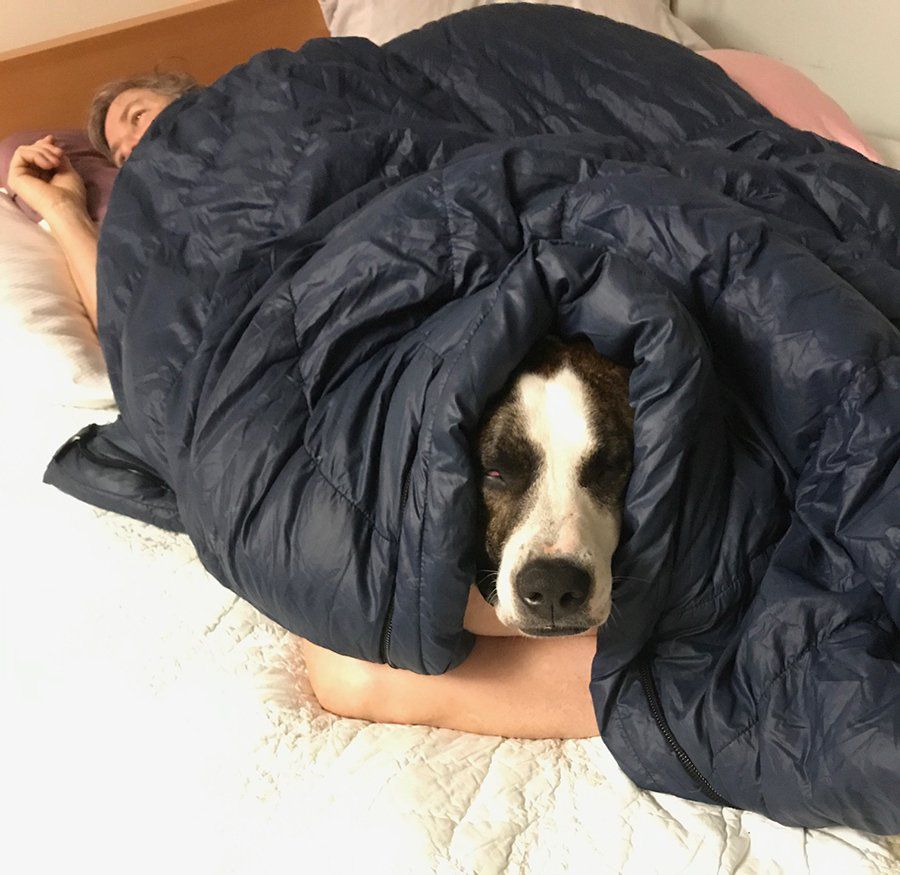 On May 23, 2018, my young dog Woody got skunked for what I think (and hope) will be the last time. Late in the evening, both of my dogs ran out of the house barking (we have a curtain screen door that allows them to do this). I got up to call them back indoors – and as I approached the kitchen door, that classic skunk stench was already wafting into the house.

As I came back to the kitchen door, my senior dog Otto was standing there, panting and looking proud of himself. I leaned down to give him a careful sniff, and then a deeper smell. He wasn’t the one who got skunked.

I went outside and called Woody, and heard nothing, though the skunk smell was VERY strong. I called again, and started getting a little alarmed when again, I heard nothing. And then I heard…something. I turned around and saw that Woody was standing almost right behind me, trembling, licking his lips, and drooling foot-long strings of drool. His mouth was all foamy, like he had been eating shaving cream. He must have gotten hit RIGHT in the mouth.

I ended up giving him not one but two baths with the so-called “magic anti-skunk solution” (1 quart 2% hydrogen peroxide, ½ cup baking soda, and a dash of dishwashing liquid, stirred together and then sponged generously over the freshly skunked dog). His head in particular still really smelled bad after the first bathing, so I repeated it, trying to get his face as wet with the solution as possible, without getting the stinging solution in his eyes and nose and all over his lips.

Like any dog, he licked his lips a few times while he was getting this bath – which is likely why, after I had rinsed him clean, toweled him dry, and turned my attention to cleaning up all the towels and empty peroxide bottles, I heard my husband yell from the living room, “Woody just threw up in here!” Oh, great! More to clean up.

Yes, I started shutting the kitchen door at night.

Not quite a month later, I was staying in Marin County overnight at a friend’s house. In the middle of the night, my friend’s German Wire-Haired Pointer, Luke, had started scratching at the door to go outside into her tiny backyard. She let him out, and went to the far end of her cottage to use her bathroom. I didn’t know any of that; I was sound asleep when I was awakened by a series of outraged-sounding barks, and then, darn it, that sickening skunk scent. I felt for Woody; he was sitting up on the bed next to me. I heard my friend call her dog from the bathroom, and I yelled back, “JAMIE! Luke got skunked!”

“Oh no! Luke!” she yelled back. I jumped up and, fumbling in the dark in the unfamiliar room, finally managed to turn on the light as I coughed and choked. The light revealed her dog standing in the bedroom with me, sneezing and sputtering. The difference between this skunk event and Woody’s last one was that Woody had been skunked at some distance from my house. Luke got skunked literally under my friend’s living room window, and in the tiny cottage, the smell was so strong that all of us present could barely breathe for a little while. I gagged as I ran for the front door, it was that bad.

But the most traumatized being in the cottage, I think, was Woody! After my friend and I had spent a couple of minutes turning on fans at either end of the cottage, trying to direct the bad air outside, and she got the peroxide and baking soda and a bucket and towels ready to give her dog a bath, I looked for Woody and found him cowering in a little heap of blankets on the couch, shaking hard and drooling long strings of drool. “Did he get skunked, too?” my friend asked, as I leaned down to smell him (as well as I could smell anything at that point). No, he wasn’t any skunkier than anything else in the house; he was just traumatized, I think, by the whole thing: the smell, the chaos, the bathing preparations. I ended up going back to bed before my friend was done with her bath, and to stop Woody’s trembling, pulled my sleeping bag over him and hugged him tightly, until we fell asleep again.

A few nights ago, my husband and I were watching TV, when Otto heard something and went bolting outside to bark. I got up to investigate; it was someone walking next to the road by our house and the crunching of gravel made Otto think someone was coming in the driveway. I called him back inside, and as I sat down again, I could feel the entire sofa shaking. Woody, who hadn’t even gone outside, was shaking and drooling with fear and apprehension over the potential skunk attack.

I’m very sorry that he’s been so traumatized by those two skunk encounters, but I really, really hope it has cured him of participating in these nighttime animal investigations, wherever we are.

Do you know any dogs who learned to not go after skunks? Did this education stick with them?