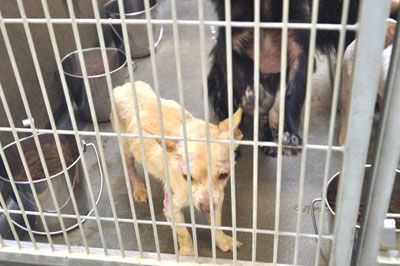 About a year ago, I became acutely aware of the fact that there are increasing numbers of animal “rescue” organizations that are doing anything but “rescuing” animals. I’m not talking about real rescue operations, where animals are well cared-for, the facility does not take on more animals than it can support in a healthy fashion, and the organization has a well-established and successful method of finding permanent homes for its charges. I’m talking about the places that end up in the newspaper, the ones that have spun out of control with too many animals, not enough money or caregivers, where the animals are found to be reproducing, sick, or dead.

I’d read news articles about this phenomenon, but I never saw the grim results of such an operation until 100-plus dogs from one were brought into my local shelter, the one where I volunteer in the kennels and on the Board of Directors. With a single exception (an emaciated St. Bernard), all the dogs seized from a local “rescue” were all small dogs. (This didn’t make sense to me until our Executive Director explained that small dogs are the easiest to place and cost the least to feed – handy if you’re profiting on the “adoption fee” charged for the dogs.)

Almost all of the dogs were thin; some were skin and bones. They were starving – which caused immediate logistical problems in caring for them. Because there were far more dogs than my shelter had individual cages or runs, we had to kennel them in groups. And it became immediately apparent that the dogs were accustomed to fighting for their food. To prevent fights from breaking out over the food, we had to leave completely full bowls of food in the kennels at all times for a few weeks – and leave more bowls than there were dogs in each kennel. Sometimes, in those first few days, the dogs would spontaneously start fighting over any bowl that was placed on the floor of the run, even if there were half a dozen other full bowls of food already present.

Something else I never realized: Full bowls of food all day X 100 dogs = cleaning kennels ALL day for weeks on end.

We also had to keep these little dogs completely segregated from the rest of the dogs in the shelter, which turned out to save the lives of all the dogs in the shelter, after some of the new dogs proved to have distemper. Most shelters have a standard protocol in place calling for euthanasia of all the homeless animals in the facility if distemper breaks out. Through assiduous infection control, we were able to contain the infection. Only the seized puppies that were less than six months old had to be euthanized.

Puppies? In a “rescue” operation? Yes. There were several litters, and several more pregnant dogs seized from the “rescue.” Reproduction is an abomination in an environment with more dogs than one can feed.

The dogs had a wide array of health problems, such as mange and other skin ailments; cuts and bite wounds (no doubt from their desperate fights for food); infected ears and eyes and paws. One sweet old Cocker Spaniel had end-stage cancer. Another mixed-breed senior couldn’t stand up, her arthritis was so bad.

I’m writing about this for two reasons: One is that the case I’ve described above is about to go to trial. I plan on attending; several of the animal control officers and shelter staffers have been subpoenaed.

The other is because I just received a link to an article about an even bigger case, involving almost 350 dogs confiscated from “One More Chance Rescue and Adoption” in Piqua, Ohio. Seventy six dead dogs were also found on the property.

I receive articles like this at least a couple times a month. Cases like these can strain legitimate animal control agencies or shelters to the breaking point.

Whatever you do, please don’t offer any financial support to “rescues” or “sanctuaries” that you haven’t seen personally, or that are not open to the general public for frequent inspection. You may be inadvertently supporting a death camp for dogs and cats instead.