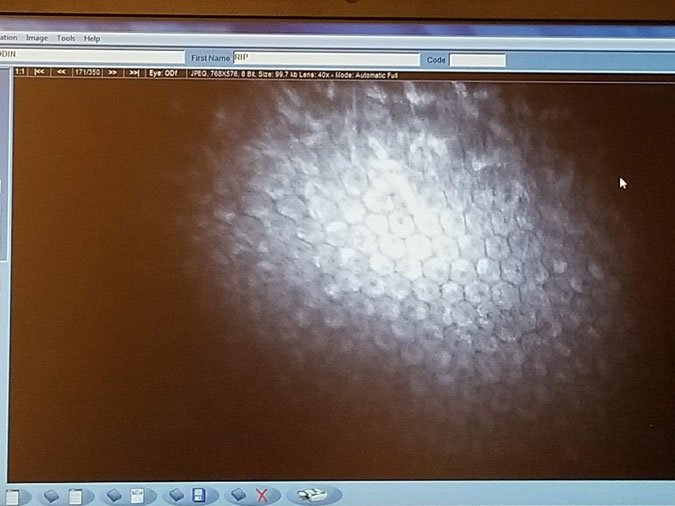 I have been trying to think of what to write in this week’s blog post all day, and while there are any number of topics running through my head, there are so many different things requiring my attention at the moment, I haven’t been able to think any single topic all the way through! So once again I will just update you about a few things.

Last Friday, I took Odin back to the UC Davis Veterinary Medical Teaching Hospital (VMTH) for the in-depth eye exams he would need to participate in a study on a drug treating corneal endothelial dystrophy. The exams were meant to serve as the baseline for his eye condition before we started treating his troubled left eye with the medicine that the faculty veterinary ophthalmologist will be studying.

The technicians who conducted the tests were completely charmed by the little guy; he’s the youngest dog they are working with for the studies (and I hope, one of the best behaved).

Odin had the following procedures:

A pachymeter is a medical device used to measure the thickness of the cornea. His right (unaffected) eye has a quite normal thickness. The cornea of his affected left eye is about twice as thick as it should be.

This powerful tool produces images of individual corneal epithelial cells. Certain eye diseases cause these cells to malfunction, and the change in their shape and size can indicate some of these conditions. The technicians got beautiful images of the cells in Odin’s right eye, but the tool couldn’t produce good images of these cells in the affected eye; the cornea is just too thick.

This is an imaging tool that captures high-resolution, cross-sectional images of the anterior segment of the eye – and this was the tool that finally enabled a terrific representation of Odin’s troubled cornea.

The OCT revealed some sort of strange bubble in the left eye – a place where the two innermost layers of the cornea (the endothelium and Descemet’s membrane) have separated. Though we’ve been mystified from the very onset of Odin’s eye trouble as to its cause, and a number of things have been proposed, the faculty vet’s current thought is the eye suffered an injury that triggered some overreactions. This veterinarian actually used the same tool to examine Odin’s eye on his very first visit to the VMTH, about a week after the original onset of his eye problem, and this bubble or separation was not seen at that time.

So, the news is sort of mixed. He doesn’t actually have the exact condition the Japanese medicine is being tested for (corneal endothelial dystrophy) – but on the other hand, the vet thinks the medicine might help, and certainly can’t hurt. So he’s not going to be officially enrolled in the study – but, generously, she is going to continue to follow his case, and provide more examinations to see if the medicine (along with the other medications we’re using to treat the eye) make an improvement. In Japan, where the medicine is already approved, it has been found to be able to reduce corneal thickness, haziness, and edema, and promote corneal endothelial cell proliferation. All of those actions may well help Odin’s eye.

And she assured me that she would discuss his case with some human ophthalmologists to see what else they would recommend (besides a corneal transplant, which is certainly what would be recommended if Odin was a well-insured human patient).

On Saturday, I attended a training session conducted by the North Valley Animal Disaster Group (NVADG), as part of my increased interest in improving any future local disaster response. This session was about handling dogs and cats in an emergency – something I got a lot of experience with when volunteering in the emergency evacuation shelters during the Camp Fire disaster. And it was held at the shelter where I have been volunteering for the past decade, so that was fun.

I didn’t learn anything new about handling dogs but did learn a few tips and tricks for handling stressed cats. Mostly, I was very pleasantly surprised by the turnout at the training event; I’d say there were at least 80 people present – all potential new volunteers in case of another disaster. I’m looking forward to a training session scheduled for next month, which is supposed to train volunteers for managing a small animal emergency shelter. It’s that operation that I felt most critical of during the Camp Fire, so I’m eager to see what training is provided, and where suggestions for improvements might best be directed.

On Monday, it was my senior dog Otto’s turn for more medical tests. Otto has been drinking tons of water, and the first round of tests, blood panels and urine tests came back without telling us a lot more than we already knew. His blood results looked great, and his urine actually looked good, too, except for the fact that it’s consistently more dilute than it ought to be. My veterinarian suggested that the next step in the investigation should be an ultrasound, to check on the size and condition of his kidneys and other organs.

The ultrasound found two abnormalities: a small mass on Otto’s liver, and another small mass situated somewhere near his spleen and pancreas… But his kidneys looked fine. The speculation is that something – perhaps one of the masses? – is causing a hormonal change that is causing the kidneys to not work properly. She recommended a fine needle aspiration (FNA) of the masses, guided by the ultrasound, so we could send them out to be cultured, in hopes of learning more about what they are comprised of. I get those results tomorrow. The next step might be a CT scan, again, in order to learn more about these abnormalities, or, depending on what we learn from the cultures of the tissue sample, surgery.

More than a month ago, I saw a Facebook post from a researcher who, using a grant from the National Science Foundation, wanted to interview people who were involved in the animal rescues/sheltering from the Camp Fire disaster, for a project described this way:

“The NSF Pets Project is a research project prompted by evacuations during Hurricanes Harvey and Irma. The two lead investigators are Dr. Sarah DeYoung at the University of Georgia (UGA) and Dr. Ashley Farmer at Illinois State University.

“Our main research aim is to identify social and organizational factors that affect the effectiveness of pet evacuation in disasters. Findings from these data may be used to influence future practices and policies related to animal welfare in disasters.”

I said, sign me up! I’m thrilled that someone is working on a project that could improve practices and policies in future disasters. So on Wednesday, I got to meet with Dr. DeYoung and several UGA students, who came to Chico, California, for several days of interviews. Dr. DeYoung has also studied “decision-making for companion animals during the evacuations caused by disasters” including our California wildfires (both local to me and in other parts of California); Hurricanes Harvey, Irma, and Florence; as well as the lava flows in Hawaii. I look forward to following her research – and, I hope, helping publicize any helpful recommendations for improving emergency animal evacuations.

Next week I’ll be attending the Global Pet Expo, supposedly the pet industry’s largest annual trade show with more than 3,500 booths. I’ve never been to this particular show, which is held in Orlando, Florida; the next largest show (SuperZoo) has always seemed plenty big. At this show, however, I’m hoping to spend most if not all of my time with representatives of pet food companies – in particular, gathering information about the pet food industry’s response to the reports of a spike in cases of dilated cardiomyopathyin dogs.