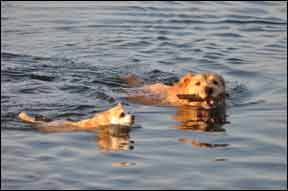 My dog, Otto, has never been all that excited about fetch. Certainly not like my previous dog, a Border Collie fetchaholic named Rupert. You could make Rupert leap to his feet and run around to look for a ball if you just mimed the very first part of a throwing gesture, drawing your hand back over your shoulder.  Otto will chase something if you throw it – but then he may or may not pick it up, and if he does, he is unlikely to bring it back to you.

Only when the planets are aligned just so — the fetch item is one of his favorite toys (only certain squishy balls and squeaky stuffed animals, once in a blue moon a flying disc); it’s not too hot; he hasn’t been for a run for a couple of days – will he reliably retrieve more than once or twice in a row.

This all changed since Tito revealed his previously hidden talent: he LOVES fetching sticks thrown in the water. Chihuahuas are not renowned for their fetching, and for the past year, we knew Tito to chase, but never return with the tennis balls he’s always carrying around.

But then he discovered stick-fetching-in-the-water, and now he’s like a miniature Labrador, diving in again and again, and always bringing the stick back to you, dropping it on your feet and standing there dripping and shivering and whining until you throw it again.

Otto has NEVER chased a stick thrown in the water — until he saw Tito getting a lot of attention for it. And now he too fetches sticks in the water – although he’s still likely to come out of the water with the stick and run off with it, trying to elicit a game of “Catch me if you can!” from the other dogs (and dropping the stick somewhere you can’t find it when you’re not looking).

However, as a long-time and repeat anthropomorphizer, I think it’s the competition for attention that has turned my distracted wader into a hard-swimming retriever.