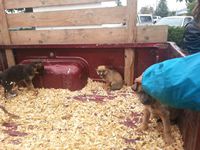 So, a couple of weeks ago I wrote about going to the grocery store late one Sunday evening and being completely bummed about a couple who was selling puppies (who looked too young, and not well cared for) in front of the market. I thought about all the things I should do and say at that time – though at the time, I did nothing. I was too tired and hungry and it was rainy and late . . . But the memory of those chilled puppies, numbed by the intake of too much stimulation, has stayed with me.

Last Saturday I had a redemption round. Every month I present an orientation to prospective volunteers at my local shelter. In the middle of my talk, an elderly woman knocked on the glass door of the shelter. I opened it to tell her that the shelter wasn’t actually open yet, and she said, “I just wanted to let you know that some fool is selling puppies in the parking lot of Tractor Supply.” I thanked her – and then had about two hours, while busy with the volunteers, to wonder if the guy would still be there in a couple of hours, and what (and how!) I would say to him it if he was still there.

On weekends in my small town, the animal control officer is called out only for life-threatening emergencies. It’s a two-hour minimum overtime call, and a costly part of the city’s animal control budget. No one considers an illegal puppy sale an emergency worthy of two hours of officer overtime, and the police don’t do this kind of call, either. On a weekday, they would notify the animal control officer instead. If the puppies’ lives were immediately endangered, it might constitute an emergency. As it was, though, it was just the kind of situation that called for an assertive citizen interaction. Which I both hoped to be capable of, given so much mental preparation, and hoped that I wouldn’t HAVE to do; I hoped he’d be gone if I went there when I was done at the shelter.

Well, dang, he was still there hours later when I pulled into the Tractor Supply parking lot, just half a mile from the shelter. Thanks to my preparation, as well as the comments from the blog a few weeks ago, this is what I did:

To this, he replied, fairly calm, “I have the manager’s permission. I don’t see what the problem is.”

He replied, getting annoyed now, “I don’t see how that’s my problem. I have permission.”

And then I went to buy my chicken scratch, and when I went out to the parking lot, thank goodness, the guy was gone! (Thank goodness because calling the police on a Saturday was a bluff; they wouldn’t have come.)

I’m sad that I had the opportunity to practice “what should I do” so soon, and sadder to learn that the guy did NOT take the pups to the shelter, but glad that I tried to get the guy to do the right thing. 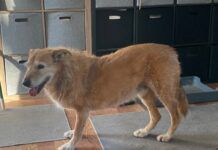