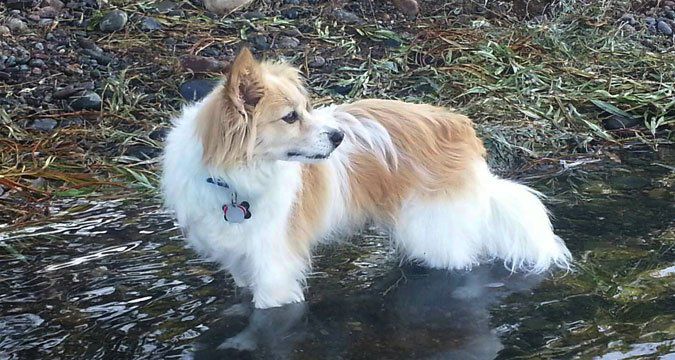 A few years ago, I was dog-sitting for a friend while her family traveled out of the country for a few weeks. I’ve met the dog, Leila, a Papillion-mix, a number of times, but just in short visits.

It was the height of our hot, dry summer during Leila’s visit, and when those conditions are in effect, I often take my dogs to swim in the Feather River, which flows through my town, just a couple blocks from my home. I took some pictures one evening, and posted them on Facebook, of the dogs, including Leila, wading deeply in the water.

Later that day, there was a comment from Leila’s owner: “Leila went in the WATER? She NEVER touches water!” I laughed, because it seemed quite natural to me that she’d go in the water. I didn’t even notice her response to the water; wading in the cold water when the temperature was over 100 degrees seemed like the only sensible thing to do. But Leila’s owner couldn’t get over this behavior, that she had never seen in seven years of owning the dog and taking her to other creeks, streams, rivers, and the ocean.

I bring this up because I’m out of town for two days, and my sister is caring for my dogs. And I just had a report about Woody’s behavior that surprised me. It wasn’t the fact that he had chewed up my hard foam back roller; he’s been eyeballing it for some time as a potential toy, and I do recall I left it on the living room floor. My fault. No, it was the report that when my sister brought him to her house to play with her dogs, he was running through her home so fast that he leaped to the back of her sofa, and his momentum actually made the sofa (which has not one but two recliners hidden in it) fall over backward! WHAT?

My sister was laughing so hard when she was telling me this, that she didn’t hear my consternation at first. PAM! Why are you letting him tear through the house like that? She just kept repeating that she thought it was so funny to see my goofy, exuberant young dog so joyful about the abundance of new toys to play with, and so happy to visit. Pam has been my go-to dog-sitter for Woody since he was a pudgy puppy, and he adores her and her treat- and toy-filled home where (seemingly) everything goes. She never admonishes him for (apparently) ANYTHING! I could see the scene in my mind’s eye, and after I got over my surprise, I had to laugh, too. After all, I know this isn’t anything he’s going to try at MY house.

I’ve asked before, but the answers are so interesting, allow me to repeat the question: Have you ever been surprised by a dog sitter’s report about your dog’s behavior?