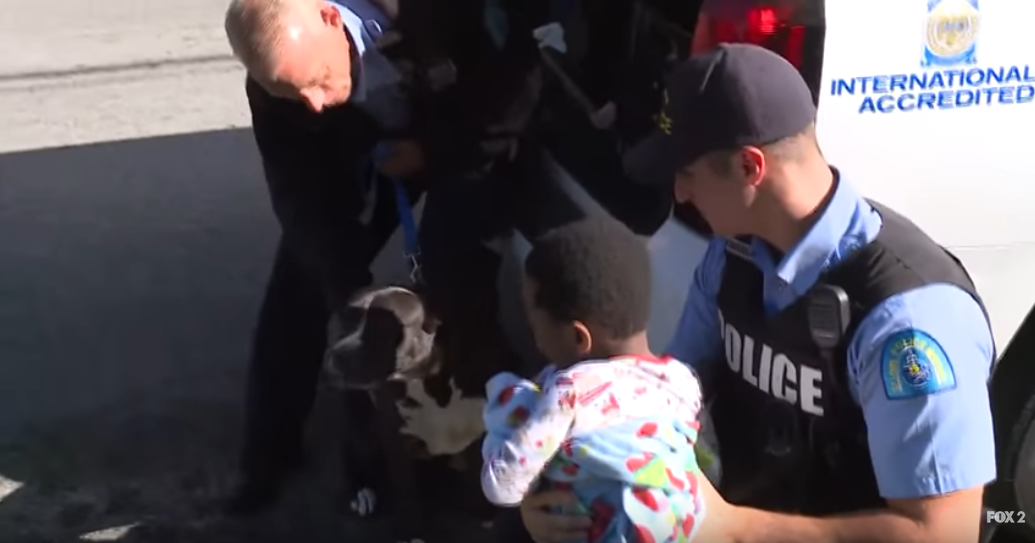 Have you ever read a short little news piece – a bit of journalistic fluff – that you nevertheless couldn’t stop thinking about? Maybe there’s something that just doesn’t make sense, or there’s a loose end in the story – for some reason, it’s just keeping you up at night. Most of the ones that haunt me, as you might imagine, have a dog in them somewhere.

I’ve got one such story in my head. Let’s see if it bothers you as much as it does me.

This piece, headlined “Missing Boy Found Wandering St. Louis Streets With Protective Stray Pit Bull by His Side,” was being circulated on Facebook, and many of my friends were sharing it. The People magazine story was generated by a story aired on the 6:00 pm television news on October 1 by a Fox affiliate in St. Louis.

According to the Fox news piece, a two-year-old boy was spotted wandering on a St. Louis sidewalk by a woman who was walking her dogs early in the morning of October 1. The boy was wearing pajamas, but no shoes, and he was unaccompanied – at least, unaccompanied by any humans. He was toddling around in the company of a large pit bull-type dog.

The woman, who wished to be anonymous, was interviewed on camera (with her face obscured) by the Fox news crew. She said she knocked on doors all up and down the street, keeping the toddler and his pit bull friend in view, hoping to find someone who recognized or was missing the child. She also posted an alert to a neighborhood social media web site – and somehow, it was there that the father of the child recognized his son, and ran to meet the anonymous Samaritan and recover his son.

It’s unclear from the story whether the father knew his son was missing from the home before he saw the post. This is but one of the missing details of this story that are bothering me.

In the news clip, police officers are seen holding the toddler and speaking to the boy’s father, but the news piece doesn’t mention whether the anonymous woman, the boy’s father, or someone else had called the police, or what other role the police may have played in the story. That’s also a mystery.

But the biggest mystery of all is the dog. Despite the dog’s major presence in all the headlines of all the iterations of the article, which was picked up by dozens and dozens of news sources across the globe, the fact that the dog who stayed by the toddler’s side, reportedly for hours, was a stray dog – not the family’s own protective dog, but a dog who was unknown to the family – got very little attention. Hero of the story, presumably kept the boy safe – a stray dog. Wow!

And then this, a couple of suspicious little throwaway lines at the end of the piece. One of the news anchors who introduced the taped segment says at the very end of the segment, over film of a policeman putting the pit bull, now on a leash, into a police car, “By the way, the little guy there, Taylor, says he really liked the pit bull who was like a guard for him; he kept saying, ‘Puppy!’ while he was being reunited. We’re told St. Louis city police might be adopting that guy.” Awww! A double happy ending?

Well, after a day of that little news piece just driving me nuts, I wanted to know: Who was that hero dog? And is some St. Louis policeman really going to adopt him?

So I reached out to the St Louis Metropolitan Police Department; they actually have a Facebook page that is monitored by media relations people. I sent them a link to the People magazine story and asked, “Do you have more information about this story, or the dog, that I could share with my readership?” The answer came in just a couple of hours. “The dog ran from the officers and animal regulation was notified.”

So, despite the filmed footage of the leashed dog cooperatively hopping into the back of a police cruiser . . . we’re to believe he “ran from the officers.” I’ll never stop wondering about that dog.