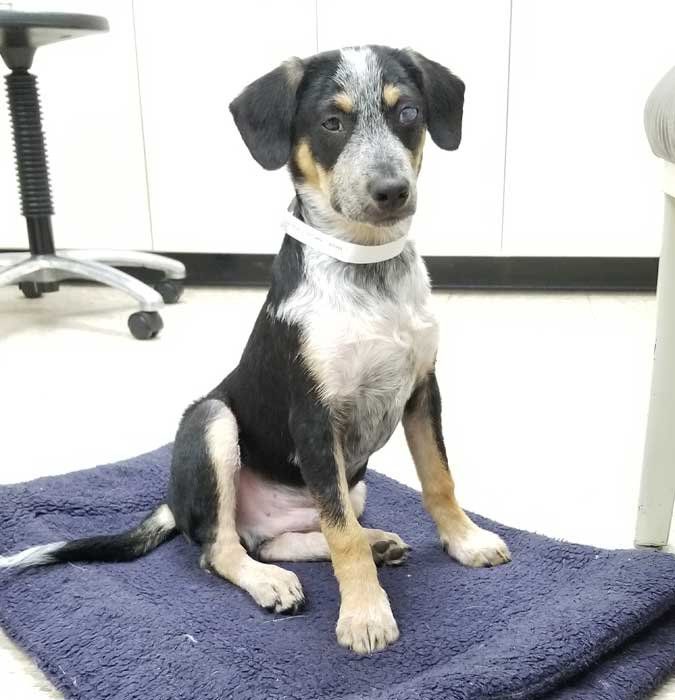 When I last told you about the puppies, I was at the U.C. Davis Veterinary Medical Teaching Hospital (VMTH) with the largest pup, who has something going on with one of his eyes.

Thank goodness I relentlessly photograph these pups. Thanks to the automatic online backup of the photos from my phone, I can recount what is otherwise a blur in my brain:

Three of the pups underwent spay/neuter surgery on December 28. I picked them up from the shelter and stayed with them at my office/house that night. I posted their photos on the shelter website, to let people know they would be available soon. By the morning, all three were playing and eating/drinking/pottying normally, and I felt fine about taking them to the shelter for the five hours that the shelter is open on Saturdays, in hopes of getting one of them adopted. But there were no takers that day.

I did, however, receive an inquiry from someone who saw the shelter’s Facebook post, and wanted my best opinion on how big the puppies might get. It turns out that Bethany was someone whose house burned down – with her dogs and cats in it – in the Camp Fire disaster. Oh my god.

After weeping through a typed, direct-message conversation with her about that, we discussed the puppies. She said she saw the puppies photos, and it was the first time in a month she considered getting another dog; given their own tragedy, she and her partner, Drew, would both like to help an animal touched by this local disaster. But she and Drew and their son will be moving into a mobile home in a park that has a strict limit on the size of the pets they will accept. I am completely uncertain about the size that these pups might mature to, but I invited them to come to my office/house to meet them anyway.

The whole family arrived the next day, and she introduced me to Drew and their son . . . Odin!!!

We decided that the pups might end up as too large for her housing situation, but I promised I would keep an eye out for an adult dog of an appropriate size at the shelter for them. They would ideally like to adopt a dog who lost his or her home, too, and since there are lots of people having to rehome the pets who were evacuated in time from the fire, or who were rescued after the fact, it’s likely we will be able to make this sort of connection, to help heal them all.

And I decided I needed to start calling the pup with the eye injury Odin. As hard as I have worked to save this eye, I have to face facts. And the coincidence of running into a person named Odin at that particular moment was remarkable; it felt like a message. I have never met a person named Odin in my 55-year-old life!

As I write this, we just got back from a follow-up visit to the VMTH. As we checked in at the front desk, I asked them to update the pup’s records to reflect his new name. It seemed like acceptance.

We saw a different veterinary student and resident veterinary ophthalmologist from the last visit, as well as a member of the veterinary ophthalmology faculty. All of them were suitably impressed with little Odin’s manners; every time they entered the exam room after a delay, he was curled up asleep on his little mat, and got up to greet them in a polite but friendly manner. Only the faculty vet seemed to recognize the significance of “Odin”; he chuckled when he heard the pup’s name.

And then, after examining the eye, he held Odin’s face in his hands and said, “Don’t trade your eye away just yet, young man.” And then he turned to me and said, “I think the eye is looking very promising. It’s true that it ulcerated again, but it’s healing inside nicely. Dogs heal faster than humans, and puppies heal faster than adult dogs; he’s got that going for him. Let’s make a few more changes to the medications, and have your local vet check his eye pressure in four days and let us know what the pressures are. If they are good, let’s see you back here in two weeks. And keep up the good work, both of you!”

Champ? Odin? We shall see. I will keep you posted, of course!