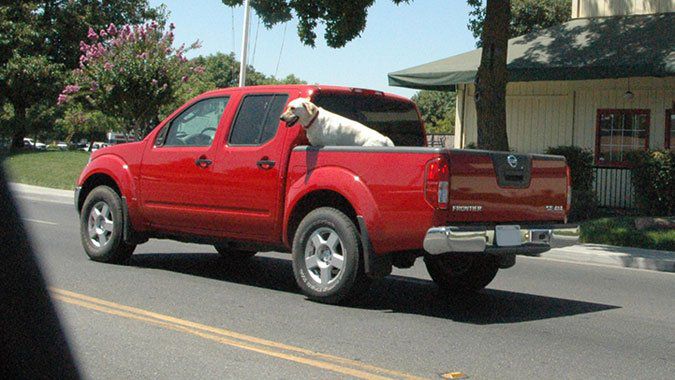 This morning I got up super early, so I could feed the foster puppies and mama, clean their pen, and still have time to drive an hour to pick up my 8-year-old niece, whom I was in charge of for the day. Her school year ended last week, and her camps and other organized summer activities start next week, and several people are spending a day with Ava this week to bridge the gap.

It’s a beautiful drive from my northeastern Sacramento Valley small town to her historic gold-country town, nestled in the foothills of the Sierra mountains. I drive through peach orchards and rice fields, and then start climbing in elevation into oak-studded foothills with cattle grazing the already dry, summer-brown grass, and up into an area whose topography is hidden under a solid canopy of tall pine trees. I like the drive a lot.

Except, this morning, as I drove along the last of the rice fields about a half mile from the two-lane highway that would take me up into the foothills, I saw an obviously lost dog on the road: a well-muscled, short, mouse-colored bully breed dog, an intact male. This isn’t your standard farm or ranch dog – and in case there was any doubt at all, the fact that he was wearing a harness, to which a four-foot leash was attached, ruled out the likelihood (for me) that he was a local dog who had roamed off his property. Most likely, in my opinion, was that he was in the back of someone’s truck, and rolled off when the person made the sharp turn onto or off of the nearby highway and onto or off of this bumpy farm-country road.

When I spotted the dog, he was trotting fast toward my car, right in the middle of the road, and there was a car stopped behind him. The driver, an elderly lady, had her window rolled down and she waved her arm out the window: “Look out!” I think she was trying to say. I stopped my car on the side of the road with the dog between us, and the dog stopped trotting. He looked left and right, and I could tell he was trying to decide which way to run. I got out of the car slowly and called brightly to him. “Hey pup! Buddy, come!” But as soon as he saw me he bolted, past the lady who was IN her car, and headed for the highway. Crap.

So I jumped in my car, sped past him, and stopped on the side of the road again, blocking his access to the highway. I looked back, hoping the other lady would get out of her car and help; she had driven off. But it didn’t matter, because the dog hadn’t hesitated. This time, when I got out of the car, he took off sideways, trotting away down a dirt road between two rice fields. I thought, maybe he would come to a dog. My dog-savvy young dog Woody was with me. I looked both ways, and called Woody out of the car. We trotted together a few feet up the dirt road, and he could see the big brawny dog trotting ahead of us by 150 feet or so. “Go get him!” I said to Woody, and Woody took off at a racehorse pace; he’s fast!

The dog looked over his shoulder when he heard Woody running toward him, and was alarmed enough to spin around to face Woody. I wasn’t worried; Woody has not yet met a dog that he could not either charm, or run away from. In this case, their tails went up, wagging, they sniffed, Woody did a couple of popping sort of playful moves, and for a minute, they just stood there. Woody looked back toward me: “Now what?” I called, “Good boy! Woody, come!” My fingers were crossed, as I trotted backward toward the car in what was meant to be a most inviting way.

No dice. Woody came at a gallop, and the dog headed off further into the rice fields.

I went back to the car, tearing up at the dog’s prospects. I had to get to my sister-in-law’s house so she could get to work. I couldn’t go driving off onto dirt farm roads – and maybe, he would approach a farmhouse and be less frightened of people in that environment. On the other hand, maybe he would head back to the highway and get hit by a car. Ugh.

I have often wondered what makes so many dogs just TAKE OFF when a human approaches or addresses them when they are lost. And I have also wondered: Would MY dogs come to a strange person if they were in a panic, but someone was addressing them? “Hey Buddy! Come here!” I just don’t know. Could you teach your dog to come to anyone who called him (obviously not using his name, which a stranger would not know)? How could you SAFELY teach your dog to come to strangers in a strange place, when you were not present? Trainers, would you weigh in?

Also, last but not least: I’m sure this is preaching to the choir (our audience is more educated than most), but please make sure that anyone you know who drives with dogs in the back of their truck has their dog crated or secured with cross ties fastened to a harness. I feel so strongly that the dog had fallen out of a truck; he was so near a corner that many drivers take at a fast clip, and 10 miles from the closest town. I just HATE it when I see people taking that risk with their dogs.