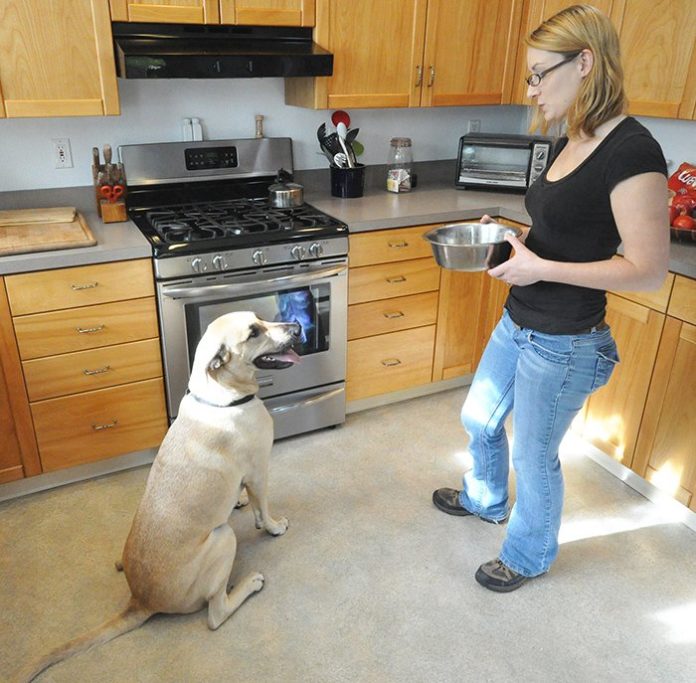 I’m lucky to have two dogs, one small and one large, who can come galloping into the house from a hard romp, run to the water bowl, and drink their fill, and hardly leave a drop on the floor.

I’m reminded of how lucky I am every time my son’s dog comes to visit – as I move the water bowl outside and grab the first of a series of dog towels from the bottom shelf of the linen closet, the stained, frayed-edge, holey towels kept just for dog baths and… well, this! Cole is incapable of drinking even a little without redistributing half of it around the kitchen. It wasn’t such a big deal in summer – it’s so dry here, the water would evaporate in no time. But now, with cold floors and me walking around in socks… Darn it, Cole!

I mentioned a while ago that I had a lot of visiting dogs for Thanksgiving, including a Boxer. She gets forgiven for the sloppy drinking. I don’t know how a dog with that sort of lippy anatomy can drink without half of the water going every which way. Cole’s problem is not anatomical; though he’s at least half hound, his lips aren’t pendulous enough to be the cause of his problem. He’s more of a stylistically poor drinker — a distracted drinker. If anything, and I mean anything, crosses his brain while he’s drinking, he will walk away from the bowl to investigate that thought, even as his tongue still churns and water pours from his mouth. He’s such a dork!

My friend Christine was telling me the other day, as we watched her big dog Bronco slurping water all over my deck outside, that when he was a puppy, he would always stand in the water with his two front feet when he was drinking. And then, of course, not only drool the water all over her kitchen, but also track it all over on his big paws, too. She tried putting the bowl up on a stepstool – once. Splash! Well, it’s a good way to get a person to mop the floor. It probably needed it anyway. Fortunately, he’s now too large to reach the bowl while his feet are in it.

I just saw this video on the New York Times site, footage from a study in which researchers are examining slow-motion footage to see exactly how dogs pull water into their mouths. After watching it, I’m amazed they manage to get much water down their throats at all!

Does your dog have a drinking problem? Would you like to talk about it?