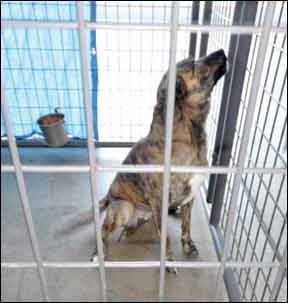 If you met Bonnie today, there’s a 95 percent chance you could greet her without having her pee on the floor. That wasn’t always the case. In fact, when we adopted the six-month-old Scorgidoodle six years ago her submissive urination behavior was so extreme I awarded my academy students extra credit points if they could greet her without making her pee. Only a few students earned those points the first year.

In fact, the adorable Bonnie had been surrendered to the shelter because her owners “couldn’t housetrain her.” Far too many dog owners mistake submissive and excitement urination as a house-training problem when they are actually behavioral issues. Sadly, many dogs are punished for these presentations of inappropriate urination; in both cases, this is the worst thing you can do, as it is highly likely to make the behavior worse, not better. 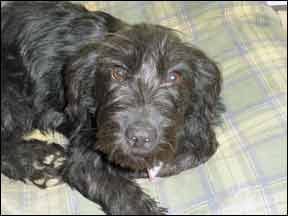 Some behavior professionals consider excitement and submissive urination to be on a continuum of the same behavior, while others make a clear distinction between the two. These are both involuntary behaviors, meaning the dog is not deliberately house soiling, but rather simply reacting to conditions in his environment. The behavior is not under his control.

In both cases, the first step is a trip to your dog’s veterinarian, to rule out any medical or physical causes for or contributors to the behavior, such as a urinary tract infection. Assuming no medical condition, the next step is behavior modification. Of the two behaviors, excitement urination is generally the easier to resolve, so let’s look at that one first.

This is the canine equivalent of, “Whee! I’m so happy and excited I peed my pants!” This behavior is seen as simple immaturity, particularly common among young, exuberant dogs of many breeds and either gender, who have not yet developed complete neuromuscular control. The dog sometimes doesn’t even squat (or lift a leg), and may urinate while standing, walking, running, or jumping up and down. The best solution is tincture of time; many dogs simply outgrow the behavior as they attain physical maturity. Additionally, you can:

1. If possible, greet your dog outside, and have guests greet him outside. This won’t reduce the excitement urination, but will reduce clean-up chores.

2. Take your dog for more-frequent-than-normal walks so her bladder is always as empty as possible.

3. Teach your dog to relax, by calmly reinforcing relaxed behavior (lying down; standing calmly with four feet on the floor; sitting quietly to greet people). A relaxation protocol such as the one developed by Dr. Karen Overall can be very useful.

4. Provide your dog with more aerobic exercise. Off-leash hikes; playing with other dogs (where safe and legal); and good, hard fetching sessions with a ball or flying disk are all great ways to expend the excitement energy that can cause loss of bladder control. Tired dogs don’t get as excited as underexercised ones!

5. Greet your dog calmly, with quiet body language and a low tone of voice, and/or or don’t greet him at all until he calms down.

6. Instruct visitors to greet your dog calmly, with quiet body language and a low tone of voice, rather than encouraging excitement. (Teaching other humans to alter their dog-greeting behavior is often the most difficult task!)

7. Calmly ignore any damp greetings, and quietly ask your dog for a relaxation behavior you’ve already trained that is incompatible with excitement, such as lying in “sphinx position” or on his side, head on the floor.

8. Do not punish your dog – or yell or behave angrily, even if it’s not directed at him – if he makes a mistake.

This behavior is more common in young dogs than older ones and in more females than males, and it appears more frequently in certain breeds, including Cocker Spaniels, Golden Retrievers, and Dachshunds – but can occur in any dog. Prime candidates for submissive urination are dogs who are also otherwise behaviorally submissive. Unlike excitement urination, a dog who pees submissively may also offer other appeasement behaviors such as a lowered body posture, flattened ears, rolling over, licking, and looking away. The dog may offer a subdued greeting or greet with some excitement.

The more assertive a human’s approach to a pee-prone dog, the more likely a puddle is to appear. Hence, men – especially large, deep-voiced men – are more apt to trigger urination than are soft-spoken, small women. Fast, direct, exuberant approaches by any human are riskier than slow, calm, approaches. Direct eye contact, patting the dog on top of his head, and bending over the dog are more likely to trigger submissive responses – including urination – than are averted eyes, kneeling sideways, and scratching the dog under his chin or on his chest.

Many dog owners are surprised to discover that submissive urination is a natural, normal behavior. It probably stems initially from the mother’s practice of stimulating reflexive urination in young puppies by licking the urogenital area. In the canine world, it keeps a lower-ranking member of a group safe from a higher-ranking member. The dog who squats and pees when greeting another dog sends a strong, clear message, saying, “I am not challenging you, I acknowledge your superiority, there’s no need to hurt me.” It usually works well, with other dogs. With humans, not so much. I try to convince my clients that their submissively peeing dogs are actually giving them a huge “You da boss!” compliment, in an effort to change their perception of – and response to – their dogs’ behavior.

While submissive urination behavior is innate, and occurs in many puppies up to the age of six to eight weeks in the presence of perceived threats to their safety, it normally ceases pretty quickly as the pup matures and gains confidence. However, it is exacerbated and more likely to continue into adolescence or even adulthood if it is mismanaged with inappropriate punishment or excessive control by an overbearing human or dog.

A pup who is punished by his owner for normal housetraining accidents (or other typical puppy transgressions such as chewing) may start offering submissive urination in anticipation of the punishment associated with his owner’s presence. Eventually, any time the owner (or another human) looks at, walks toward, reaches for, or touches the pup, he may urinate. Therefore, to prevent the development of submissive urination in your growing pup, manage his environment to prevent exposure to overbearing, punishment-oriented humans, and limit his access to dogs who may behave aggressively with or bully him, or be otherwise inappropriately assertive.

If it’s too late for prevention, or you are dealing with submissive urination despite your appropriate environmental management, all is not lost. It is possible to modify submissive urination, although it can take a healthy helping of time, patience, and commitment. Here’s how:

1. Whenever possible, greet the dog outdoors. Have someone let him out to greet you in a fenced yard or other safe area when you arrive home. If no one else is home, ignore the dog until you let him out, and then greet him outside.

2. Keep your greetings calm. Rapid body movements and loud or excited voices are more likely to trigger a release of urine in both submissive and excitement urinators. Move slowly and speak in a calm, soft voice. Have all family members and visitors follow the same behavior guidelines. The more consistent and successful everyone is in not triggering the behavior, the sooner it will go away.

3. Take him out frequently to pee outdoors. A full bladder releases more easily – and makes a larger puddle – than an empty or near-empty one.

4. When you do greet, either indoors or out, turn sideways to the dog, kneel down with your upper body straight rather than bending over, avoid direct eye contact, let him approach you, and scratch him under the chin rather than petting him on top of the head or on the back of the neck.

5. If an accident does happen, do not react verbally or physically. Calmly invite the dog outside and then clean up the puddle.

6. Give visitors treats or a toy to offer to your dog. This encourages the dog to increase body height and move forward (more assertive behaviors) and gives guests something to do other than pat the dog’s head.

7. Teach him to target. Like taking a treat, having him target his nose to your hand encourages him to offer a more assertive behavior in greeting. Invite your guests to ask him to target to their hands – open palm, fingers pointed down.

8. Implement other confidence-building protocols such as “Find It” and “Treat and Retreat.” (For more about these bravery-building exercises, see “Building Your Dog’s Confidence Up“.) When you can’t control the behavior of your visitors, perhaps during a large party, keep your dog crated or closed in a safe room, where he won’t be subjected to urination-eliciting behavior.

9. Use one of the various doggie diaper or belly-band products that are availableto catch the urine and prevent damage to carpets and floors while you work on modifying the behavior.

10. Remember that your dog can’t help it. Reminding yourself that he cannot control his response helps you to avoid getting angry and minimizes the possibility that you may inadvertently send body language signals that tell your dog you are upset and as a result trigger more submissive urination.

12. If modification efforts are not successful and the behavior continues into your dog’s adulthood, consult a veterinary behaviorist or behavior-knowledgeable veterinarian about the use of medications that can increase the dog’s general muscle tone and control, including the muscles of the urethra.

If you have a submissive or excitement urinator, you can be very optimistic. Most dogs can overcome these problems relatively easily with appropriate management and modification techniques. Our beloved Bonnie, now almost seven, has been one of the most persistent cases I’ve ever encountered. In addition to her submissive urination, she is one of the less reliably housetrained dogs I’ve ever owned, supporting the theory of weak urethra muscles. She is still crated at night, to ensure an accident-free sleep time.

However, I no longer award extra-credit points to academy students for pee-free greetings. At one time so sensitive that simply walking toward her could trigger a puddle, Bonnie is now mostly pee-free when met with normal low-key greetings. (I do still warn students of the need to greet her calmly.) If I try, I can still elicit a small puddle from her in one circumstance – when she has something in her mouth I need to take from her (she does have a tendency to pick up stuff!). When she does, I avoid a pee response simply by trading her for a treat, rather than just taking the object away (a better approach to retrieving an object from your dog anyway!). However, my husband and I no longer have to use any caution at all when greeting her – we can bend over, pat her on the head, hug her, and do all the other normal, stupid-primate things we humans like to do to our dogs. If Bonnie can do it, your dog can, too. 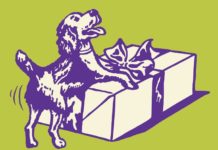 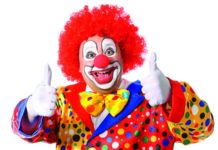 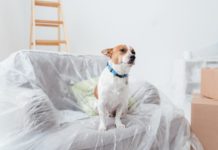 Moving with Dogs: Everything You Need to Know