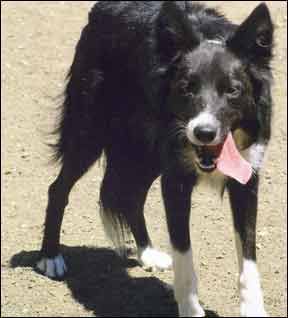 I’m awakened by the exhalation of my Border Collie’s warm breath on my face: heh-heh-heh. I slowly open one eye and focus on the nose just inches from my own. I may be anthropomorphizing, but I suspect he’s grinning. There it is again – a breathy heh-heh-heh. Wait a minute! Is he just panting or is he laughing at me?

Given the way dogs are designed, panting is a very normal bodily function. Dogs don’t have sweat glands throughout their body to expel heat like humans do. The only sweat glands they have are located on the pads of their paws. So what else can this canine body do to cool itself down? Pant.

Panting is the action of opening the mouth, sticking out the tongue, and rapidly, rhythmically breathing through the mouth. It’s a dog’s personal cooling system. This mode of quick breathing increases the air intake to the mucous membranes of the mouth and upper respiratory tract, causing evaporation, which in turn helps to reduce body temperature and cool the dog.

When resting, dogs take between 10 and 34 breaths a minute, depending on their size. Panting increases when the environment is warm and during and after exercise. Familiarize yourself with your dog’s everyday breathing and panting style so you’ll be aware of any changes in the pattern. There are times when this change can be cause for concern or require emergency care. Some of the reasons or situations when a dog’s panting may indicate he’s in trouble include:

It’s Too Hot!
Heatstroke can occur in any environment, but is more likely to happen during warm or hot weather, when your dog is becoming over extended during exercise, or if left in a closed car where temperatures can quickly become deadly. Heatstroke (hyperthermia) symptoms include excessive panting, deep red tongue and gums, glassy eyes, weakness, fast heart rate, drooling, seizures, nausea and/or vomiting, diarrhea, and a body temperature over 104˚ F. This is a medical emergency; a quick response can save his life.

Pugs and Bulldogs and Pekingese, oh my!
Brachycephalic breeds in particular are more prone to heatstroke and excessive panting due to their facial structure (and they may snore loudly!). This facial structure, comprised of a compressed upper jaw and a short muzzle with abnormally small nasal passages, a distorted larynx and narrow windpipe, makes it difficult for a brachycephalic dog to inhale sufficient amounts of air through his nose; he must often resort to open-mouth breathing.

Dogs with this type anatomy may tend to avoid strenuous exercise and can become short of breath following any mild exertion, excitement, or stress. They tend to be less tolerant of heat as they often can’t pant enough to regulate their body temperature and thus can require extra careful monitoring when exercising or in warm/hot environments.

Hide Pain I Will
As we know, dogs are Jedi masters at hiding pain. But panting can give them away. Be aware that panting is usually only one of a number of symptoms of pain; look for other signs such as restlessness, enlarged pupils, anxiety, reluctance to lie down, and licking or biting at a particular site.

Panting can also be a symptom of many diseases and chronic illnesses. The key is to note whether there is a change in your dog’s panting behavior and, if needed, take your dog to your veterinarian for diagnosis. Panting as a symptom is pervasive throughout a number of conditions; listed below are some of the more frequently seen ailments that could have associated panting.

Heart of the Matter
Cardiovascular problems such as cardiomyopathy, congestive heart failure, heart murmurs, heartworms, hypertension (high blood pressure, often a secondary issue caused by another disease), pulmonary thromboembolism (blockage of a vessel by material carried through the blood stream), and congenital heart abnormalities all list aberrant panting as a symptom. With these diseases, dogs can show some of the same symptoms that people do; so watch for these other symptoms, which include breathing difficulties, reduced exercise tolerance, lethargy, and coughing spells (sometimes worse at night).

As the Blood Flows
Atypical panting can also be an indictor of hematological problems that reduce the oxygen carrying capacity of the blood. This includes such ailments as hypercapnia, a condition caused by excess carbon dioxide in the blood (which is often secondary to kidney disease, diarrhea, shock, or diabetes mellitus), as well as with anemia and carbon monoxide poisoning.

It’s Hormonal
Diseases of the endocrine system often result in heavy unnatural panting. For example, hyperadrenocorticism (Cushing’s Disease) occurs when the dog’s adrenal glands produce too much cortisol. Other symptoms of this disease can include excessive hunger and thirst, hair loss, and a pot-bellied appearance. The associated panting can occur for a number of reasons: an enlarged liver can put pressure on the diaphragm and thereby limit the ability of the lungs to fully expand; the excessive cortisol stimulates panting; pulmonary thromboembolism is a complication not infrequently seen with Cushing’s and it can cause breathing irregularities. Other endocrine abnormalities resulting in panting include pheochromocytoma, a tumor of the adrenal gland that causes too much adrenalin to be produced, and hypothyroidism (deficiency of thyroid hormone). Conversely, the treatment of hypothyroidism – thyroxine supplementation – can also cause panting if excessively medicated.

Respiratory Problems
Panting is part of the respiratory system so it comes as no surprise that disorders in this system can lead to heavy breathing or panting. Your veterinarian may want to check for upper respiratory problems such as laryngeal paralysis or dysfunction, collapsing/collapsed trachea, nasal or throat growths, pneumonia, lung tumors, infections, or complications that can lead to blockage of the nasal passages.

It’s In the Nerves
The brain and neurological system are responsible for transmitting the necessary signals for bodily function, so any brain tumors or head trauma may affect the respiratory center.

Any conditions that cause dysfunction of the muscles of respiration may contribute to panting. These include myasthenia gravis (a neuromuscular disease caused by an inability of certain nerve receptors to function properly); nerve disorders associated with diabetes mellitus (in which the pancreas doesn’t produce enough insulin which is required for the body to efficiently process sugars, fats, and proteins); and laryngeal paralysis associated with hypothyroidism. Seizures and high body temperatures can stimulate the respiratory system and result in abnormal panting.

Dogs Have Feelings Too
Many behavioral and emotional issues have physical manifestations. Take fear, for example: dogs afraid of thunderstorms usually pant heavily, often walking with a crouch seeking places to hide. Dogs can also have panic attacks; these acute episodes of intense anxiety are frequently accompanied by severe panting, shaking, and trembling with a rapid heart and respiratory rate and dilated pupils.

Panting is often associated with cognitive dysfunction, the mental deterioration that sometimes occurs as dogs age. You may find that in addition to panting, other symptoms may include problems with recognizing familiar places or people; spatial disorientation; confusion; issues with the sleep/wake cycle; inappropriate or excessive vocalization; non-productive repetitive behaviors such as circling, pacing, and licking; signs of apathy; irritability; and a reduction in social interaction. Panting is also found to accompany dysphoria (general mood of depression, restlessness, and anxiety).

Female Trouble
Anecdotal accounts suggest that female dogs pant more than males, but with the following exceptions, there isn’t good evidence for this. Of course, during pregnancy, female dogs may pant more than usual as the uterus enlarges, and her blood volume and metabolic demands increase. Females will also pant while giving birth and may continue to do so for a few weeks after due to the contractions of the uterus that stimulate lactation (milk production). Panting can be associated with eclampsia, commonly known as milk fever, a low blood calcium level that can develop in the weeks after giving birth (usually due to an underactive thyroid gland).

It’s the Drugs, Man
Certain medications can produce panting as a side effect, including steroids such as prednisone, benzodiazepines (Diazepam/valium), opiods for pain management such as Fentanyl and Tramadol, and excess thyroxine supplementation (thyroid medication).

Miscellaneous Causes
At risk of sounding like even the kitchen sink can cause panting, we’ll lump the rest of the causes together. Obesity can lend itself to panting, as overweight dogs may have a tendency to overheat or the extra weight may put pressure on internal organs. Dogs may pant in order to get sufficient oxygen into their systems at high altitude. Allergies, irritation, and infection can all lead to increased panting and related wheezy noisy breathing. A body temperature of over 102.5˚ F. in dogs is usually considered to be a fever (normal being 100.5 to 102.5˚ F.); fever is an indication of infection and the raised internal body temperature can cause panting.

Cause for immediate concern is the consumption of toxic substances which can trigger heavy panting; be aware of what your dog may have ingested so that veterinary treatment can be sought if necessary. Advanced age is a factor; older dogs seem to pant more than younger dogs.

Bringing it all Back Home
Why does your dog pant? Be aware of the transient emotional triggers such as fear, stress, excitement, and anxiety. But if you are familiar with your dog’s exhalation style, and you notice a sudden or extreme change in the intensity and frequency of his panting, the panting is constant and intense, the tongue or/or gums appear blue or white, or you think your dog is in pain, see your veterinarian immediately.

Heh-Heh-Heh . . .
No, It Isn’t All Anthropomorphism
Sometimes dogs just pant. It could be idiopathic. Or maybe they are laughing.

Simonet found that these specific panting sounds have a broader range of frequencies than the regular pant. Her playback experiments in 2005 found that recordings of these vocalizations, deemed dog laughter, would reduce stress related behavior in shelter dogs, such as barking, lunging, cage-biting, tail chasing, and cowering; it also appeared to have a calming effect with an increase in pro-social behaviors.

Like many of us who want to communicate better with our dogs, Simonet tried imitating the sound herself and found it to have a positive effect on dogs hearing it. If you want to try to imitate the sound, try a breathy exhalation with no actual voicing. Try different approaches to see if your dog will respond.

I’m pretty sure my Border Collie was laughing at me while I slept. It was a breathy exhalation, a quick burst of panting. While your dogs may not laugh with you, they may laugh at you. Either way, laughter can induce and is a sign of joy. So go laugh with your dog.

Author Barbara Dobbins is a dog trainer on hiatus. Her previous article in WDJ was “Chemo Can Be Kind,” in the October issue.