It is well known in the dog world that our canine companions are primarily body language communicators, i.e., visual learners. This makes sense; they communicate with each other primarily through body language, including posture, facial expressions, and movement. When we start training them, they learn hand-signal cues and body prompts quite easily, but usually, we have to put extra effort into getting our dogs to respond reliably to our verbal cues.

This explains why dogs sometimes don’t respond to a verbal cue even though the cue-giver is confident that their dog “knows” it. All too often the person giving the cue fails to realize that, usually, they accompany their verbal cues with one or more subtle body cues (such as a slight movement of their shoulders, a downward glance, or a tilt of the head), that their dog depends on to understand and respond to the cue.

Our training programs here at Peaceable Paws emphasize the use of verbal cues; we start with verbal cues in our basic training classes and add hand signals in our more advanced classes.

If dogs are such great body language communicators, why do we start with verbal cues? Because we humans are a verbal species and our dogs have to live in our world! Our clients want to be able to talk to their dogs and have their dogs respond.

Also, if we begin with the more challenging piece, neither dog nor human become reliant on the easy hand signals. They learn the verbal cues first – and the hand signals, when we get to them, are a breeze. The humans are happy that they can communicate verbally with their dogs and delighted by how quickly their dogs learn the body language cues when we add them.

Additionally, there are times when we need to cue our dogs when they can’t see us. They may be too far away, it might be dark, they might be in another room, or looking elsewhere. Voice cues may be able to reach them when hand signals cannot.

HOW TO TEACH A VERBAL CUE

Here’s how we get new behaviors on verbal cue, using “Down” for our example:

1. Without yet using any verbal cue, lure your dog into a down position from a sit. Put the treat in front of her nose and move the treat  slowly toward the ground.

When her elbows touch the ground – when she’s fully in the down position – mark the moment with the “click!” of a clicker or a verbal marker, such as the word “Yes!” and feed her a treat. You may need to mark and treat several times on the way down, until your dog figures out what you are asking of her.

2. When your dog easily follows the lure into a down position, add the verbal cue. With your treat out of sight (put your hands behind your back), say “Down” clearly and happily, just one time. Pause briefly, then lure your dog into the down. When her elbows touch the ground, mark the behavior (click or “yes!”) and give her a treat. Repeat 6 to 7 times.

3. Now, say “Down” as in Step 2, but vary the amount of time you pause before using the lure. This gives her time to process what you are asking of her and time to offer a response.

If you see her look at the ground, or make a slight movement, it’s as if she’s asking, “Is this right?” If she does this tell her, “Good girl!” and quickly lure her the rest of the way – then mark the correct behavior and give her a treat.

4. Some dogs will begin offering the “Down” behavior on your verbal cue during Step 3. This is a nice shortcut – mark and treat and keep practicing. (Just because she does it once doesn’t mean she completely understands and gets it; you still need to practice to make it a solid, reliable response.)

5. Most dogs need some additional steps before they begin offering the “Down” on verbal cue alone. Continue to fade the lure as in Step 3. As you move the treat to the floor, watch her closely. When she appears to be committed to lying down, whisk the treat quickly away and hide it behind your back. If she finishes the “Down,” mark and treat.

If she doesn’t finish, bring the treat back out and lure her the rest of the way, marking (click or “yes!”) when her elbows hit the ground and giving her a treat.

Next time, lure her a little farther toward the floor before whisking the treat away. Continue to vary the amount of time you wait after giving the verbal cue before luring.

6. Gradually whisk the treat away sooner and sooner, until you are barely or not using the lure at all. Notice that I don’t suggest doing any intermediate hand signals or body prompts in this process, like pointing at the ground – or worse, using “air cookies” (holding my empty hand in such as way to appear that I have a treat). If you use any kind of gesture, your dog still hasn’t learned the verbal cue, and you still have to go through the process of fading the hand signal or prompt.

7. At some point, your dog will begin to lie down when she hears the verbal cue, without a lure. Congratulations! Now, start helping her to generalize this cue and behavior to other locations; practice in a variety of environments, starting in low-distraction places and gradually building up to more distracting ones.

The procedure works the same way for any other behaviors you want to “put on verbal cue.” Use your lure to show your dog what you want her to do. As soon as she will lure easily into position, introduce a clear verbal cue, and then start fading the lure, until she will do the behavior on just the verbal cue. Then generalize. 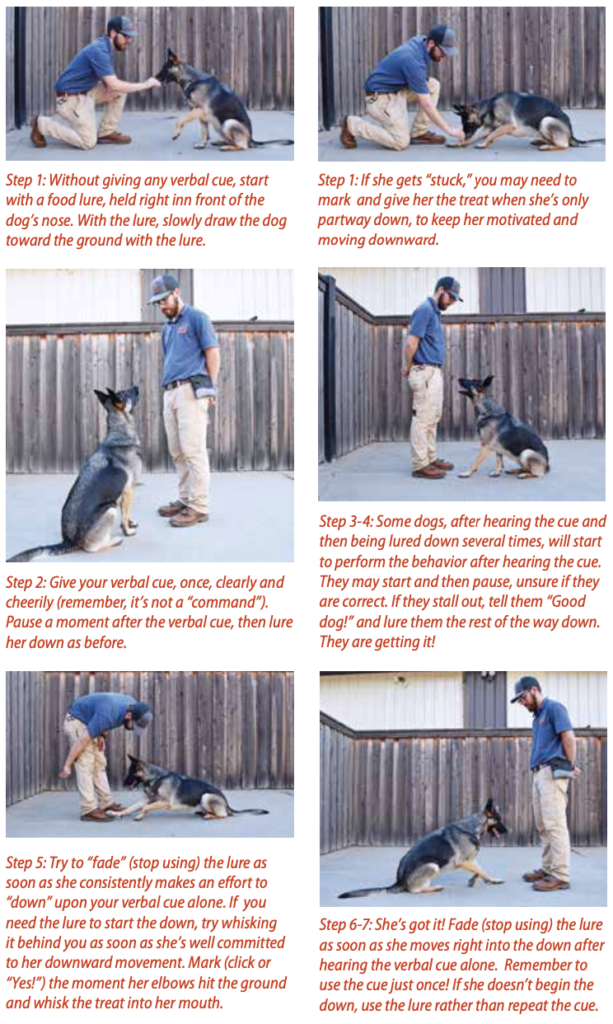 DO’S AND DON’TS OF VERBAL CUES

A few important things to keep in mind about verbal cues:

* A cue is not a “command.” Educated trainers no longer use the word “command” – which has a “Do it or else!” implication. Modern trainers use “cues” – and a cue is simply an opportunity for the dog to be reinforced for performing a behavior.

* Give cues in gentle, cheerful tones. Even the word “command” implies a loud, forceful, mean, commanding tone of voice.

* Say the cue one time, and if the dog doesn’t do the desired behavior, help him (with a lure or body prompt). He may not know the behavior as well as you thought, he may have been distracted, he may not have heard you. If you repeat the cue, “Sit. Sit! SIT!” (becoming more commanding with each repetition) then “Sit. Sit! SIT!” becomes the cue and your dog may learn to wait until he hears the third cue every time, before he performs the behavior.

* It will help your dog if everyone who interacts with him uses the same cues. While dogs can learn multiple cues for the same behavior, it’s easier for your dog if you keep it simple – one verbal cue for one behavior.

* That said, dogs cannot learn multiple behaviors for the same cue. Again, everyone needs to honor this caveat with your dog. If “Down!” is supposed to mean “lie down flat” then you need a different word that means “Get off the sofa” or “Don’t jump on me.” I use “Down” to mean “Lie down” and “Off” to mean “Get off of something.”

* Short, crisp cues generally work better than long, multi-syllabic words. Although dogs can learn longer words, the English “Sit” tends to work better than the French, “Asseyez-vous.” “Fetch” tends to work better than “Bring it here.” However, it is also true that once they have learned a cue very well, dogs are able to pick cues out of a sentence. When your dog is really reliable with his “Off” cue, you can say, “Please get off the sofa” and he will – and you can feel less stilted in your communications with him.

* Pronounce your cue the same way from one time to the next. If you normally give a short, crisp “Down” cue, but sometimes you use a more emphatic, drawn-out “Doowwnn,” there’s a good chance your dog might not understand you. Or, as in the “Sit. Sit! SIT!” example, it may end up that your dog recognizes only the “Doowwnn!”as the cue. Be consistent!

PUT THE TIME IN

It’s true that it takes a little longer to teach verbal cues than hand signals. But, all in all, it isn’t that difficult to do, and it’s completely worth the effort when you know you can communicate with your dog in your own native language.

Hand signals can be used to cue a limitless number and variety of behaviors, and they are especially handy (no pun intended) for those occasions when you don’t want to disrupt quiet time (the baby’s sleeping!), interrupt your phone conversation or Zoom meeting, and for communicating with hearing-impaired dogs.

There are two different philosophies regarding hand signals – and they both work. The first is that hand signals should be large and vigorous, so your dog can easily see them from far away. If you do distance work with your dog, these are, indeed, preferred. Large signals are commonly used in various canine competitions, as the handler doesn’t want to risk having her dog miss the signals. The second approach is to use small, subtle, hand signals so you can cue your dog unobtrusively in close quarters, in polite company, or in public.

The good news is that, because dogs can learn multiple cues for the same behavior, you can teach yours both the big signals for distance work, and the small signals for close-up work, if you want.

Still, we humans are a verbal species, and we want – and expect – our dogs to respond to our spoken cues. For that reason, in our Peaceable Paws training programs we emphasize teaching verbal cues, then add the relatively easy hand signals after the dog knows the verbal cue.