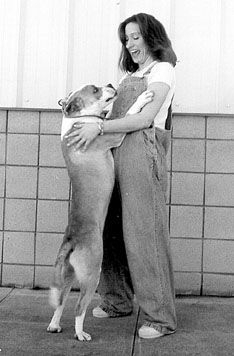 I have a 1 1/2 year old Labrador Retriever. She is very smart – and very stubborn! My husband and I have been to puppy school, obedience school and we have also worked with a personal trainer. She does the “normal” puppy things – jumping up when I come home from work and when people come to visit, etc. But one of the reasons we went to the trainer was because she seemed to be exhibiting some aggressive tendencies.

When I come home from work I always play with her. We also fenced our yard so that she could run and play freely. However, when I sit down she barks and nips at me. A few times she got really into it and jumped up as she was nipping. She is very strong and I was getting bruised where she would catch me with her mouth. She never broke the skin and I was confident that she would never hurt me, but I was afraid that if she did this to someone else they might get hurt or scared.

The training school we went to told us to walk away when she did this. The problem was that she would follow and keep nipping or just start up again when I returned. Saying “ouch!” in a high-pitched voice was also suggested and did not work. I didn’t know what to do and as she got bigger and stronger – the bruises got worse. So we contacted a personal trainer. I told him it really just happened when I sat down on the couch. If I got up to do dishes or something she would often just rest on the floor near me, but once I sat down, she started in. He suggested a Tri-Tronics collar. Now of course I was not thrilled with this idea, but since nothing else worked I tried it.

The collar worked. I did test it on myself to make sure I wasn’t putting her through a lot of pain – which I wasn’t – but I still don’t like it. She still occasionally gets into these moods and the only way I can stop her is to put the collar on. I rarely need to shock her anymore because she is “collar-wise” and knows when it is on.

Do you have any idea how I can get her to stop these nipping fits once she gets going so that I don’t have to use the collar?

We asked our Training Editor, Pat Miller, to handle this question. Miller, a member of the Association of Pet Dog Trainers, offers private and group dog training classes from her base in Chattanooga, Tennessee.

I appreciate your resistance to using the shock collar for basic training. Yes, shocking your dog can work, to a point. As you say in your letter, Guiness has become collar-wise and knows when it is on. So you really haven’t trained her not to nip; you’ve only taught her that if she nips when the collar is on, she will get hurt. Don’t kid yourself, by the way, if the collar didn’t hurt her, it wouldn’t stop the behavior.

The question is, do you want a relationship with your dog that requires the threat of pain and shock to keep her well-behaved? Obviously not, since you wrote this letter.

The school you went to gave you good advice, as far as it went. The way to make a behavior go away is to prevent the dog from being rewarded by it. Walking away from a dog who does this often works – except when the dog just follows you and continues the inappropriate behavior. When that happens, a tether can be a good solution.

Too bad, time out!
You will need a six-foot nylon-coated cable with snaps at both ends. Snap one end to an eye-bolt screwed into a wall, or loop it around the leg of a heavy piece of furniture. Put a soft dog bed at the tether location, with lots of enticing chew toys, and have a stuffed Kong handy on a nearby shelf . Hook up the tether in the same room as you, but far enough away from your chair that Guiness won’t be able to reach you. Sit in your chair. If she starts to bark at you, say “Oops, time out!” in a cheerful voice, walk her over to her tether, hook her up, and give her the Kong. Go back to your reading. Now if she barks, just ignore her.

Sooner or later she will pause in her barking, if just to catch her breath. When she does, Click! a clicker or say “Yes!” and toss her a treat. Keep rewarding her for pauses in the barking, and gradually wait for increasingly longer periods of quiet before clicking and treating. As the periods of quiet get longer, start rewarding random periods of quiet – sometimes shorter, sometimes longer – so she can’t anticipate when the next reward is due.

When you can see that her arousal level has diminished – when she is lying calmly on her bed on the tether – walk over to her and quietly release her from the cable. This part is important. She needs to know not only that barking and nipping earns her a time out, but also, that calm behavior wins your attention and her freedom. If she cranks up and starts barking and nipping again, do another “Oops, time out!” and tether her again. If she stays calm while off the tether, remember to occasionally give her attention and praise for being calm and quiet.

Remember that dogs learn through repetition. You want Guiness to learn that “not barking” gets your attention. Once she figures that out, she will “not bark” as hard as she can to get you to look at, talk to, touch, or play with her.

The tether does several things. It controls her inappropriate behavior so you don’t have to keep interacting with – and inadvertently rewarding – her for it. It allows you to repeatedly ignore her for the unwanted behavior and reward her for the acceptable behavior. It teaches her to control her own behavior, rather than relying on physical punishment or the threat of punishment that can damage your relationship with her. And it allows you to do it all without pain or anger on your part, which helps maintain a relationship of mutual trust and respect between you and your dog.

Stubbornness is not a dog trait
I do want to take issue with the description of Guiness or any other dog as “stubborn.” The term “stubborn” is pejorative, and implies a malicious intent that I don’t believe dogs are capable of. I prefer to describe them as persistent – a quality that we are likely to admire. Dogs simply do what works. Guiness has figured out that when you are up and doing dishes you are too busy to pay attention to her, but when you are sitting down your time is hers. When you try to read, she barks and nips at you to remind you that now you are supposed to be paying attention to her, not reading. Because you do respond to her when she barks, or at least did respond at some time in the past, she learned that barking and nipping works.

When we ignore a behavior that has worked in the past, dogs commonly display an “extinction burst” – that is, a very strong exhibition of the behavior that has worked in the past. They try really hard to get the previously successful behavior to work again. By putting her on a tether, you put yourself out of harm’s way, which allows you to ignore the extinction burst without getting irritated by it, and reward the first glimmerings of the desired behavior – in this case, calm and quiet.