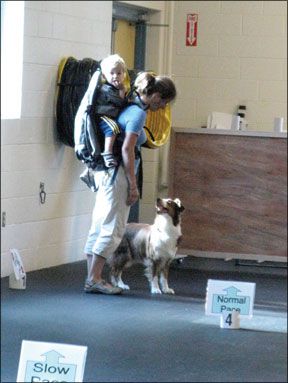 Forward! The judge cues the team to begin. The handler cues her dog to “heel” and, with her left arm bent in at her waist, briskly moves forward with her dog on her left side, heading toward the first in a series of signs that prompt her to cue one of a variety of behaviors. As she completes an “about turn,” a particularly challenging behavior for her long-bodied dog, she smiles, praises him, and moves on to the next sign, attempting to keep up a steady pace around the course of 20 signs. Wait! Did we hear her praise her dog in the ring? Horrors! Surely, the judge made note of that! He’s scribbling furiously now!

The handler moves toward another sign and executes the “halt / sit / down / walk around” maneuver. As she releases her dog, she praises him again and even sneaks in a quick pat on the head. She can’t be serious! The judge must be grinding that pencil to a nub now! Does this handler not know that talking or touching your dog in the ring is not allowed? Ah, but therein lies the unique nature of “rally obedience.” It’s not just the signs and the greater variety of behaviors involved; it’s the philosophy of this sport that makes it distinct from its cousin, traditional competition obedience. Rally obedience was envisioned as a sport that would promote the human-canine bond by allowing more natural communication in both training and competition than historically had been available in traditional obedience. The game This is a sport that takes a variety of useful real-life behaviors and strings them together into a “course” you take with your dog, guided by signs that call out behaviors in both text and graphics. Depending upon the level of competition and venue, there are anywhere between 18 and 22 signs. In addition to common behaviors such as sit, down, stay, come, and leash walking (heel), here are just a few of the behaviors required: •Halt / sit / stand •Halt / sit / down / walk around •Halt / leave dog / recall over jump •Halt / leave dog / send over jump •270-degree turn, right •270-degree turn, left •Call front / finish right •Call front / finish left •Moving side step •Moving back up / heel back three steps / then forward •Moving stand / leave dog •Serpentine weave (heeling around cones) These are just some of the variety of behaviors that may be strung together in rally as your dog heels next to you around the course. There are many more, depending upon the venue and the level of competition. The dog’s rapt attention to the handler and his quick and correct response to cues are critical to smooth completion of each course. There are time limits to complete each course, and your speed in completing the course can mean the difference between placements (e.g., 1st through 4th). Each course is “designed” by the judge and, as a result, can vary widely from competition to competition. This is in contrast to traditional competition obedience where the heeling patterns are very similar, the judge simply calling out variations of “right turn,” “left turn,” “about turn,” “fast,” “slow,” and “halt.” In traditional obedience, the judge follows the team very closely, while rally judges give the teams more room to perform the behaviors. This can be helpful for dogs who might be fearful or stressed with strangers lurking nearby. Many of the behaviors are useful behaviors to train for real-life use. As Pam Dennison, author of Click Your Way to Rally Obedience, says in her book, “Passing other dogs or people on the road or trail, getting around a show site, even taking your dog to a flea market will all be easier, more enjoyable, and safer if your dog knows the rally moves outlined in this book.” Originally a self-confessed traditional competition obedience “snob,” Dennison first attended a rally seminar only to see if it might be something she could offer her students as an alternative to traditional obedience. She was hooked. She teaches it to her students and has competed with her own dogs in events offered by two organizations – the Association of Pet Dog Trainers (APDT) and American Kennel Club (AKC). Dennison’s book is a good resource, detailing the differences between APDT and AKC rally and providing lengthy instructions about how to train rally behaviors. This includes how to use the clicker in training and how to “proof” your training using positive reinforcement instead of punishment. (See sidebar, below, for additional books and DVDs.) Ann Ford of Hagerstown, Maryland, had also competed in AKC obedience before discovering rally. In 2004, she attended a rally seminar presented by Dennison. She was curious about this new sport because her Border Collie, Jenny, did not seem to enjoy traditional obedience. Jenny was a challenge because she was very easily stimulated by the environment, which made training very difficult. “Because I can interact with my dog throughout an APDT rally course, by verbally praising her and giving her food rewards (and also a pat on the head!), Jenny learned that working with me can be a whole lot of fun for both of us. She would pull and tug on her lead in the traditional obedience ring and we were both miserable, but in rally, she enjoys all of the exercises and happily dances next to me in beautiful heel position. I never thought I would ever be able to do any type of venue with her off-lead until we started rally, so I have a happy dog and I am a happy handler!

“That’s the most important part to me – that my dog is happy working with me. Rally has given that to us, for which I am so very grateful! Ribbons, placements, and titles are all icing on the cake. Rally has also benefited our overall relationship and communication. It has also very much enhanced our training for canine musical freestyle dancing, as many of the moves we use are rally exercises.” History Rally was conceived in 2000 by Charles “Bud” Kramer, a long-time obedience and agility aficionado. Kramer saw interest in competition obedience wane as agility’s popularity grew. He envisioned a fun, attractive alternative to traditional obedience. The AKC took his proposal under review in 2000 and launched its program in 2005. Meanwhile, the APDT launched its rally program in 2001 (see “A Brief History of a Rally Cool Sport,” below). The United Kennel Club (UKC) and Canine Work and Games (C-Wag) both started rally programs in the past couple of years. We’ll describe some of the differences between APDT and AKC rally; UKC and C-Wag each have their own nuances, as well. Attributes of a rally team Rally obedience is a fun, upbeat sport, but does not favor dogs with any particular physical structure or temperament. Actually, it is the handler’s approach to the sport that is the most important contributor to successful training and competition. Obedience training requires precision behaviors and focused attention and these can be a challenge for many dogs. Thus, the handler who is committed to making training fun and truly enjoys training as a conduit to better communication between the species will be most successful. Although some handlers see rally as merely a stepping stone to “real” competition obedience, handlers who embrace rally as it was originally envisioned will get the most out of the sport. If you have previously thought that competition obedience is not your cup of tea, you might want to consider this version. Rally competitor Ann Ford shares her view of the sport: “Rally folks – especially APDT rally folks – are a bit different from the traditional obedience people, in that rally is a very bonded group of exhibitors. Everyone supports and encourages one another so very much. We have gained some very dear, lifelong friends thanks to rally trialing, laughed at our mistakes together, cried with our wondrous victories together, encouraged those who didn’t have a good day to try again another time, critiqued each other’s runs with loving respect, and took the “newbies” under our wings in making them feel welcome and less nervous at their first trials. “I have noticed that folks who gravitate to rally are those who have or are working to improve their relationship with their dog, to engage in a sport in which all dogs can participate and enjoy. APDT is open to all dogs (mixed breeds too!) as well as handlers with special physical restrictions and needs, so it’s a win-win situation! “Retired agility dogs seem to excel in rally (especially with distance work), as do traditional obedience dogs, who also enjoy the more relaxed interaction with their handlers. Puppies can get great obedience and trial experience in their early training, and older dogs who cannot physically perform actively like they used to can take advantage of APDT rally’s willingness to modify some of the exercises so they can still participate.” Equipment and supplies The sport does not require a lot of gear. •Rewards – Both toys and treats are used. As Pam Dennison stresses in Click Your Way to Rally Obedience, a variety of reinforcers are important in rally training. Using food alone limits handlers, especially with small dogs who can only eat so much! Reinforcing with toys can be a great stress reliever as well. •Signs – Trainers who teach rally classes will have the rally signs. You can also purchase your own. •Jump/hurdle – A single jump, similar to those used in agility training, is used. Other kinds, such as a broad jump or a panel jump, might also be used in AKC.