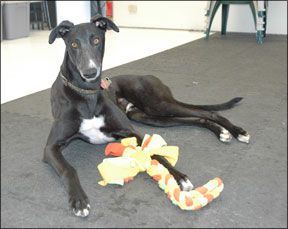 Dogs are one of the rare species of animals who play throughout their lifetimes; perhaps it’s one of the reasons we have such strong bonds with dogs, because we too play as grown ups.

Humans and canines appear to be what scientists call “neotenous”: as adults, we retain many of the behavioral traits of juveniles. In most species, play is for the young. Think about it: calves and lambs frisk about and chase each other; but how often do you see adult cows and sheep playing with one another?! Dogs and humans, though, maintain high levels of play even into adulthood.

We are also obsessed with toys, or “object play” in scientific terminology. This is very rare in animals, and I think it’s another reason why we are so bonded to dogs. (Look at how much we love balls! There is more time devoted to baseballs, footballs, tennis balls, basketballs, golf balls, and soccer balls on the evening news than there is to world peace, hunger, politics, and our local government . . . Just listing the different “object” related sports could take up a paragraph. We are truly obsessed with balls – we must be Labradors at heart!)

Of course, there are dogs who don’t exhibit an interest in balls, and I empathize with them. I was one of those kids who wasn’t very sports-minded. When I was forced to play softball in elementary school I used to stand in right field repeating “Please don’t hit the ball to me, please don’t hit the ball to me!” But overall, people (and dogs) like me are the exception and there are an awful lot of people and dogs who are crazy about balls.

So, given that play is something both people and dogs love, surely we should use it frequently as a reinforcement in training. Even though I love food, both personally (!) and for training, I think play is often underutilized as reinforcement. I have seen play be even more successful than food in some cases, and play is such fun for both species that sometimes I think it reinforces both species at the same time. That encourages people to do more training, and what a good thing that is! I’m not alone; many other trainers in search and rescue, scent detection, and bomb detection use play as a reinforcement because it is so highly motivating.

I’ve found play to be helpful in some cases with serious behavior problems, with, for example, dogs who are aggressive with other dogs. If you have a dog-aggressive dog who loves to play, one of the best reinforcements you can use for appropriate behavior around other dogs is play: tug of war or chase the ball, for example. Often, the magic of classical conditioning takes place, and ultimately the dog associates the sight of other dogs with the light-hearted emotions associated with play.

However, it’s not just professional dog trainers working with serious behavior problems who should use more play in their training: Play can be a cornerstone of positive-based family dog training. Do you want to teach your dog to not run to the door and jump on a visitor? If he likes toys, teach him to go get a toy when he hears the doorbell. Encourage him to bring it out and show it to everybody. Want your dog to drop something on cue? Teach him “Take it” and “Drop it” when you play tug games.

In addition, trick training is a wonderful way to incorporate a playful demeanor into your dog’s life. We all like to show off our dogs’ tricks, and we don’t seem to take it personally when dogs don’t perform up to our expectations like we do with standard “obedience” signals. Think about it: When we teach our dog tricks, we tend to have a cheerful and fun-loving attitude, but often when we’re training something like lie down, we get stern and serious. “DOWN!” we often say with a low, commanding voice, and if our dog disobeys it is tempting to take it personally.

But when we are training a dog to jump through a hoop, it’s more like, “Jump through the hoop, jump through the hoop! Yay! What a good boy! Aren’t you cute?!” Even if our dog doesn’t do it right, we say “Oh well, it’s just a trick!” Of course, we do need to train our dogs to do some things first time, every time, but it’s much more successful if we make it fun for both the teacher and the student!

It’s easy to do: Make asking a dog to sit the most fun game in the world. “Sit! Yay! GOOD DOG! Here, have a tennis ball!” Intersperse “sit” and “down” with tricks – jump through the hoop or “Aren’t you ashamed of yourself?” (This is one of my favorite tricks. You say “Aren’t you ashamed?” and your dog hides his head under a pillow!) Work on sit and then play tug. Ask for a down, and then throw a toy. You’ll end up with a dog who listens better, instead of tuning in only after the third time he hears the cue: “Sit! Sit! Sit!”

A word of warning for a potential pitfall: Don’t confuse your fun with the dog’s fun. In other words, what is enjoyable for you may not be enjoyable to the dog. All dogs are different; they enjoy different things, so you can’t assume that if it’s fun for you, or another one of your dogs, it’s equally fun for every dog.

For example, most dogs love to be petted, but not in every context and not in all ways. Most people like petting their dogs, but some don’t notice that their dogs don’t like being pat-patted on top of the head as reinforcement for coming when called.

Observe your dog carefully; if he backs away from you when you reach to pet him, pay attention! He’s telling you he doesn’t want to be petted – and that if you persist, you are actually punishing the behavior you meant to reward! I’ve seen this scenario repeated literally hundreds (thousands?) of times, when a person calls their dog away from something really tempting – say, for example, another dog who is getting food. The dog leaves a handful of liver, comes back to his owner . . . and the owner happily and enthusiastically pats the dog on the head. The person feels so good and is so happy – “Good dog!” And the dog turns his head away and hates it!

If a dog turns and walks away, that’s invaluable information: he doesn’t like what you did. Even if he just closes his mouth and/or turns his face away, pay attention. That could be your dog telling you, “Um, I really don’t like this.”

Get in the habit of carefully observing your dog’s response to your rewards, but also observe his response to training overall. Does he quickly engage with you any time you initiate a training session? Or does he dodge your gaze and wander off when he hears you call, or sees you gathering your training equipment? If he responds with the latter, you need to rethink your sessions.

Are you training too many times a day? Are your sessions too long? If your dog’s response is anything less than highly enthusiastic, do whatever it takes to make the sessions more enjoyable. If you are training a lot, try reducing your sessions in number and/or length. (In my experience, some motivated trainers tend to overdo it. Try one schedule for three days; then try another schedule for three days. See how the dog does with each.)

Novice trainers more often tend to give up too fast, sometimes before the dog has had a chance to figure out what was expected. Most importantly, ask yourself if you and your dog are having a good time, and if both of you are learning something in the process.

There’s so much to talk about on the topic of training, and using play as a part of that – I could go on and on. However, I’d much rather you finished this article, and then go out and play some more with your dog. Let the games begin!