I’ve always talked to dogs – as I’m sure you do – engaging them with the usual cues, the names of favorite things and people, and a healthy dose of general chatter. But thanks to a week-long course in canine applied ethology taught by Kim Brophey, CDBC, CPDT-KA, of The Dog Door Behavior Center in Asheville, North Carolina, I’m now making a point to verbally name things in a way that gives the dogs I’m working with a clue about what’s next. The result? A notable decrease in anxiety, skittishness, and reactivity, plus an overall smoothing of household activity.

I know it sounds too simple, but I promise it’s a game-changer: Talk more to your dog!

THE MR. ROGERS HACK FOR TALKING TO YOUR DOG

“Dogs have the receptive language ability of a toddler.” When I heard Brophey say this in her course, and then go into the science supporting the statement, a lightbulb went on for me. I taught preschool before I pivoted to dogs, and I can tell you that, while most toddlers can’t articulate their thoughts very well, they understand an astounding percentage of what people say to them.

Note that we make an effort to tell toddlers what’s going on around them. That helps them gain confidence as they begin to see patterns in an otherwise confusing world. Think about the “Mister Rogers’ Neighborhood” show on PBS and that dear man’s predictably reassuring commentary on his actions (“I’m going to go over to the tank and feed the fish now.”).

Guess what? That purposeful narration works for dogs too, and Brophey calls it the “Mr. Rogers Hack.” She drives home the idea that so much of our human environment is utterly foreign to dogs, so they’re constantly having to work hard figuring out what the heck is going on. “Should I be worried? Should I be excited? Will I be interacting with that? Will it be loud? Can I eat it?” Cue the dog’s anxiety, skittishness, arousal, reactivity.

We can lessen a dog’s load by explaining life as it unfolds, just as Mr. Rogers did.

This does not mean that we should all begin prattering on to our dogs about, say, global politics. The key is that the oft-repeated words and phrases must be relevant for the dog. When focused on things the dog has feelings about – either negative or positive – the Mr. Rogers Hack gives the dog a clue about what’s coming next, helping him to prepare.

For example, the other day I was walking my three big dogs and we turned a corner to find a construction crew working on the street. There were a handful of men, wearing reflective gear and hard hats, holding big tools, next to a noisy truck.

If I did nothing in that scenario I’d have a three-dog challenge on my hands: one barker, one slinker, and a highly suggestable 100-lb adolescent. Historically, my approach would have been to 1) switch direction or 2) use cues like “touch,” “look,” and “find it” to pull the dogs’ attention away from the crew and onto something familiar and reassuring as we pass by as quickly as we can. With three of them, though, that’s not always a graceful moment.

So I used the Mr. Rogers Hack, as I’ve been doing for the past few months. I exclaimed in a cheery voice, “Oh great, they’re fixing it!” My dogs relaxed – no stream of cues or distraction necessary. They were able to casually watch as we loose-leashed our way past the equipment and workers.

Why did this work? Because I have been consistently using that phrase – “Oh great, they’re fixing it!” – when there are unexpected humans working in unusual places doing strange loud things in weird clothing, and (here’s the key) none of that has affected them in any way.

“They’re fixing it!” allows my dogs’ brains to stop working so hard to figure out every single road/lawn/tree/paint/gutter/gardening/construction crew we come across. Those words help my dogs to categorize this experience because it’s part of a pattern they can recognize. They can now predict what’s next: We’ll continue our walk and that crew won’t impact us at all.

What is Applied Ethology?

Ethology  is simply the study of animal behavior; applied ethology focuses on the behavior of animals in the care of humans. Applied ethology allows a zookeeper to, say, find ways to help a captive cheetah stop pacing unhappily in his enclosure. (“What needs are unmet? How can we change the environment to fix that?”)

In her book, her courses, and her work at The Dog Door, Kim Brophey brings that applied ethology approach to our pet dogs, who are – even though we don’t like to think about it this way – in captivity. When it comes to undesired behavior – barking, digging, reactivity – dog trainers usually jump into changing that behavior. In contrast, Brophey’s model calls for slowing down that jump and instead spending time on “Why are they doing that behavior.”

If it sounds like that would lead to frustrated dog owners waiting for a solution, think again. Brophey’s process often results in the owner gaining not only a new understanding of the dog’s behavior but also many deceptively simple “hacks” (like the Mr. Rogers one profiled here) that can have a profound impact on the dog/owner relationship.

To learn more, check out “The Dog’s Truth,” Brophey’s engaging one-hour course on canine applied ethology; see the link on her website at familydogmediation.com.

SAMPLE VOCABULARY TO USE TO TALK TO YOUR DOG

It may be exhausting or arousing for a dog to have to evaluate every novel thing in our human environment and wonder how it might affect him. Using a word to indicate a category of things that will just pass on by is incredibly helpful, relaxing information for him. For example:

“Plane” = Anything loud in the sky

“Boat” = Anything floating in the water

“Bike” = A human moving fast on a bike, scooter, or skateboard

“Neighbor” = A random person we see out walking

“They’re playing” = Kids or teens racing around or being loud

“Doggy” = A dog we see but won’t greet up close

In contrast, here are words that can help a dog anticipate more interaction:

“Guest” = People coming into the house (this will telegraph that people will come in, sit around and talk)

“Helper” = A plumber, electrician, painter, or anybody coming into the house to work (may telegraph that person will be hanging out for a while, perhaps unsupervised by family, using tools, making noise)

It can be helpful (and just plain fun) to teach your dog things that come up every day, like:

“TV time!” = Snuggle in because we’ll be here for a while

“First” and “Next” = For multiple-dog families training, putting harnesses on, getting in the car, being brushed, etc.

This deceptively simple shift in how we talk to our dogs is a great gift we can give them. Intentional, consistent, predictive narration creates calmer dogs – and thus, happier humans. 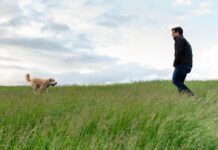 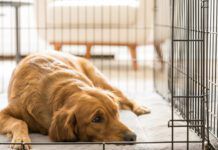 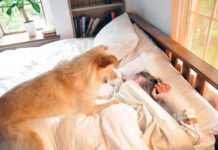 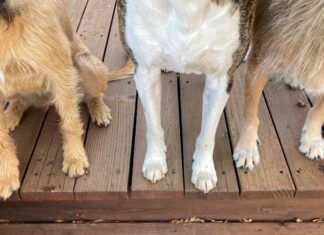