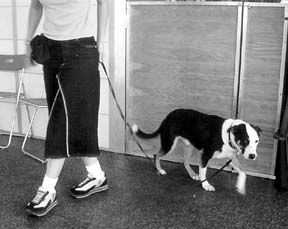 When Maggie, a young Australian Cattle Dog-mix, first walked into our agility training yard, she was obviously scared. As I crouched near her, hand outstretched with a treat, she slunk away. When another dog moved on the opposite side of the yard, she jumped. When her handler led her gently past a tunnel, she tried to escape and run away. When a truck drove by on the street nearby, she cowered.

Maggie was, quite literally, afraid of everyone and everything. I’m sure that if the sun had been out that day, she would have been afraid of her own shadow.

Yet this morning, less than a year later, Maggie confidently marched into the same training yard. She approached another dog, tail wagging. She excitedly ran up to each person in the class (including a couple of people she did not know) asking for attention and treats. Then, at her handler’s direction, Maggie leaped through the tire jump, raced over the A-frame, ran through the tunnel, jumped three jumps, pushed through the chute, and banged down the teeter. And she did all of this while cars and trucks noisily passed on a nearby street.

How did Maggie overcome her fears and learn to confidently approach strangers, interact with other dogs, and charge through an agility course all the while tuning out loud rumbling trucks? The key was a powerful learning experience called classical conditioning.

Positive associations
Classical conditioning, quite simply, is learning by association. It is when a person or animal associates one stimulus with something that was not previously associated. For example, if you ran an electric can opener in front of a dog who had never eaten anything out of a can before, he may not respond to the sound in any way. But if you begin feeding the same dog canned food, he’ll soon learn to associate the sound of the electric opener with the advent of his dinner, and begin to display great excitement whenever the electric can opener runs.

Classical conditioning happens everywhere, all the time, with or without our help or knowledge. Most of us have dogs that get excited when they hear the jingle of keys. A set of keys, by itself, has no special meaning for dogs. But when those keys are linked with walks or car rides, they can trigger as much excitement as the walks or car rides themselves.

Shifting emotions
Classical conditioning differs from other types of training; in fact, it’s not training, per se, although it can play an important role in the training process. The goal of training is to get the dog to exhibit certain behaviors – or cease to exhibit certain undesired behaviors – on cue. For example, you want the dog to sit when you use a verbal cue, or you want to teach the dog not to jump up on you. Most training is accomplished through the use of operant conditioning, the use of rewards and/or punishment to encourage or discourage the dog from displaying certain behaviors. Praise, petting, or feeding a dog treats when he is sitting increases the likelihood of his sitting behavior; punishment such as ignoring the dog and turning your back on him will decrease his jumping behavior.

To use Maggie as an example, we used classical conditioning to help her relax and enjoy being in the training yard. The process was simple: her handler showered her with great treats each time she came into the training yard. Within a few weeks, Maggie’s fears started to subside; strange people, new dogs, spooky obstacles, and noisy trucks no longer triggered a fear response – these things now meant treats! She quickly began relaxing while in the agility yard and anticipating the treats she would receive there. Soon, we were able to start teaching her agility.

As I said, even though classical conditioning does not train a dog to perform behaviors on cue, it can play a powerful role in a behavior modification program.

Conditioning training tools
One of the most common ways to use classical conditioning in a positive training program is in the initial steps of clicker training. The clicker, at first, has no special meaning to the dog. But as soon as the Click! of the clicker is repeatedly paired with great treats – also known as “charging” the clicker – it becomes a powerful tool in training. The “charged” clicker elicits the same emotional response in the dog as the treat itself.

Classical conditioning can also be used to help dogs learn to accept training tools that they don’t like at first, such as head halters, muzzles, or crates. Take head halters as an example. Many dogs will, without conditioning, resist or even actively dislike wearing a halter. But through associating pleasant things with the halter, most dogs can actually learn to love wearing one. At first, you might give your dog treats when you take out the halter. Next, you give your dog treats, praise, and other enjoyable attention while you hold the halter near the dog, and eventually, you lavish this enjoyable treatment on the dog while he wears the halter. Once the dog can wear the halter without any signs of distress, you can reinforce the conditioning by always having the halter signal the start of fun activities: walks, ball play, training, and other adventures.

Becoming a social animal
Behaviorist and author Jean Donaldson, who directs the behavior and training department at the San Francisco SPCA, calls the use of classical conditioning in conjunction with early socialization “a puppy insurance policy.” Each time you pair the presence of children with treats, for example, you are paying into an insurance policy that will protect you and your dog from behavior problems around children later in life. The more you put into the insurance policy, the bigger your protection! Here’s how it works:

By introducing a puppy or young dog to kids of all different ages, he will be more likely to accept kids. When you provide classical conditioning through feeding treats in the presence of children, the dog will not only learn to accept kids, but also will learn that when he is around kids, good things happen. If you also have the children actually feed your puppy treats or play his favorite game, he will learn that children not only equal good things, but also are the source of good things!

If you incorporate classical conditioning in all of your socialization efforts, you are more likely to have a dog who not only likes the things he’s already encountered, but may also learn to simply enjoy new experiences.

For example, a dog that is afraid of umbrellas may be afraid because she hasn’t seen many umbrellas, because an umbrella bopped her on the head when she was a pup, or maybe because a person carrying an umbrella looks like a big, bad monster. You may not know what caused the fear, and truthfully, you don’t need to know in order to help your dog overcome her fear of umbrellas. (See “Putting Classical Conditioning to Work,” below, for step-by-step instructions for using classical conditioning to dispel your dog’s fears.)

I became intrigued with classical conditioning because of my own dog’s problems. Jesse has displayed fear-based dog-to-dog aggression on numerous occasions. I consulted another trainer for this problem, and together we worked on helping Jesse overcome her aggression through remedial socialization, teaching incompatible behaviors, and management.

After years of work, and lots of help from the trainer, Jesse could walk down the street past another dog without acting out, she could perform in dog classes, and she even learned to safely negotiate with other dogs in off-leash play areas. Still, while Jesse was under good control and had improved social skills, she was never relaxed or confident when other dogs were present. And, if her stress level shot too high, the aggressive behavior would resurface.

About a year ago, we began to incorporate large doses of classical conditioning into our work with Jesse. Each time she saw another dog – no matter what she was doing – we showered Jesse with treats. Within six months, her stress response around dogs was noticeably lower. Last week, for perhaps the first time in her life, she stood in the center of a small group of dogs, tail wagging, relaxed, and confident. I would in no way consider her “fixed” at this point, but she is farther along than I would have thought possible just a year ago.

Watching a dog (or cat, or person, or any animal for that matter) overcome a strong fear is a magical experience. So is seeing our dogs becoming calmer and more confident in everyday and especially in strange, new environments. When a dog can learn to relax or even enjoy things that used to be scary, life becomes easier. Quality of life for both of you will dramatically improve.