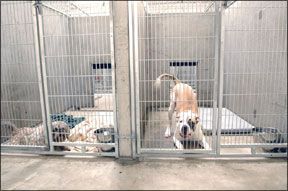 Teaching is the best way to learn. I know I’m not the first person to realize this, but it feels profound every time I remember it.

I’ve been working with volunteers at my local shelter, trying to teach everybody a little basic positive dog training, so that all the people who take dogs out of their indoor kennels for exercise, recreation, and socialization are on the same page.

We have several goals. Of course we want to make the dogs more comfortable, with a chance to eliminate outdoors, to breathe some fresh air, and have some room to run around or time to just lie in the sun and decompress from the stress of the loud indoor kennels.

We also want to help the dogs become more appealing to potential adopters. People are much more likely to consider a dog who knows even one or two basic good manners behaviors, such as “sit if you want me to open the gate” and “when in doubt, sit.”

I’ve noticed that as soon as you mention “training” to a motivated group of inexperienced dog lovers, however, almost immediately they start jerking dog leashes, kneeing jumping dogs in the chest, and saying “NO!” a lot. So my orientation speech to each potential volunteer starts out as a blatant sales pitch for positive training.

Otto is My Model

I have my dog Otto constantly in mind as I’m working with the volunteers. I adopted Otto from these very kennels on June 13, 2008. He was absolutely no different from most of the dogs in the kennels today. He was an adolescent, about seven to nine months old. (There are more adolescent dogs than dogs of any other age in shelters everywhere. It’s not hard to know why. They are neither cute puppies nor calmer adults.) He was frightened of humans and most things in the human world. He didn’t know the most basic good manners behavior, not even “sit.” His cage card indicated that he had a “rap sheet” for murder – chicken murder, that is. He had been in the shelter for almost two months.

Today, though, he’s the best-behaved, most reliable, and fun dog I’ve ever owned. Not coincidentally, he’s the first dog I’ve ever trained from day one with positive methods only – and I can’t believe what a difference it has made.

Me and my last dog, a Border Collie named Rupert, were also very bonded, but this is different. Otto’s actions and expressions convey a deeper trust in me than Rupert had. Otto is also far more motivated to try to figure out what I want, and unafraid to offer one behavior after another in an effort to puzzle out what might earn him my attention, praise, or a treat.

I owned Rupe for a number of years before I was asked to serve as the founding editor of Whole Dog Journal. I had never before been exposed to positive training for dogs – although I had been exposed to many different types of force-free horse training. Somehow, it never occurred to me to seek out similar methods for training my dog.

As a result, I used a certain amount of force-based training in Rupert’s early years. He was a classic sensitive, “soft” Border Collie, so all that was usually needed to “correct” his behavior was a stern verbal reprimand or an occasional leash correction. Not a big deal, right? Wrong! These seemingly minor transgressions on Rupe’s sensitive psyche meant that he developed into a dog who, when in doubt, would become very still. “I’m not sure what to do, but I don’t want to make a mistake and get yelled at . . . so I’ll just sit here and not look at her and hope she forgets about me.” And because I didn’t know any better, I took this for good training; because I had a dog who wasn’t being bad, I thought I had a well-behaved dog.

I suppose some people would say he was a “calm, submissive” dog.

I now know that what I really had was a cautious dog – one who knew me as someone who might scare or hurt him if he did the wrong thing.

Otto, by nature or nurture, is cautious, too. He can get frightened by new things, unfamiliar places, and loud sounds. However, he’s not afraid of me. He is not afraid or reluctant to come to me, ever. When I ask him to do something he’s not sure about, he’s like a kid whose hand shoots up every time the teacher asks a question, whether he knows the answer of not. He tries something, anything, because the odds are really good that he’ll win a prize just for trying, and there is no chance whatsoever that there will be a scary consequence if he gets the answer wrong. He likes learning; he can’t wait for a chance to “play” the training “game.”

Do No Harm to Your Dog

Neither I nor the other volunteers are there to form deep relationships with the shelter dogs. Nor is our goal to truly train the dogs. We’re there to help the dogs get adopted. The best way to accomplish this is to increase the dogs’ initial appeal; realistically, we don’t have the resources to accomplish much more than that.

But I’m adamant that we should also do no harm whatsoever. The animals in the shelter have already had enough misfortune for a lifetime; they really don’t need to learn any more about man’s potential for abuse. We’re not doing them any favors if they learn to trust humans even less, or to associate strangers with being smacked, reprimanded, yanked on the neck, or kneed in the chest – no matter their own behavior.

This is a tough concept for most people to grasp. I’m no anthropologist, but humans seem to be natural punishers. It’s not instinctive to turn the other cheek – butt cheek, that is! – when a large rowdy dog jumps on you; most people almost automatically swat at the dog. And it’s difficult to train inexperienced handlers to quickly respond to any more desirable behavior from the dog (such as standing, sitting, lying down, or walking away) with something the dog finds rewarding (food, petting, verbal praise, eye contact). It’s hard enough to even get people to recognize behaviors like standing, sitting, lying down, and walking away as “a big improvement” or “very good!” And yet, compared to jumping up, they are!

I know it’s instinctive for most people to attempt to “correct” obnoxious – and typical – shelter dog behavior such as barking, jumping up, and pulling on the leash. But instead of “correcting” them (the volunteers), I try to show them how well it works to simply ignore the undesired behaviors and quickly reinforce good (or better) ones. Fortunately, it works. It works in the short term – I can almost always demonstrate how well it works within minutes, with even the rowdiest, most frustrated, and most physically restless dogs in the shelter. And it works over the long term; Otto is exhibit A.

Best of all, these methods can be taught quickly enough for the volunteers to make obvious progress with the shelter dogs in just a single session. You can see them experiencing the joy of accomplishment when they see fast, positive results. It helps them enjoy working with the dogs so much more. So they come back more often. And the dogs get out more, and get more training. Win-win-win, to infinity.
I love this stuff.

Nancy Kerns is Editor of WDJ.