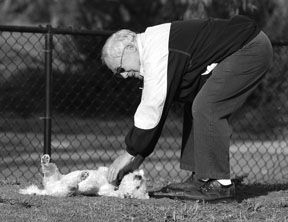 Teddy’s owners were distraught as they explained to me on the phone why they had called. Their veterinarian had told them that their nine-week-old Golden Retriever puppy was “dominant aggressive” because he was biting their hands. He had advised them to alpha-roll the pup every time he tried to bite or otherwise challenge their authority. They’d been following the vet’s instructions for a week, and Teddy’s aggression was getting seriously worse. They feared they would have to euthanize their pup. We made an emergency same-day appointment for a behavior consultation.

I found Teddy to be a somewhat assertive puppy, who enjoyed actively exploring the world with his mouth, as normal puppies do.

Like many assertive, excitable pups, Teddy also got increasingly aroused when his owners protested his needle-sharp-toothed explorations on their skin. The more they protested, the more excited (and mouthier) he got. Hence the veterinarian’s all-too-common misdiagnosis of “dominance aggression” and his woefully inappropriate prescription of alpha-rolling the pup to put him in his place.

Rolling the dice
The alpha-roll consists of physically rolling a dog onto his side or back and holding him there until he stops resisting or struggling, supposedly submitting to your superior authority.

Popularized by the monks of New Skete in their dog-training books (such as How to Be Your Dog’s Best Friend) in the 1980s, the technique is a truly unfortunate and dangerous interpretation of a normal canine social behavior. When approached by a higher-status dog, a lower-ranking member of the pack may first avert and lower his head and shoulders, then voluntarily lie down on the ground and perhaps roll onto his side or back as an appeasement or deference gesture. Typically, when an appeasement gesture is used, the higher-ranking canine has no need to assert himself by forcibly flattening the lower-ranking dog to the ground; the subordinate is already there!

Job Michael Evans, one of the New Skete monks responsible for writing “How to Be Your Dog’s Best Friend,” later left the order, and subsequently stated he regretted including the now-controversial technique in the book. While he didn’t go as far as to say the alpha roll was ineffective or inappropriate, he did say he felt it wasn’t safe for use by the general public.

Modern behavior professionals who are well-educated in the science of behavior and learning go much further, denouncing the risky technique along with other methods based in faulty dominance theory.

The most obvious negative consequence of techniques that encourage owners to physically overpower and intimidate their canine companions is the possibility of scaring or coercing the dog into defending himself. He reacts aggressively in return, angering or frightening his owner, who often responds by escalating his own level of violence. Before you know it, the relationship between the two is seriously, sometimes irreparably, damaged.

Despite compelling evidence that physical intimidation does more harm than good, some trainers today (indeed, some very high-profile ones) are stubbornly attached to the forced roll-over, cloaking it in new-age terms and turning a blind eye to the damage done to relationships between dogs and their humans in the process.

Questions of appropriateness aside, it takes someone skilled in handling dogs to be able to alpha-roll a dog without significant risk to human safety – which is at least in part why one television show where the technique is frequently used includes a “Don’t try this at home”-style disclaimer. It’s also why trainers who employ methods such as the alpha roll talk about being bitten as “part of the job,” while those who use more appropriate, nonconfrontational approaches are more likely to keep their skins intact.

Canine as a second language
Again, the alpha roll is supposed to mimic the behavior of the “top dog” in a pack, and send the message, “I’m the boss of you!” But one huge error in alpha-roll logic is the belief that we can successfully pretend to be dogs in our interactions with our canine companions. Dogs know we’re not dogs, and any attempt on our part to mimic their language is doomed to failure.

Dogs are masters at speaking and reading canine body language. Their communications to each other are often subtle and nuanced, a furry ballet designed to keep peace in the pack. Our efforts to use canine body communications are oafish in comparison – and I imagine that our dogs are alternately amused, confused, nonplussed, and terrified by our clumsy attempts to speak their language.

Violence occurs between dogs within established social groups when the communication system breaks down; it’s a sign of an unhealthy pack relationship. Ethology studies from the 1970s and 1980s suggest that canine social structure holds together because appeasement behaviors are offered by subordinate members, not because higher-ranking members aggressively demand subservience. Instead, successful pack leaders were observed to calmly control the good stuff – an approach frequently suggested by today’s modern, positive trainers as a much safer, more appropriate, and effective method for creating a harmonious mixed-species social group.

In her book, Clinical Behavioral Medicine for Small Animals, Dr. Karen Overall agrees, stating, “The behavior of the lower status individuals, not the higher ranking one, is what determines the relative hierarchical rank. Truly high-ranking animals are tolerant of lower-ranking ones.”

Methods that encourage dogs to offer deference behaviors, and then reward them for it, are a much closer approximation of actual pack behavior – and easier for us to emulate successfully – than any application of force. Use biscuits (training treats), not (alpha) rolls!

Establishing leadership
The Monks, and others like them, didn’t have it all wrong. It is important that your dog perceive his humans as higher-ranking member of your collective multi-species social group. It is far better, safer, and ultimately more effective, however, to accomplish this through offered deference rather than forced dominance.

Lindsay also cites a 1988 study (E. Fonberg, “Dominance and Aggression”), noting that dominance that is established without resorting to aggression appears to be more stable than dominance that is maintained by constant vigilance and displays of strength.

There is a multitude of ways to establish appropriate social hierarchy without resorting to aggression. No, you don’t have to go through all doorways first, nor do you have to eat before your dog does. You can simply wait for and/or encourage your dog to offer deference behaviors in order to make good stuff happen, while at the same time you make sure that pushy behavior doesn’t result in him getting good stuff.

Your dog’s driving ambition in life is to get good stuff. Some owners and trainers express concern that teaching the dog that he can get you to click! and give him a treat by offering certain behaviors elevates his status because he’s controlling you. In reality, a dog’s psychological response to deference behaviors appears to so hardwired that if a dog repeatedly performs them, he becomes deferent. It’s not just a role he’s playing, like an actor. If he does deference, he is deferent. He can’t help it.

Deference behaviors you can use to your relationship advantage include:

• Wait at the door. Dog sits and waits to go through a door, even a wide open one, until you give him permission to move forward (good stuff = go out and have fun).

• Wait for your dinner. Dog sits and waits to eat his meal until you give him permission to eat (good stuff = eat food!).

• Wait to get in car. Dogs sits and waits outside car while door is opened, hatchback is lifted, or tailgate lowered, until you give him permission to jump in (good stuff = go somewhere in the car and have fun).

• Wait to get out of the car. Dog sits and waits in vehicle while car door is opened, hatchback is lifted, or tailgate lowered, until you give him permission to jump out (good stuff = get out of car and have fun).

• Sit for your leash. Dog sits calmly to go out for a walk while leash is attached to collar (good stuff = go for walk).

• Ask to be petted. Dog sits and waits politely at your feet to be petted rather than jumping up, pawing, or nudging you for attention (good stuff = petting and attention).

• Ask for permission to jump on sofa or bed. Dog sits and waits to be invited onto furniture instead of jumping up uninvited (good stuff = lying on soft, comfortable surface and getting attention).

In each case, the dog learns to offer deference behavior in order to get the desired “good stuff” result. Appropriate (deference) behavior moves him closer to his goal; inappropriate behavior makes the good stuff go away (see “Oops, You Lose!” below).

Happy endings
That phone call from Teddy’s owners came almost 10 years ago, early in my career as a professional behavior consultant. Although I had handled many aggressive dogs during the 20 years I worked at the Marin Humane Society, I had not yet worked with a lot of aggression-modification cases professionally. I agreed to see Teddy, with the understanding that I would refer him to someone more experienced if I felt I wasn’t capable of handling his case.

He turned out to be one of the simplest aggression cases I’ve ever worked with. He just needed his people to stop frightening him with their unpredictable eruptions of violence so he could stop having to defend himself.

We began training with clicks and treats. Teddy loved the clicker game, and caught on very quickly to the concept that a “click!” equals “treat” – and even better, that he could make the click! happen by offering one of a growing list of desirable behaviors. We used a tether to restrain Teddy during training so if he did do inappropriate mouthing we could simply say “Oops!” and step out of reach of his nasty-sharp baby teeth.

In the very first session his arousal and biting lessened noticeably. By the time I returned for the second, the mouthing problem was 95 percent resolved, Teddy’s owners were tearfully grateful, and we happily moved on with his basic training.

Since Teddy, I’ve lost count of the number of “aggression” cases I’ve handled where the alpha roll was the clear and present cause of a dog’s increasing aggression. A frightening number of puppy/dog owners are still counseled by their veterinarians, trainers, other animal professionals, and well-intentioned friends to alpha roll their uncooperative canines.

It’s always better to get your dog to voluntarily buy into your desired behaviors than to try to force him. That’s the challenge, the joy, and the excitement of positive training. As the supposedly more intelligent species, we should be able to figure out how to get dogs to want to do what we want, including being deferent to us, without the use of force. Biscuits, not rolls! 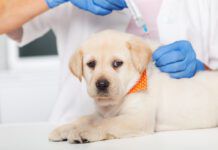 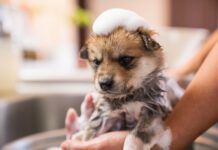 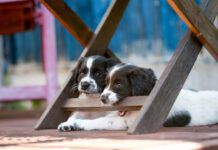