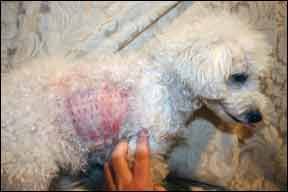 There are a few different types of tests available that purport to identify the allergens to which a dog is hypersensitive; some of them are helpful, and some are a waste of time and money. Since all of them are commonly referred to as “allergy tests,” few people know which ones are credible, and which ones are not. The following is a brief description of the types of tests available for allergy diagnosis.

– Blood (serologic) tests for antigen-induced antibodies – Two different methods (RAST and ELISA) are used for the most common commercial test products used by veterinarians, and the tests may be referred to by those names or by the name of the company whose test kit uses the methodology (such as Heska, Greer, or VARL). These tests are designed to detect antibodies that a dog has produced in response to specific environmental antigens. By identifying the antibodies, the tests were supposed to be able to deliver clues about the environmental substances that the dog’s immune system is treating as an “invader.”

Historically, the tests have been unreliable, with lots of false positive and false negative results, though the technology has improved over the years.

If the test results indicate “55 different things your dog is supposedly allergic to,” says Dr. Donna Spector, owner of SpectorDVM Consulting, in Deerfield, Illinois, it’s not particularly helpful, “and not particularly believable, when the results indicate your dog is allergic to something that he doesn’t even have significant exposure to.” However, she adds, if there is a really strong positive result, “not just one or two points above what they say is normal, but really strong results, you have something you can ask the owner about. ‘Does your pet have exposure to oak trees?’ If the owner says, ‘Oh yeah, they’re all over our property, we’re loaded with oak trees!’ then you’ve got something you can work with.” Or rather, something you can target with immunotherapy (allergy shots).

Dr. Spector has one suggestion for those considering paying for one of these tests: “It’s best to test right after the dog has gone through his worst allergy season, because his antibody levels will be the highest at that time, and you can get the best picture of what really bothers him the most. Sometimes a vet will run a blood test randomly, say, in the middle of winter, or ‘in preparation for the upcoming spring,’ and it is not as helpful.”

– Skin (intradermal) tests for environmental allergens –
In an intradermal test, tiny amounts of a number of suspected or likely local allergens are injected just under the dog’s skin. The location is shaved (the better to observe the reaction of the skin and underlying tissue) and marked (with a pen), so the response to each allergen can be recorded. Swelling and/or redness indicates the dog is allergic to the substance injected in that spot.

Identification of the substances to which a dog is allergic is helpful for two reasons. First, if the allergens that are problematic for a dog are known, the dog’s owner can try to prevent (as much as possible) the dog’s exposure to them. Second, testing identifies the allergens to be chosen for inclusion in customized allergy shots (also known as “immunotherapeutic injections”).

Most veterinary dermatologists feel these tests are much more reliable than blood tests for antibodies. It should be noted that the testing is more time-consuming and expensive, not to mention stressful for the dog, who must be observed very closely, several times, by a stranger!

– Tests for food allergies – Both blood and skin tests for food allergies exist, but it’s difficult to find anyone (besides the companies that produce the tests) who feels the results are worth the paper they are printed on. It would be exciting and useful if it worked, but so far, the tests are a work in progress, with only an estimated 30 percent accuracy rate. Why would you bother – especially when you can conduct a food elimination trial that will deliver much more accurate information about your dog’s food allergies.