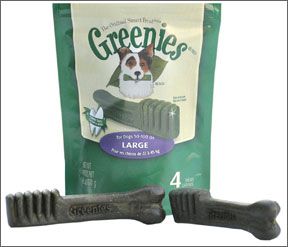 Dogs weighing 75 pounds or more may not be fully protected

On August 13, Virbac Animal Health, Inc. announced that it was recalling certain lots of Iverhart Plus® Flavored Chewable Tablets, a heartworm preventative. Routine stability testing found these lots no longer contained enough ivermectin to be effective for dogs weighing more than 75 pounds.

Lot numbers 090093 and 090095 of Iverhart Plus Large (51-100 pounds) were recalled. A third lot for small dogs (up to 25 pounds), 090073, was also recalled because it was found to be nearing the potency limit. These lots were sold to distributors starting March 20, so any product purchased earlier would not be affected.

The recalled product is not harmful, but may leave larger dogs unprotected from heartworm infection. Virbac recommends that dogs who weigh more than 75 pounds who were given the recalled product be tested five to six months after the last dose was given (I advise waiting the full six months to test your dog, since it can take that long for heartworm larvae to mature into adults that can be detected by heartworm tests).

Virbac will reimburse veterinarians for heartworm tests performed on 75-plus-pound dogs who were given the defective product. Their standard product guarantee will also cover heartworm treatment for any dog taking Iverhart Plus who is found to be infected with heartworms.

If you purchased the recalled product, you should return any unused portion to your place of purchase for replacement from a different lot number. The lot number is listed on the bottom lid/flap of the box in a white text field and on the blister foil of the individual doses. Note that even though dogs who weigh less than 75 pounds are fully protected now, the product may lose further potency over time, so it’s important to replace it rather than continue to use it even if your dog is under the weight limit. That also applies to the single lot for smaller dogs that was recalled.

Testing has confirmed that all other lots of Iverhart Plus Flavored Chewable Tablets remain potent. Only the three lots identified are affected by this recall. – Mary Straus

Sales Outlets for Greenies Have Been Restricted

In May 2009, the Greenies® line of pet dental chews disappeared from supermarkets and other mass markets. Some dog owners, aware that the maker of Greenies had been sued by owners of dogs who died, allegedly from intestinal obstructions caused by an undigested Greenies chew, assumed the company had ceased manufacturing the “dental treat.” Actually, beginning in June, the distribution of the product was reconfigured; now Greenies are available only through veterinary hospitals and pet specialty retailers.

A statement on the product website (greenies.com) explains the rationale for the change of distribution, stating, “Greenies products are marketed exclusively through pet specialty retailers and veterinary clinics where knowledgeable staff is equipped to answer pet owner questions and make the right recommendation. This is particularly important for clinically proven canine Greenies dental chews, as each of the five sizes is specially formulated to deliver the maximum dental benefit to each weight range.”

In 2006, consumer complaints and a subsequent CNN investigation uncovered 40 cases over a three-year period in which the green chews had become lodged in a dog’s esophagus or intestine. Reports indicate that 13 of those dogs died, despite veterinary treatment.

Following that investigation, the products were reformulated in order to make the chews “safe, soluble, and easily digestible.” Its website states, “Since the product was reformulated in 2006, there have been no reports of blockages or obstructions.”

Greenies may be more digestible than they used to be, but we’ve never been fans of the chews. The products don’t come in a large enough size to prevent rapid consumption by large dogs or dogs who tend to gulp or aggressively consume their chews. There are more natural products capable of helping to keep your dog’s teeth clean that don’t contain the highly processed ingredients used in Greenies – fresh, raw, meaty bones, for example. Please note that your dog must be actively supervised when chewing any product. Chews should be taken away from any dog who chews too aggressively or swallows large pieces. And when any chew is small enough to be swallowed, it should be taken away and safely disposed.

Law also protects those who report abuse to authorities

The new law requires investigating animal welfare and child welfare agencies to report suspected abuse incidences to each other. Animal welfare investigators who have reasonable cause to suspect or believe that a child is being neglected or abused must now make a written or oral report to the State Department of Children and Family Services. Investigators employed by the Department of Children and Family Services must report suspected animal abuse or neglect to the Department of Agriculture’s Bureau of Animal Health and Welfare.

The measure also provides for immunity from liability and confidentiality of identity for persons, institutions, and agencies participating in good faith to report or investigate abuse or neglect.

At least one other state has a reciprocal reporting law. California humane officers are mandated reporters, while child protection workers may report but are not mandated to do so.
– Pat Miller

In May 2009, the U.S. Food and Drug Administration (FDA) announced the approval of the drug trilostane (Vetoryl) for the treatment of hyperadrenocorticism (Cushing’s disease) in dogs.

Trilostane has been used in the U.K. since 2001, but until recently, anyone who wanted to use this drug to treat their dog in the U.S. had to fill out a lot of paperwork to get permission to import it. The FDA’s approval means the drug will now be readily available to veterinarians. There are, however, many unanswered questions about trilostane, including whether it’s safer than traditional treatment.

Cushing’s disease occurs when the body produces too much cortisol. It causes increased appetite and thirst, skin problems, muscle weakness, and panting. It can also predispose a dog to other conditions such as diabetes and pancreatitis.

There are two types of Cushing’s disease: adrenal and pituitary.

Adrenal Cushing’s is caused by a tumor on one of the adrenal glands. It is often treated with surgery to remove the tumor.There are three drugs that have been commonly used to treat the pituitary form of Cushing’s disease in dogs:

■Lysodren (mitotane) is the traditional therapy, though its use is off-label. This chemotherapy drug works by eroding layers of the adrenal glands. Lysodren is relatively inexpensive, but careful monitoring is needed to prevent a life-threatening Addisonian crisis if cortisol levels are reduced too far. Lysodren can also cause permanent changes to the adrenals, requiring continued treatment for Addison’s disease (hypoadrenocorticism).

■Ketoconazole, an anti-fungal drug that suppresses cortisol as a side effect, is safer than Lysodren, as it does not affect the adrenal glands. However, it is very expensive, especially for large dogs, and it is not effective in 20 percent of dogs. Its use in treating Cushing’s is also off-label.

■L-deprenyl (Anipryl or selegeline) is an MAO inhibitor that acts on the pituitary gland itself. While considered very safe, it is questionable how well L-deprenyl works, particularly since it’s more difficult to measure the response with this drug, and because it can take some time to begin working. The manufacturer’s study found L-deprenyl helped more than 80 percent of dogs it followed. However, a separate, independent study concluded that only 20 percent of treated dogs improved. L-deprenyl is the only other drug approved by the FDA for treatment of Cushing’s.

Trilostane inhibits an enzyme that is needed in the production of cortisol. As with Lysodren, this drug has the potential to cause a life-threatening Addisonian crisis if cortisol levels go too low. Initially, it was thought that trilostane would not cause permanent changes to the adrenal glands, but in a small percentage of cases, for reasons that are unknown, it’s been found to cause sometimes fatal adrenal necrosis as well as permanent Addison’s disease.

For these reasons, the same type of careful monitoring is needed as with Lysodren. Two studies found that the risk of either permanent or life-threatening Addison’s was 2 to 3 percent for trilostane, and 2 to 5 percent for Lysodren. Unlike with Lysodren, these adverse effects of trilostane do not appear to be dose-dependent, so there’s no way to predict which dogs may react. Trilostane is more expensive than Lysodren and must be given more frequently.

When switching from Lysodren to trilostane, it’s best to wait at least a month in between. Dogs who have been treated with Lysodren in the past may be more susceptible to the effects of trilostane.

Both Lysodren and trilostane can also be used to treat the adrenal form of Cushing’s, when surgery is considered too risky. – Mary Straus