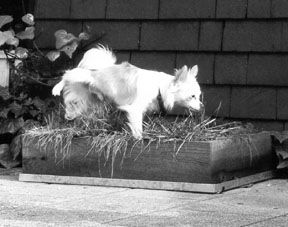 We receive numerous letters from readers who need help with their dogs’ behavior problems. In most cases, we suggest that they consult a trainer; the Association of Pet Dog Trainers is a good resource for locating local trainers who use primarily positive methods, and we list the organization’s contact numbers on page 24 of every issue. Occasionally, however, we ask our training editor, professional trainer Pat Miller, to respond to the reader’s situation, especially if the answer may be of use to many other WDJ readers. The following is one such problem and response

Help! I have a problem with my Brittany Spaniel urine-marking in my house. He’s 4½ years old, and we have another older male dog, a six-year-old Labrador. We adopted the Lab when he was 1½ and already neutered. We adopted the Spaniel when he was three, and had him neutered six months ago when he was four.

The marking happened once or twice before he was neutered, but has become much more of a problem lately, long after the procedure. He’s not new to our household anymore, so I can’t attribute the marking to a competition between the two dogs.

He always marks at the front door of our house, often when someone walks by, which makes me think it’s a territoriality issue. It’s very hard to catch him in the act and therefore difficult to discipline him.

I’ve tried No-Go (a chemical repellent), and I’ve tried putting our clothing on the spot where he marks to try to communicate that it does not belong to him. I also tried putting a doggie diaper on him when we think he is likely to mark, but that chafes him if we leave it on too long. I took him to the veterinarian to see if he has a physical problem and he does not. This is clearly behavioral.

I want him to be part of our family, so I won’t confine him to his crate or to one room of the house when we’re home and everyone else is together. I know that would control the problem but that’s not the environment I want to create for him or for us.

However, this problem is not only harming our furniture, but also harming the bond between the dog and us; it’s making our home unpleasant!

If it makes you feel any better, you are not alone. A surprising number of dog owners across the country find themselves faced with this challenge at one time or another. In fact, one of my apprentices has been struggling with it, with Newman, a Shih-Tzu/Terrier mix rescue dog she recently adopted. I understand the stress that your Brittany’s behavior puts on your relationship, and applaud you for the commitment you are making to maintain his position as a full-fledged family member.

You have touched on many of the common suggestions for dealing with marking behavior, but I would like to explore some of them further.

You mentioned a veterinary exam, and kudos to you for this. Many behavior challenges have medical roots. It is always important to find these (or rule them out) prior to investing in behavior modification techniques that can’t succeed if the dog has a physical problem that interferes with his ability to perform. You don’t go into detail about what tests your veterinarian conducted on your dog, but some of the things that may contribute to a marking problem are urinary tract infections, medications such as Prednisone that can cause a dog to drink more water, or other medical conditions, such as hyperthyroidism or kidney malfunction, that can cause a dog to drink excessive water and/or urinate more than normal. I will assume that your vet checked for all of these, and more, in your dog’s exam.

You hypothesize that your dog may be responding to the presence of someone walking by the house, which would indicate a possible territorial component – often a cause of inappropriate marking. It may also be that he is trying to get outside to urinate – dogs who soil at the door are often trying to tell us that they have to go out. It is impossible to really look into our canine companions’ brains to know for sure what they are thinking. We can do interesting mental exercises and come up with some pretty good guesses, but to a large degree, the cause, if not medical, is far less important than the cure. I’m going to expand on the often-successful solutions you have already mentioned, and suggest a few new ones for you to try.

Managing the environment
If your dog only marks at the front door, one easy answer is to find a way to routinely block his physical access to that spot, perhaps with one or more baby gates or exercise pens in strategic places. Of course, you may wish to actually modify the behavior, and blocking his favorite marking spot may simply induce him to mark elsewhere, so read on for some more in-depth solutions.

First, if you do manage to catch him in the act, try to interrupt, rather than discipline him. I use a cheerful “Oops! Outside!” interrupter instead of an angry “No! Bad Dog!” Trust me, I know how hard it is to be cheerful when you see your dog lifting his leg in the house, but too much discipline can teach him to do it only when you aren’t looking. That’s not the training goal here!

You are on the right track when you put your clothing on the spot, but you may need to use something more meaningful to him. He may think you and your clothing do belong to him, or are at least community property open for marking.

For starters, be sure you have thoroughly cleaned the area with one of the several products now on the market, such as Nature’s Miracle, that contain enzymes that destroy odor causing bacteria in the dog’s urine. Then try one or more of several different environmental changes to his marking zone. For example, dogs rarely soil their own dens and eating areas, so you might put his bed or food and water bowls by the door.

You can also change his association with the spot by doing training, massage, and play sessions there. Drop treats around the previously soiled area on a random but high-frequency basis. Finding treats gives him something different to think about in that spot.

You can also tether him near the area for short periods, 10 to 20 minutes at a time, to help him think of it more as a living space than a marking zone, and even anchor chew toys near the spot with a length of sturdy twine to further the positive association.

You mention that the doggie diaper you used caused chafing. Did your dog soil the diaper, or stay dry when it was on? If he stayed dry, then this can be an effective management tool for short periods when you don’t feel like supervising him closely. You might also look for a different brand of diaper. There are several on the market and one might fit him better than others. You could also try lining the parts that chafe with a softer material.

I understand why you don’t want to crate him away from the family and agree that this isn’t a productive solution, but you do need to be able to supervise him more closely so he doesn’t have the opportunity to make mistakes. Tethers and leashes are great for this. (See “Tethered to Success,” WDJ April 2001). The leash works fine when you have free hands; the tether is perfect when you are too busy to hold the leash. You can set up tether stations all over the house, so your dog can always be a part of family activities. Of course, he mustn’t be allowed house freedom when no one is home. It is appropriate to crate him for a reasonable period of time during the day when no one is around to supervise, and at night when you are all sleeping. If he would be crated routinely for much more than eight hours a day, you will need to arrange for someone – family member, neighbor, or pet sitter – to come by and let him out for a potty break during the middle of the day.

Housetraining redux
Then, in conjunction with your program of closer supervision, go back to the housetraining schedule you would use for a young puppy (see “Minding Your Pees and Cues,” WDJ December 2001). Take him out on leash, every hour on the hour at first, and reward him for going outside.

After a week with no accidents, increase the time to two hours. After another successful week, go to three hours between outside trips. Any backsliding is a reminder to increase supervision, and a red flag to return to the previous week’s potty schedule. When you get another pee-free week, you can increase the time again.

On the off-chance that his marking at the door is really related to needing to go outside, be sure to install a noticeable signal during this training period, if he doesn’t already have one, so he can let you know he has to pee. If you get excited whenever you take him out for a potty break, he will learn to get excited as his cue to you that he has to go. If you encourage him to bark each time you take him out, he will learn to bark to tell you his bladder needs relief. If you teach him to ring a bell with his nose or his paw (by putting a bell on a string, or positioning a portable wireless electric doorbell where he can reach it) before you allow him to go outside, then that will become his cue.

I know many people who have been successful in stopping their dogs’ urine marking with a combination of behavior modification, closer supervision, and retraining techniques. For example, my apprentice’s dog was determined to be hyperthyroid, and medication for that condition, plus judicious use of a belly-band (doggie diaper) succeeded in overcoming his marking behavior. You sound like you, too, have the commitment to make the necessary effort to be successful. I bet you can do this!

-Pat Miller, WDJ’s Training Editor, is also a freelance author and Certified Pet Dog Trainer in Chattanooga, Tennessee. She is the president of the Board of Directors of the Association of Pet Dog Trainers, and published her first book, The Power of Positive Dog Training, in 2002.