Behavior problems such as anxiety or aggression are commonly diagnosed in pet dogs, and, as many dog owners have discovered, can be quite challenging to fully resolve. Daniel Mills, FRCVS, a veterinary researcher and behaviorist at the University of Lincoln (England), suggests that a large portion of behavior problems are exacerbated or caused by physical pain, and that resolution of that pain can mitigate or even resolve the behavioral issue. Almost 80% of the behavior problems in his own practice, says Dr. Mills, have a component of diagnosed or suspected pain.

Dr. Mills is passionate about raising awareness of the importance of recognizing and treating pain in behavior cases – so much so that he has collaborated with other researchers and behaviorists to publish a framework for thinking about these cases, along with a case series of examples from his and others’ practices.

Mills describes a number of cases sharing a recurring theme: The initial veterinary consult reports the physical exam, blood work, and possibly even radiographs as “unremarkable.” Yet a subsequent exam with a veterinarian considering pain as a possible cause turns up something suggestive – perhaps an awkward gait, an uneven weight distribution suggesting the dog is shifting weight off one leg, or the owner reveals under more pointed questioning that the dog has been reluctant to go for walks recently. Often, an old injury that was thought to be resolved is mentioned. Further testing finds a likely cause of pain – or, sometimes, not. But either way, a trial of analgesics results in return to normal behavior.

• Pain causing secondary behavioral issues in addition to existing ones.

• Behaviors that may not be problematic to owners, but are actually signs of pain.

Let’s look at each of these categories in turn.

Vets are less likely, however, to recognize some of the more unusual manifestations of pain, such as star gazing (staring at the ceiling or sky) or compulsive disorders, which can be indicative of gastrointestinal [GI]distress; pica (compulsive eating of non-food objects), which may be related to musculoskeletal pain in addition to the more obvious GI link; hypersensitivity to heat or cold; increased clinginess and seeking of attention from the owner; as well as behaviors more commonly considered problematic, such as fear, anxiety, aggression, resource guarding, or destruction of household items when left alone.

In fact, differences between presentations of aggression can point veterinarians to suspicion of a pain component. In the cases described by Dr. Mills, dogs with pain-based aggression are often described as Jekyll and Hyde-like, with unexpected and sudden behavior changes. Pain-based aggression appears to occur more commonly when dogs are approached by a person, particularly when they are lying down. These dogs are more likely to bite a limb than any other part of the body, and their aggression is briefer and easier to interrupt.

Behavioral changes caused by pain may be more subtle than outright aggression. Dogs performing at a high level in work or sports may begin to show degraded performance that doesn’t have a clear cause, but resolves when pain is identified and addressed.

While pain may certainly prevent a dog from reaching his full athletic potential, it can also have more psychological effects, such as making learning more difficult. The dog may appear to be less able to absorb training; imagine trying to listen to a challenging lecture with a splitting headache.

Initially, picking apart which behaviors are due to pain and which are due to other triggers may be nearly impossible. However, as some unwanted behaviors are resolved through treatment of a behavioral diagnosis, while others begin to appear intractable, the relevance of pain may be revealed.

In one such case, a Border Collie with separation anxiety was destructive when left alone, digging through carpet and door frames. While his anxiety appeared to improve with anti-anxiety medication and behavioral modification, his digging did not. Pain in a hind leg, redirected to nearly compulsive digging with his front legs, was resolved with medication, and the digging stopped.

In this case, the digging initially appeared to be part of the dog’s separation anxiety, and as a result, difficulty in resolving the digging was initially assumed to indicate that the anxiety had not resolved. In fact, the two problems were separate.

The relationship between pain and behavior is bidirectional; stress in the form of frustration, fear, or anxiety can cause a negative outlook that increases the perception of pain, while pain can itself increase stress. In fact, tensing from anxiety can directly exacerbate musculoskeletal pain. Who hasn’t snapped at a co-worker or spouse when dealing with a headache or other chronic pain?

These cases will often present with behavior that appears out of proportion to its cause. An animal’s responses may be excessively intense, or the dog may generalize more quickly and widely than otherwise expected.

For example, a noise-sensitive dog may be startled by a loud noise in one location and then rapidly generalize to avoiding a wide area (perhaps even miles) around the original source. Such over-generalization may provide a hint that there’s more going on than simply a learned association with the original startle resulting in sound sensitivity.

Impressive reduction of reactivity may be achieved in such cases with regular pain medication or other measures to reduce pain, like appropriate physiotherapy, even if the root of the anxiety remains.

It is easy for us to normalize behavior that is in fact not healthy, such as the labored breathing of a flat-faced dog, repetitive scratching of the neck which might suggest syringomyelia (a cyst within the spinal cord), head shaking indicative of an ear infection, or just an unusual sitting position in a dog who cannot hold his legs or back normally, perhaps secondary to obesity or a spinal malformation.

ADVOCATING FOR YOUR DOG

Veterinarians may not be alert to these multi-factorial problems. Indeed, Dr. Mills confides that despite being an established veterinary behavior expert and leading academic in the field, he still struggles to convince some vets (those in general practice and also specialists in relevant disciplines like orthopedics) about the significance of this issue. Presented with a behavioral issue, they may reach for a behavioral solution. While a veterinarian may consider pain, given a normal physical exam and other testing, he may not pursue a trial of analgesics or even more conservative pain management measures. Addressing pain is often seen as an avenue of last resort, when nothing else resolves the primary problem. Mills argues that pain should be addressed first, not last.

Moreover, if pain is a reasonable possibility but no cause is apparent on physical exam or testing, Mills typically recommends a trial course of analgesics. Many documented behavior cases have shown significant improvements or even resolution when treated with pain medication.

If the first analgesia trial does not provide results, it is appropriate to try another type of analgesic with a different mechanism of action, in case the first was not right for that dog’s particular issue. Mills argues that the risk of side effects can be minimized and that the benefits of using pain medication will normally outweigh the risks, but it is important that any trial is done under veterinary supervision as over-the-counter medications for humans can be quite toxic to dogs.

If you suspect your dog may have a behavioral issue rooted in or exacerbated by pain, advocate for her. Encourage your veterinarian to investigate possible causes of pain. Suggest trialing a course of analgesics, and keep a diary to report behavioral changes.

If you do find that you’re dealing with a case of pain-related behavior, encourage your veterinarian to contact Mills. His work is ongoing, and he hopes that he can bring veterinary behaviorists together with the wider veterinary community to build momentum on recognizing the importance of identifying and treating pain in behavior cases. He continues to collect case histories for this work.

Mills notes, “Dogs work incredibly hard to fit in, and if they don’t, we need to ask why.” As a society, we are lucky to have access to incredibly effective pain medication – don’t hesitate to consider its use under veterinary guidance when you think your dog might need it.

Jessica Hekman, DVM, Ph.D., is a researcher at the Karlsson Lab at the Eli and Edythe L. Broad Institute of MIT and Harvard, studying the genetics of canine behavior. She also teaches online webinars and courses about canine genetics. Dr. Hekman lives with her husband and two dogs, with whom she participates in agility and canine parkour. On April 16, Dr. Hekman will be presenting a webinar on the use of probiotics in dogs for behavior change. 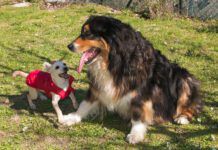