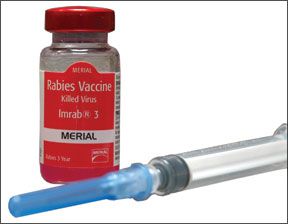 Arkansas canines and their humans have very good reason to celebrate the start of the new decade. That state’s new rule allowing for a three-year rabies vaccine became effective January 1, 2010. This means dogs in Arkansas will need to be vaccinated only every three years (after their initial first-year booster) instead of annually, as was previously required.

The majority of states in the U.S. now allow for the three-year vaccination schedule. Despite a slightly premature announcement from the Rabies Challenge Fund (rabieschallengefund.org) last August that all 50 states had accepted a three-year protocol, a few still do not. Rhode Island’s Rabies Control Board approved a change in April of 2009 accepting the three-year vaccination, but as of yet no effective date has been set. Until that happens, Rhode Island dog owners are still required to vaccinate their canine companions every two years. West Virginia also requires vaccination bi-annually. There may be a few others. Still, every state that approves a three-year schedule is one step closer to that 50-state goal.

Meanwhile, the Rabies Challenge Fund is now raising funds for a fourth year of the Rabies Challenge Study at the University of Wisconsin School of Veterinary Medicine. It will cost about $150,000 per year to cover the remaining four years of the seven-year study that hopes to confirm that rabies vaccinations are effective for at least seven years. This would reduce the necessity to vaccinate as often, and minimize exposure to the potentially carcinogenic adjuvant that is part of the vaccine, as well as to the sometimes deadly adverse reactions some dogs experience to the vaccine.

The second phase of the project will finance a study of the adjuvants used in veterinary vaccines and establish a federal adverse reaction reporting system for rabies and other vaccines.