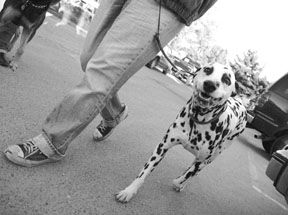 By Randy Kidd, DVM, PhD This has become a nation of fat people – and fat dogs. Once again our dogs are mirroring us, no matter how bad that picture looks. It has been estimated that (depending on the survey and the way “obese” and “overweight” are defined) from about 25 percent to more than half of dogs seen by veterinarians are overweight or obese, and many practitioners feel that even these numbers grossly underestimate the true extent of the problem. For more perspective we can refer to numbers from a medical database maintained by Banfield, The Pet Hospital (a chain of 500-plus veterinary hospitals). Its data indicate that of the 3.5 million animals seen in the chain’s hospitals each year, almost 83 percent are categorized as exceeding their recommended weights. More worrisome, the obesity trend seems to be accelerating in recent years, much as it has in humans. The percentage of heavy dogs seen at Banfield increased from 49 percent to 83 percent from 1999 to 2004. The problem of defining obesity in dogs stems in part from the wide variance that exists in “normal” weights for different breeds. Most fat experts define an “overweight” dog as being 10 to 15 percent above the ideal weight for the breed; an animal is obese when he weighs 15 to 25 percent or more than the breed’s ideal weight. Another way to look at obesity is to look at it structurally rather than limit its definition to a set weight standard. Under this guideline, obesity can be defined as an increase in body weight beyond the limitation of its skeletal and physical requirements, resulting from an accumulation of excess body fat.