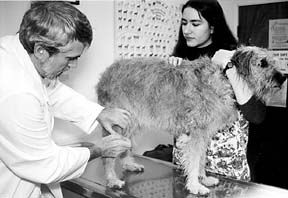 “I just set eyes on Gracie and I knew.” That’s how Mary Ellen Grimaldi describes first seeing the approximately two-year-old Beagle-Shepherd mix at the New York state animal shelter. Not surprisingly, her first impressions held true. “She has been an absolutely wonderful dog,” says Grimaldi.

Wonderful, but allergic. Gracie, a mid-size dog with a smooth, short coat, soon began showing signs of allergies. “She was licking her feet constantly, rubbing her face, rolling, generally itchy,” says Grimaldi. “And I didn’t know that licking feet was the typical manifestation of allergies.”

At Gracie’s next routine veterinary exam, Grimaldi learned that the dog’s itchiness was due to inhalant allergies. The veterinarian recommended a fatty acid supplement and an over-the-counter antihistamine. “That really helped her,” says Grimaldi.

But only for a while. Gracie’s itchiness worsened and she developed skin lesions, believed to be hot spots or lick granulomas. A hot spot, or pyotraumatic dermatitis, is a bacterial skin infection that results from a pet’s constant licking and chewing. Hot spots are painful, swollen patches filled with pus. A lick sore, acral pruritic dermatitis, is caused by a dog’s constant licking. As the dog licks, the hair is rubbed off. The skin becomes red and begins to itch. Eventually, the skin becomes raised, thick and hard. To treat the lesions, the veterinarian recommended a topical cream, oral prednisone, and an Elizabethan collar to prevent licking and chewing. This approach worked only temporarily, says Grimaldi. “The lesions never got horrible, but it was only because we kept on top of it. At the first sign, we treated her and kept her away from them. However, when we’d take the collar off, she’d be right back at it.”.

Introduction to acupunture
In June 1998, Gracie developed a stubborn lesion inside her left elbow that wouldn’t heal despite treatment. Gracie’s veterinarian gave Grimaldi two choices: psychotropic drugs or acupuncture. “I was pretty skeptical about acupuncture, but my husband didn’t want to go with tranquilizers,” says Grimaldi. They chose acupuncture.

For the acupuncture treatments, Grimaldi was referred to Nina Caires, DVM, of Parkside Veterinary Associates in Albany, New York. Dr. Caries has been practicing veterinary medicine for 20 years, but in the last three years has integrated her Western medicine practice with traditional Chinese medicine. Dr. Caires is certified by the International Veterinary Acupuncture Society. First, Dr. Caires took a detailed history, and, not surprisingly, the holistic veterinarian’s first recommendation was a diet change, from Kibbles and Bits to a better quality food. Dr. Caires recommended that Gracie continue on the antihistamine and fatty acid supplement. She also recommended weekly acupuncture treatments.

Traditional Chinese medical practitioners consider a hot spot to be caused or aggravated by “stagnation of chi,” chi being the energy that flows through the body along energetic pathways or “meridians.” Obstructions in energy flow are thought to cause disease. “In doing acupuncture,” says Dr. Caires, “what we’re trying to do is balance the body, open the meridians up to allow the chi to flow more smoothly.”

In addition, holistic practitioners would tend to regard Gracie’s traditional treatments as suppressive and shallow, treating only the symptoms of an underlying problem. The goal of acupuncture is not “to stop the itching and scratching,” but to stimulate the body to solve the imbalance that is causing the itchiness.

Initially, Dr. Caires found treating Gracie to be a challenge due to the dog’s intense nervousness. “At first Gracie was very sensitive,” says Dr. Caires. “It took me a while to gain her confidence because she is – or, at least she was – very nervous and afraid. As we were treating her for the lick granuloma, we talked about her behavior and the fact that she was a timid dog, very wary of new people.”

In fact, Gracie’s licking, itching and chewing got worse when she was alone. This led Dr. Caires to believe that Gracie’s itchy condition was compounded by separation anxiety, which can be defined as increased fearfulness of the dog after the departure of the owner. For example, after their owners leave for work, anxious dogs might bark or howl, have bowel or bladder “accidents” or destroy things. Dogs that form intense attachments with their owners are more likely candidates for separation anxiety. Gracie missed her owners during the day, but says Grimaldi, “Instead of destroying the house as so many dogs do, she just turned it on herself.”

To help calm Gracie before her acupuncture treatments, Dr. Caires recommended Rescue Remedy. The flower essence (see “Flower Power,” WDJ March 1999) remedy helped Gracie relax at the clinic, but didn’t help much at home. Dr. Caires then tried other Bach flower essences to treat Gracie’s emotional needs: a combination of Heather, Star of Bethlehem, Aspen, and Mimulus. Additionally, Dr. Caires suggested obedience training – not because Gracie was a disobedient dog, but to address her early socialization and training, which are questionable due to her history as a shelter dog. Positive training can also boost the confidence of a dog who is not quite sure and apprehensive of what is expected of her.

Multi-layered approach
Today, Gracie is a changed dog. She is less nervous, more accepting of new situations and her allergies are under control. She continues to take an antihistamine daily and receives acupuncture treatments every two or three months. “I’m sure that her progress here was a combination of all of these things: the acupuncture, the Bach flowers, the diet change,” says Dr. Caires, who also credits the training work that Mary and Ellen and her husband are doing with Gracie. The couple decided to start Gracie in agility work, something they (and Gracie) find enjoyable. “We’re competing, but it’s pretty laughable,” says Grimaldi. “Mostly she runs off the course at the public venues. But if we go to the course she’s used to when we practice she does really well.”

Grimaldi is thrilled with Gracie’s progress. “People remark now when they see her that she’s calmed down,” she says. “Her basic nature will probably never change; she’s still a timid dog. But in new situations she’s a lot less anxious than she used to be. She’s happier, bouncier, a spring in her step, more confidence.”

Even though she was reluctant to try acupuncture, Grimaldi now wholeheartedly recommends it to others. “I think whenever you have the chance, you should consider an alternative treatment before a more drastic approach,” she says. “I would definitely go this route again with a different dog.”

Virginia Parker Guidry is a freelance writer from San Diego, CA. This is her first article for WDJ.