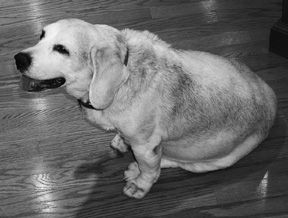 – Try giving your dog a low-gluten or gluten-free diet if he has chronic health issues.

– Keep your veterinarian apprised when making changes to your dog’s diet and/or medication. In the best case scenario, your dog’s improvement on a gluten-free diet teaches the veterinarian something!

– Read the labels of all foods and treats you give your dog. Don’t forget the foods you share with your dog.

Does your dog suffer from allergies, joint pain, epilepsy, recurrent ear infections, or other chronic health problems? Have you tried lots of treatments – alternative and conventional – but you just can’t seem to help your dog get well and stay that way? You might want to look a little closer at the diet recommendations of John Symes, DVM.

For the last four years, he has advocated (in his clinic and on his Web site) a feeding regime for dogs that eliminates gluten grains (including wheat, barley, and rye), all dairy products, soy, and corn. “The response was so dramatic that I was afraid at first that I’d cure myself out of practice,” he jokes.

Dr. Symes, who calls himself “Dogtor J,” himself suffered for more than 40 years from a variety of health problems. He had allergies, heartburn, depression, chronic fatigue, intestinal problems, memory difficulties, joint pain, balance issues, and fibromyalgia. He took a small pharmacopoeia of drugs to ease his symptoms, but didn’t feel well.

Then his brother was diagnosed with celiac disease. “My brother gave me a list of 20 symptoms of celiac disease; I had every one of them,” explains Dr. Symes. He went to his doctor and was tested. His self-diagnosis was confirmed; like his brother, he had celiac disease.

Celiac disease, also known as gluten intolerance, is a condition in which glutens – proteins found in some cereal grains – cause destruction of the villi in the small intestine. The damaged villi are unable to function properly, resulting in poor absorption of nutrients.

Eliminating the offending foods will usually bring about a reduction or even elimination of symptoms, sometimes in just a matter of days. After adopting a new, gluten-free diet, it wasn’t long before Dr. Symes was off his drugs and feeling better than he had in a very long time.

“It was amazing how quickly I felt better,” he says. In just four days, he had a noticeable improvement in his health and well-being. And he said the same quick results often happen with dogs, too.

As Dr. Symes researched his own ailment, he began to see similarities between problems suffered by gluten-intolerant people and the ailments of many of his four-legged patients. This made him start wondering whether the commercial canine diets, most of which are loaded with gluten-containing grains, were causing the problems he saw most frequently in his veterinary clinic.

Dr. Symes dug deeper into the problem of why gluten caused so many health issues for people and pets. “In a nutshell, after all of my research, I decided that the center of our health universe lies in the duodenum, a ‘J-shaped’ stretch of intestine that I now call Pandora’s box,” he explains.

The duodenum is key to digestion in both dogs and people. A variety of digestive enzymes, such as protease and amylase are secreted there, as are hormones, bile acids, and other substances needed for efficient digestion. The duodenum is lined with the tiny, finger-like villi. As the enzymes and acids break up the food molecules into even smaller parts, such as amino acids, sugars, fatty acids, vitamins, and minerals, these nutrients are absorbed into the bloodstream by the capillaries within the villi.

With celiac disease, the body reacts to gluten by producing IgE antibodies. This onslaught of antibodies damages the villi, sometimes irreversibly. This may cause the appearance of allergy symptoms, such as itchiness and diarrhea. The internal damage, however, is even more insidious. Without adequately functioning villi, vitamins, min-erals, and other nutrients are not properly assimilated, creating a kind of subclinical malnutrition. This process is sometimes referred to as malabsorption or “leaky gut syndrome.”

Gluten can act like glue in the intestine, clogging the villi. This in turn can result in villous atrophy in those who are susceptible. “It’s the nature of the starches to be sticky,” says Dr. Symes. “As it turns out, the foods that are the ‘stickiest’ are the ones that cause the most problems. Wheat and soy are the worst, while oats and rice seem to be the best – the least sticky. Corn is in the middle.”

Now he can see why lamb and rice foods have become so popular. “Rice is the least of the adhesives and thereby the least potentially allergenic,” he says.

People whose villi have become damaged due to celiac disease (and other causes) often experience difficulty in digesting foods that contain lactose. This is because “lactase,” the enzyme needed to break down lactose, is produced in the microvilli. When the microvilli are inflamed and irritated – by celiac disease or other causes – they stop producing the amounts of lactase needed to properly digest lactose, and the person suddenly becomes lactose intolerant. Many doctors recommend that their patients with celiac disease go on a gluten-free and a dairy-free diet, to give the microvilli a chance to rest and recover. Often, after a period of a gluten- and dairy-free diet, the person can start eating dairy products again.

Of course, Dr. Symes recommends a gluten-free diet for all of his canine patients who suffer from apparent allergy symptoms or poor digestion. What you may not expect is that he also recommends a gluten-free diet for ALL dogs! Not all his clients are willing to switch foods, or see any need for a change in their dogs’ diet. However, the ones that do are often pleasantly surprised and wouldn’t change the food back.

But the most dramatic turnarounds Dr. Symes has seen in his patients has been with dogs suffering from one of two chronic conditions: allergies or idiopathic epilepsy. He’s had dogs who were scratching themselves raw stop scratching just days after changing their diet to a gluten-free one. He’s also had canine epilepsy patients who stopped having seizures once their diets were switched.

Allergy testing confirmed that Max was allergic to the ingredients of every food he’d ever been fed. On top of that, he had inhalant allergies to 35 of the 40 substances he was tested for. Dr. Symes recommended switching Max to a duck and potato food.

“I remember how amazing it was when we switched his food,” says Davidson. “Immediately the situation reversed itself.” That was more than three years ago. Max, now 13, still occasionally needs an antihistamine tablet when his inhalant allergies flare up, or will need an extra thorough ear cleaning. The rest of his once ubiquitous allergy symptoms are gone.

“I often see the worst of the worst respond that quickly,” says Dr. Symes. “It’s amazing how quickly their immune systems get back to normal.”

Dr. Symes has noticed a similar effect with himself. After changing his diet to combat his celiac disease, he found that he no longer had the full-blown allergic response he had always had with cats.

These diet recommendations also have profoundly helped some of his patients with idiopathic epilepsy. “After switching their diets to a gluten-free diet, they stopped all seizures within days, now are off all medications and seizure-free,” says Dr. Symes.

“Buddy was having at least one grand mal seizure a week that we knew of, God knows how many he had during the day while we were gone,” says Brenda Strain. Buddy, a Standard Poodle-cross, started having seizures shortly after the Strains adopted him at five years old. He was also troubled by allergies and received antihistamines regularly to control his symptoms.

“His seizures were pretty dramatic. He would try to crawl over to us, and hit the floor and furniture,” says Strain.

Strain took Buddy to see Dr. Symes. His first suggestion was to change Buddy’s food. Strain switched Buddy to IVD’s rabbit and potato variety dry food, and then later to the duck and potato type.

“Buddy didn’t have another seizure for months, except once when I ran out of food,” says Strain. She didn’t make it to the clinic in time to pick up Buddy’s food, and purchased a bag of lamb and rice food to tide him over until she could get his special food. Within 24 hours, Buddy had a seizure. “We now buy two large bags of the duck and potato food at a time,” says Strain. In addition to the seizures stopping, Buddy has had some relief from his allergies. “The diet seems to help a lot, he’s not as itchy.”

Every dog may not have the same dramatic results as some of Dr. Symes’ patients. However, a change in diet may be a great place to start if you’ve hit dead-ends with other treatment options. As Dr. Symes says, “If dogs can be cured of epilepsy almost overnight with a change in diet, what else can a change in diet do?”

It is important to carefully read the labels of dog foods (whether they are dry, canned, frozen, or dehydrated) and the labels of treats. Some foods contain hidden sources of the following items.

Choose foods WITHOUT the following ingredients:

– Wheat, barley, and rye. Dr. Symes regards oats as the safest grain, as far as allergies are concerned. He says that oats do contain high levels of glutamate and can contribute to pain and epilepsy in some animals.

– Rice, if allergies persist after removing the grains listed above. At this point an owner is down to dry foods that use potato or sweet potato for carbohydrates.

– Beef and fish, only if allergy systems are present and persist after eliminating the above ingredients. In Dr. Symes’ experience, some dogs have secondary allergies to these proteins, and improve on other protein sources.

Shannon Wilkinson is a TTouch practitioner, life coach, and freelance writer who lives with a dog and cats in Portland, Oregon.