Stomach bloat is something that every dog owner should be aware of. Knowing the early signs of bloating in dogs and the best ways to prevent it can mean the difference between life and death for your dog, and a full or empty bank account for you.

DOGS THAT ARE HIGH RISK FOR BLOAT

Really any dog (or cat) can bloat, but it is far more likely in large breed, deep chested dogs. The Great Dane is far and away the No. 1 breed when it comes to bloat. Other high-risk breeds include the Greyhound, St. Bernard, Weimaraner, German Shepherd, Boxer, and setter breeds.

Any large dog (over 90 pounds) should be considered at risk, and this risk increases with age. Interestingly, the Bassett Hound, though smaller, also has a greater than normal propensity to bloat.

CAUSES OF BLOAT IN DOGS

Nobody knows exactly what causes bloat or why it happens in some dogs and not others, but there are certain things that have been linked to an increased risk of bloating including:

WHAT HAPPENS WHEN DOGS BLOAT

If excess gas starts to accumulate in the stomach for whatever reason, the distension quickly kinks off both the entrance and the exit of the stomach, so there is no way for the dog to dispel the gas that’s normally accomplished by burping or passing gas through the intestines.

Additionally, the pressure from the gas compromises the blood flow to the stomach wall, which starts suffering tissue injury right away. Then the big gas-filled stomach starts putting pressure on the great vessels that return blood to the heart (these travel underneath your dog’s backbone), which compromises cardiac output and general circulation, throwing your dog into shock.

At a certain point, the gas-filled larger part of the stomach (the “body” of the stomach) starts floating upward and flips over, resulting in a twisted stomach. This compounds all the issues mentioned above and accelerates the speed of progression of this disastrous medical condition. Without emergency surgical intervention, dogs with GDV die a painful death from cardiovascular shock and septic peritonitis from stomach devitalization and/or rupture, and it can happen within hours.

SIGNS OF BLOATING IN DOGS

Bloating dogs usually appear uncomfortable, if not distressed. It comes on suddenly. They are restless and may pace. Drooling and panting are common. Their bellies sometimes, but not always, look distended, and they may react painfully to pressure placed on their left flank. It’s common for dogs to display frequent, unproductive retching like they are trying to vomit but can’t.

Get to a veterinary hospital as soon as any suspicion arises. Time is of the essence! If your dog receives treatment early enough, twisting of the stomach may be avoided and the full snowballing, life-threatening process described above may be averted.

To have this surgery performed or not, that is the question. There are many opinions about this; it may just come down to what feels right for you and your dog.

Why wouldn’t you do it? Well, it’s a pretty major surgery to put your dog through when you don’t even know if he’ll ever bloat. There are risks (and significant cost) associated with any surgical procedure. And even if you have your dog ’pexied, it doesn’t mean he can’t bloat. It only means the stomach can’t flip. So you may still have some costly emergency visits for decompressing simple bloats if they occur.

Why would you do it? Maybe you’ve had Great Danes your whole life and have lost a few to bloat. There’s something to be said for doing whatever you can to avoid that traumatic, heart-breaking experience again. The most obvious time to consider it would be if you have an at-risk breed with a history of bloat in the line. Some might opt for prophylactic gastropexy on these breeds even with no history in the line.

If you do elect to have a prophylactic gastropexy performed on your dog, I encourage you to find a facility that offers it as a laparoscopic procedure. With laparoscopy, the incisions are much smaller, post-operative discomfort is way less, and recovery time is shorter than with traditional surgery, where the abdomen is opened with a large incision.

Once the stomach has been decompressed and cardiovascular status is stabilized, the dog is taken to surgery. At surgery, the stomach, if twisted, is repositioned and then sutured or tacked to the body wall (gastropexy) to prevent reoccurrence of GDV. Even if the stomach didn’t twist this time, gastropexy is recommended, as the risk of recurrence of bloat with twisting in the future is high. Any devitalized or necrotic stomach tissue identified is removed. The spleen is sometimes collaterally damaged when the stomach rotates and must be removed or partially removed if damaged.

Post-operative care is intensive. Even if your dog makes it through surgery, he is not out of the woods for at least the next 24 to 72 hours, as post-operative complications are common. These include infection, sepsis, DIC (disseminated intravascular coagulation – a life-threatening diffuse clotting problem that can happen after a massive physiologic insult like this), and potentially fatal cardiac ventricular arrhythmias.

It’s pretty obvious this is a situation you’d be better off preventing if possible. The list of simple things to do to avoid bloat includes:

Even if prevention is not possible, the most important thing is to be aware of the signs of bloat and be ready to respond quickly. 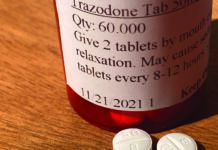