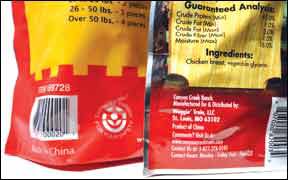 Reports that chicken jerky treats imported from China were linked to illness in dogs began in 2006. The dried treats that have been associated with problems go by a number of names, including tenders, strips, chips, wraps, twists, and more. The U.S. Food and Drug Administration (FDA) and American Veterinary Medical Association (AVMA) first issued warnings about these treats in September 2007, saying that more than 70 complaints had been received, involving 95 dogs who experienced illnesses that owners suspected were linked to these treats.

The FDA issued another warning in December 2008, and again in November 2011 after reports increased. By 2012, over 1,300 complaints had been received, including reports that dogs had died. The Canadian Veterinary Medical Association also began receiving reports of illness in 2011.

MSNBC reported in March 2012 that internal FDA documents it obtained showed the brands of chicken jerky most often cited in priority 1 cases (those the FDA considers most reliable) are Waggin’ Train, Canyon Creek Ranch, and Milo’s Kitchen. Other brands often named by consumers include Kingdom Pets (Costco) and Smokehouse.

All of these treats have been associated with a type of kidney failure in dogs called acquired Fanconi syndrome. Recovery can take up to six months, and some dogs have died or been left with chronic kidney disease. Affected dogs may show any or all of the following signs:

-Vomiting and diarrhea, sometimes with blood

If your dog experiences any of these symptoms after eating treats imported from China, stop feeding them immediately. If signs are severe or persist for more than 24 hours, take your dog to the vet for tests and treatment. Save the bag of treats in case they are needed for testing in the future. You and your vet should file a report with the FDA (see “How to Report a Pet Food Complaint,” www.fda.gov/petfoodcomplaints). You should also report the problem to the company that manufactured the treats and the corporate office of the store where you bought them.

The big question is, why hasn’t the FDA recalled these treats instead of just issuing warnings? Its position is that until it can identify the causative agent, it cannot force a recall. According to the FDA’s website, “To date, scientists have not been able to determine a definitive cause for the reported illnesses. . . . It is important to understand that unless a contaminant is detected and we have evidence that a product is adulterated, we are limited in what regulatory actions we can take. The regulations don’t allow for products to be removed based on complaints alone.” The FDA adds, however, “There is nothing preventing a company from issuing a voluntary recall.”

In July 2012, the FDA released the results of tests it has conducted looking for salmonella, heavy metals, furans, pesticides, antibiotics, mycotoxins, rodenticides, nephrotoxins (such as aristolochic acid, maleic acid, paraquat, ethylene glycol, diethylene glycol, toxic hydrocarbons, melamine, and related triazines), and other chemicals and poisonous compounds. It is not clear which tests were done on actual products suspected of having made dogs sick versus random samples. Propylene glycol was found at low levels in about half of the samples where laboratories tested for this substance, but the levels were considered to be nontoxic. Propylene glycol is often used as a humectant in semi-moist pet foods. Beginning in March 2012, the FDA also inspected several facilities in China that produce chicken jerky products, but it refused to release those findings.

Pressure has recently intensified, with Sen. Sherrod Brown and Congressman Dennis Kucinich, among others, seeking action from the FDA. At least three class action lawsuits have been filed, one against Nestlé Purina (makers of Waggin’ Train and Canyon Creek Ranch brands) and Walmart (where the treats were purchased). The other two suits were filed against Del Monte and its subsidiary, Milo’s Kitchen. Despite this, the companies that import these treats have refused to stop marketing them, and the stores that sell them, with the exception of some independent pet food stores and small chains, refuse to take them off their shelves. They are everywhere, including Costco, Sam’s Club, Walmart, Target, Lowe’s, Petco, PetSmart, and grocery stores.

When the same problem surfaced in Australia, reports of Fanconi-like syndrome in dogs almost disappeared after certain products were recalled in 2008 and 2009.

In addition to chicken jerky, VeggieDent Chews for Dogs were also associated with Fanconi-like syndrome in Australia (see “VeggieDent Chews Recalled in Australia,” WDJ August 2009). No reports of similar problems with these treats have been reported in the U.S. or elsewhere. The big difference is that Australia required these treats to be irradiated in order to kill pathogens. Interestingly, at least two brands of chicken jerky – Waggin’ Train and Canyon Creek Ranch – are also subject to irradiation in the U.S., according to information on the brands’ websites. Could that be why the FDA can’t find contaminants? It will only comment that, “We are considering irradiation as one potential factor in the jerky problem.”
While neither the FDA nor the AVMA will come right out and tell consumers not to feed their dogs these products, Dr. Tony Buffington, the Ohio State University Veterinary Medical Center’s veterinary nutritionist, created a poster to warn clients of the risk of feeding their pets chicken jerky. The poster reads in part, “Until a cause or explanation can be found, we urge our clients not to purchase or feed chicken jerky products to their pets.”

The take-home message is that pet owners must exercise extreme caution when buying treats for their pets. It is not easy to determine where treats are made. A product may say “manufactured in the U.S.” without revealing that the source of the ingredients is China. At best, you may find “Made in China” in tiny print on the back of the package. To be safe, stick to treats you know for certain are made in the U.S. or Canada using ingredients from those countries, or make your own treats.

For more information:
Questions and Answers Regarding Jerky Pet Treats from China:
www.fda.gov/AnimalVeterinary/SafetyHealth/ProductSafetyInformation/ucm295445.htm