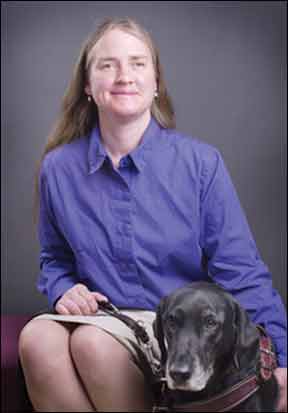 Deborah Allen, of Boise, Idaho, feeds a dog food diet that combines a commercial pre-mix with raw ground turkey to her two Labrador Retrievers: Hartford, a highly active, 6-year-old working guide dog who weighs 76 pounds; and Lily, a moderately active, 14-year-old retired guide dog who weighs 53 pounds. Their veterinarian says both dogs are healthy, but they have begun losing weight and developing skin problems in the last few months. Hartford is about 4 pounds and Lily about two pounds under their ideal weights.

Allen is limited in what she can feed her dogs due to their food allergies or intolerances. Hartford has digestive problems (vomiting, loose stools) and gets itchy when fed lamb or chicken. He tolerates beef and bison, but has been only fed small amounts. Lily won’t touch beef or bison, and has the same reaction to lamb that Hartford does. She tolerates small amounts of chicken. Hartford can eat ground elk, but Lily reacts to it similarly to lamb. In addition, Allen suspects that both dogs may have problems with grains and possibly flax. She is concerned that her dogs’ skin problems are due to the lack of variety in their diet.

Here is the diet Allen currently feeds her dogs, which she started last March. These amounts are daily totals, split between two meals:

– Lily gets an occasional raw chicken wing, and Hartford gets dry homemade beef heart bits, but not regularly

Mixed Company
Pre-mixes, such as The Honest Kitchen’s Preference, are designed to provide a complete diet when combined with fresh foods that you add yourself. There are many such products available, but only a few are guaranteed to meet Association of American Feed Control Officials (AAFCO) nutrient guidelines for “complete and balanced” products when fed according to instructions. Few companies provide a complete nutritional analysis of their products; some, in fact, have never done such an analysis.

Also, instructions for adding foods vary considerably from one company to the next. For example, one tells you to add ¾ cup of oil per 2 pounds of meat, creating a recipe that derives 67 percent of its calories from fat (41 percent of calories are from the oil alone). This is more fat than even working sled dogs need, and is likely to cause digestive upset and even pancreatitis in susceptible dogs. It could also lead to nutritional deficiencies because the non-fat portion is such a small percentage of the diet.

I trust The Honest Kitchen more than most companies when it comes to pre-mixes. The Honest Kitchen provides a complete nutritional analysis of all of its foods. Only Preference is a true pre-mix, incomplete without the addition of fresh foods, though the product literature encourages you to add up to half a cup of “extras” to each dry cup of The Honest Kitchen’s other products. It advises adding 1 to 2 cups of meat (raw or cooked) per 1 dry cup of its Preference mix, as Allen does, but the number of calories provided would vary tremendously depending on the fat content of the meat.

Diet Details
In August, Allen switched from Foster Farms regular ground turkey (with 15 percent fat) to its lean variety (with just 7 percent fat). In October, she noticed that her dogs were losing weight. The difference in calories between the two types of turkey is significant, about 300 calories a day for Hartford and half that much for Lily, which would explain the weight loss. Allen increased the amount of Pure Vita kibble she was feeding, but the dogs are still losing weight.

The amount of protein in this diet is more than adequate. The turkey alone supplies all of the protein that Hartford needs, and most of what Lily should get. Like all meats, turkey is a complete protein source, supplying all essential amino acids as well as taurine (which may be conditionally essential for some dogs).

The fat in this diet would be on the low side without the added oils, especially for Lily, who gets less meat, although not excessively restricted. With the added oils, the diet has an appropriate fat content, about 46 grams per 1,000 calories for Hartford, and a little less for Lily.

While the total amount of fat is fine, the distribution may not be. One-fifth of the total fat in Hartford’s diet and almost one-third in Lily’s diet comes from olive oil, which supplies primarily oleic acid, an omega-9 fatty acid that competes with essential omega-3 and omega-6 fatty acids for uptake in the body. Most of the useful omega-3 fatty acids (EPA and DHA) in this diet are supplied by the fish oil supplement (they can also be found in algae). Poultry fat is a good source of omega-6 fatty acids, primarily linoleic acid (LA), while beef, lamb, and other red meats are low in LA.

The amount of omega-3 and omega-6 fatty acids is adequate, but the ratio of LA to EPA and DHA is over 16:1 (not counting the added kibble). Linoleic acid is pro-inflammatory, while EPA and DHA are anti-inflammatory. Since omega-6 fatty acids also compete with omega-3 fatty acids for uptake, it is likely that the dogs are not absorbing enough EPA or DHA. This could explain the skin problems that Allen sees in her dogs. Increasing the amount of EPA and DHA and decreasing the amount of olive oil will help to correct this imbalance and may help to resolve the skin issues.

I advised Allen to reduce the amount of olive oil to 1 teaspoon (down from 1 tablespoon) daily, and either increase salmon oil to 5 grams (about a teaspoon) or add 1 teaspoon cod liver oil. This lowers the ratio of LA to EPA and DHA, and removes much of the competing oleic acid, while only slightly reducing the total amounts of fat and calories. The advantage to using cod liver oil is that most supplements provide about 400 IU vitamin D per teaspoon. Recommended amounts of vitamin D for humans have increased in recent years; more may be beneficial for dogs, too.

I recommended that Allen supplement with vitamin E due to the added oils in her diet, which increase the need for vitamin E. Both dogs should get an additional 25 IU vitamin E daily. Since vitamin E is fat-soluble, it’s okay to give larger amounts less often. For example, she could give 200 IU vitamin E once a week rather than 25 IU daily.

The revised diet is slightly lower in calories due to the decrease in the amount of oil. Allen is adding a duck egg a day for Hartford (which he is more likely to tolerate than chicken eggs) and a chicken wing a day for Lily (a chicken egg would be a better choice) to increase calories and variety. She will also include canned salmon in the diet soon, if her dogs can handle it. Both dogs now get 1 teaspoon olive oil and 5 grams salmon oil plus a human multivitamin daily (salmon oil will not be given on days she feeds fish).

Allen could have returned to the higher-fat turkey in place of the new foods, but the increase in omega-6 fatty acids might have contributed to inflammation, and the diet would have been higher in fat than either dog needs. In addition, variety is always preferred to feeding just a single protein source, even though it does not appear that the lack of variety caused the dogs’ problems.

One month after making the above changes, Allen reports, “The dogs are both doing great! Their coats are noticeably more silky, their food-seeking behavior has reduced, they are more energetic, and they are putting on weight. I will probably have to cut back on the kibble soon.” 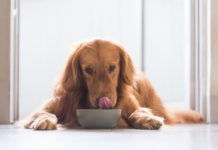 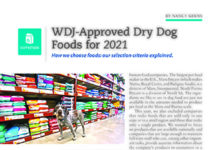 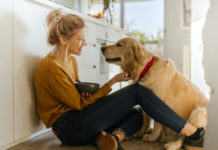