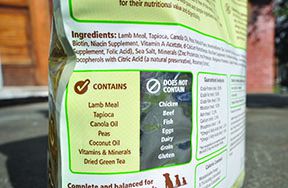 Have you ever wondered whether the label information on your dog’s food packaging is accurate? If so, welcome to the club! We fret about this sort of thing, too – and sometimes, our worries turn out to be well-founded.

There are a host of laws that regulate pet food labels, the broadest one being the Food and Drug Administration’s Federal Food Drug and Cosmetics Act, which requires all food labels – pet food included – to be truthful.

Other FDA regulations for the label require proper identification of the product (the contents must match the label); a net quantity statement (amount of food inside the package is accurately described on the outside); the name and place of business of the manufacturer or distributor; and proper listing of all the ingredients in the product in order from most to least, based on weight.

The FDA also reviews specific claims on pet food, such as “maintains urinary tract health,” “tartar control,” and “improved digestibility,” to make sure that the company wishing to make those claims can provide evidence that the statements are supported by sound scientific research and testing.

Believe it or not, there are also state and federal laws that address the point size of the type that can and must be used for various parts of the label, the location of various bits of information on the label, and even the adjectives that may be used to describe the food.

Pet Food Police – Not!
Sadly, we all know that laws are useless if there is no surveillance or enforcement. State feed control officials bear the responsibility for monitoring pet food labels and testing products to make sure they are accurately labeled. By all accounts, some states have well-funded programs, with vigilant feed control officials who consistently review pet food labels and routinely pull samples to test. However, other states have virtually zero surveillance and testing – unconscionable when you consider that pet food companies must pay each state for a permit, with fees based on tonnage sold, wherever their products are sold.

If they find something illegal on the label, or pull a sample and determine that the product is not accurately labeled, state feed control officials can order a “stop sale” of the product in their own state and/or fine the company for the infraction. Again, in some states, this happens frequently; in others, never.

In the states where pet food surveillance, testing, and enforcement are alive and well, feed control officials are mainly focused on whether the products are labeled truthfully, and whether testing confirms the accuracy of the guaranteed analysis (GA).

Even in the states with a reputation for strict surveillance, however, it’s rare that pet owners will ever learn about failed tests or enforcement actions taken by state feed control officials. If labeling infractions are found or testing reveals that the GA is inaccurate, officials and pet food companies almost always resolve the issues without ever notifying the public.

Guaranteed Analysis
The GA is important to pet owners and regulators because it’s where the macro-nutrients of chief concern to pets are quantified. By law, only four items are required to be listed on a pet food’s GA: The minimum amounts of protein and fat; and the maximum amounts of crude fiber and moisture. Minimums of protein and fat are used, because, from a dog’s standpoint, these are the significant components of the food – and from a dog owner’s perspective, they comprise a goodly share of what you are paying for.

Crude fiber and moisture are expressed in maximum percentages, since both are nutrient-free (though they do have functions in the formula).

The numbers given for crude fiber and moisture are nearly always perfectly accurate. But dog owners should be aware that the minimum amounts listed for protein and fat are just that: the minimum amount that is in the food. Sometimes, the actual amount is far higher. This isn’t a huge problem for most of us, but owners of dogs who need to have scrupulously restricted fat in their diets (such as dogs who are prone to pancreatitis) should never trust the amount listed on the GA alone.

Why don’t the pet food companies use more accurate numbers on the GA? It’s partly to make sure that the products won’t fail a test of the minimum amounts of protein and fat, and partly to account for variations in nutrient levels in their raw ingredients.

If your dog needs a restricted fat diet – or maybe you just want to test the professionalism of your dog’s food maker? – contact the food company and ask for the actual amounts of protein and fat in your dog’s food. Every company should be able to provide this information for every product they make; after all, the products are tested for these levels during the production of every batch. We wouldn’t recommend buying products from any company that can’t or won’t provide this information.

Some companies list both the guaranteed analysis (what the product is guaranteed to contain) and the “nutrient analysis” (the actual amounts as confirmed by lab tests of a typical batch) for all of their products on their websites. This consumer-friendly strategy is ideal.

Where’s The Beef?
We’ve often been asked whether there is any way to know that the ingredients that are listed on the label of a pet food are really in there. There is! In recent years, lab tests have been developed that can identify specific animal proteins and grains.

We were interested in running some of these tests the moment we learned they existed, but our ardor cooled when we learned the cost of the tests – prohibitive for even the most motivated consumer – say, someone who owned a valuable dog who is seriously allergic to beef or wheat. We consoled ourselves that the out-of-our-reach tests were not necessary; we’ve always assumed that the risk of bad press for a pet food company who could be caught in the act of cutting corners or handling its ingredients in a sloppy way was far greater than any benefit of doing so.

But then this happened: An article appeared in the October 2012 issue of Petfood Industry magazine, authored by Laura K. Allred, PhD, president of ELISA Technologies, Inc, which happens to be one of the labs capable of such testing. In the article, Dr. Allred described animal protein and grain identification tests conducted by ELISA Technologies on 21 commercial dog foods. The results shocked us:

Eight of the foods tested positive for an animal protein not listed on the ingredient label. (For example, a food was found to contain beef, but the label did not indicate beef was in the formula.)

None of the products tested, including the products that were caught with inaccurate labels, were identified in the article. And the article, written for an industry audience, included lots of helpful suggestions for how a pet food maker could avoid what were assumed to be accidental contaminations or production errors in the future, in order to “more confidently guarantee both the safety and authenticity of their products.”

Of course, we drew a different conclusion: That we absolutely have to find the money in our budget to order a bunch of tests of various foods. We looked up the prices – and were thrilled to learn that the cost has dropped quite a bit since we last checked. We’re choosing products to include and getting samples ready now.  And you can bet that we will report the full results of every test we order.

Nancy Kerns is Editor of WDJ.