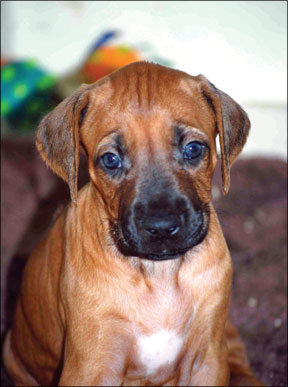 You know you’ve been feeding raw for a long time when it no longer seems like a radical, ground-breaking, or – ubiquitous adjective for beginners – scary way to feed.

When I started feeding raw – a dozen years and three generations of Rhodesian Ridgebacks ago – it was the Middle Ages of raw feeding. Ian Billinghurst’s Feed Your Dog a Bone was the hard-to-find illuminated manuscript (the lax editing could have stood some sprucing up by Benedictine monks), and everyone used the unfortunate acronym BARF, which stood for “bones and raw food” (or, later, the loftier-sounding “biologically appropriate raw food”). No commercial raw diets were available, and new converts dutifully ordered their Maverick sausage grinders over the Internet. The instruction booklet said the table-top grinder couldn’t be used on any bones harder than chicken necks or wings, but everyone ignored that. I can still remember the painful whirring of the motor, and then the crackles and pops as the thin ropes of ground meat and bone came out the cylinder.

Early days
Like many people, I started feeding raw reactively, not proactively. I had a new dog, my first show dog and first Ridgeback, who just wasn’t thriving on kibble. I remember setting down Blitz’s first raw meal with great fear and trepidation. And then – anticlimax – he didn’t choke, die, or even look at me cross-eyed. He ate, he thrived, and off we went and never looked back. Three more adult Ridgebacks followed, and dozens of puppies, who in turn had puppies of their own. All got their start in life on raw-food diets.

Back then (and still today), the Holy Grail of raw feeders was a quality meat source at affordable prices. Through local dog folk, I learned about Armellino’s, a butcher in nearby Huntington Station, New York, who was a wholesaler of naturally reared poultry – chickens and turkeys raised without hormones or pesticides. Joe Armellino was your go-to guy for a free-range Thanksgiving dinner. And he had turkey necks – dare I hope? Did I hear that right? – for a bargain 79 cents a pound.

By my second or third trip there, as I gratefully accepted my 10-pound bag of turkey necks, Joe asked me quizzically, “Are you starting a soup business or something?”

“No,” I replied with a chuckle. “I grind this stuff up for my dogs.”

And as I explained my feeding regimen – the noise, the blood, the guts, the time – lights started going off for Joe. Maybe he could buy a commercial grinding attachment. Maybe he’d order that BARF book. This was a bit of back to the future: His father, who had owned the business before him, used to sell minced meat for dogs.

Today, 12 years later, my dogs still eat at Joe’s. His business has gone to the dogs – literally – and his store walls are lined with dog photos, from Danes to Dachshunds, who get their sustenance there. Joe doesn’t do mail order, he doesn’t do any fancy packaging or marketing. He just gets the meat directly from the source, grinds it, puts it in 2- or 5-pound sleeves, freezes it, and then sells it to the steady stream of doggie customers who are now a major part of his business.

Passing it on
My puppies are weaned on Joe’s ground food mixed with evaporated milk at four weeks old. When the pups are around six weeks, I tell their new owners what I’m feeding, instruct them to order a good multivitamin and fish-oil source (for those nifty omega-3s), and have them stop by to visit Joe. (If they’re not local, many will invest in a freezer and schlep back for a food run every few months.)

I also provide them with a list of “don’t panic” points, including, “Don’t freak out if you don’t see your puppy drinking a lot. Her food is so well-hydrated, she won’t be constantly lapping up water like her kibble-fed counterparts.”

The three main problems with raw feeding for newbies are the time, the cost, and the learning curve. Joe solves the first two: His food is convenient (just thaw out overnight, dump in the bowl, and add supplements) and affordable (about the same price as a high-quality kibble).

As for the learning curve, I’ve fed this family of dogs for more than a decade. I know what to expect in terms of their growth needs. The biggest advantage to feeding raw is being able to control what you feed. (Which is the disadvantage to commercially prepared raw diets along with, frankly, price.) I am sure an Alaskan Malamute breeder instructs her puppy people to feed differently than I do, as would a Yorkie breeder. Our dogs, in their genetic programming, process food differently. So when my Ridgeback puppies hit 4 months, and their ears start doing a Sally Field (hello, “Flying Nun”) because teething is taxing their little bodies, I know to increase the calcium and fat in their diets, and I can literally watch their crimped ears flatten and their flat feet knuckle up.

Such breed-specific nutritional knowledge doesn’t happen in a decade, or two. I am fortunate in my breed to have a long-time mentor, Alicia Hanna of Kimani Kennels. She’s taught me how to reverse rickets in Ridgebacks; that’s what the above description is, really. And she drove home for me the importance of the old British saying “Half the pedigree goes through the mouth” – you really are what you eat.

Getting vets to buy in
Veterinarians are often the biggest obstacle to owners who would like to feed raw. And I understand why: They are worried about owners who will take shortcuts and compromise their dog’s health in the process, far more than any fear of salmonella contamination. (Your garden-variety smoked pig’s ear carries a similar risk.)

Any skeptical vet I have ever encountered has been put at ease when I tell him or her these two things: First, I know the source of my dog’s meat, which is raised as holistically as anything I can buy in the supermarket for my own consumption; and second, I understand the importance of having a calcium source. This meat has a more-than-adequate bone content, and it’s finely ground to the consistency of hamburger meat to mitigate any issues of perforation or compaction. (Supposedly, grinding the bones negates any teeth-cleaning benefit, but life is nothing if not a series of compromises. And that’s one I can live with.)

“Well,” the vet invariably says. “You’ve done your homework. But the average pet owner isn’t as conscientious.” Maybe so, but it’s my job as the breeder to instruct my puppy people on how to feed correctly. And there’s a huge piece of me that thinks the lowest common denominator is a terrible place at which to set the bar.

All this is not to say that raw-feeding doesn’t have its drawbacks. Last year, I almost lost a litter of puppies when they contracted enteritis, an intestinal bacterial infection, presumably from the constant licking of their very fastidious raw-fed dam. Desperately watching as my puppies faded, and unsure what to do, I put them on a liquid antibiotic, and they all rebounded. Now, all my expectant mothers go to a cooked diet with added carbohydrates for increased milk production about halfway through their pregnancy until the puppies are weaned at eight weeks.

It works, it works, it works
After that close call, why do I continue to feed raw, you might ask. Because in all the years I have been feeding this way, I haven’t had any major health issues with my dogs. They stay vibrantly healthy and look like a million bucks. The longer I am in dogs, and the more I talk with old-time breeders who themselves are becoming an extinct breed, the more I take this simple truth to heart: Health shows from the inside out. No matter how fantastic a pedigree, it can be ruined by bad nutrition and bad rearing. Common sense prevails: Dogs need sunshine, exercise, and good, whole, hydrated food.

Dog people – especially serious dog people – like to get all self-righteous about how they feed. It’s our way or the highway. I want my puppies to be raw-fed and I strongly encourage that way of feeding (just as I do minimal vaccination and pesticide-free landscaping), but in the end I realize I don’t have control. And I also realize that changes in lifestyle and economics also impact how we care for our dogs. In an ideal world, they shouldn’t, but who lives in an ideal world all their life?

My Ridgebacks aren’t the only litters I have around the house: My human kids consist of 6½-year-old triplets. When they were toddling, I was concerned about bacterial cross-contamination. And the cost of diapers and formula (I’m holistic, but breast-feeding triplets? – I’m not that holistic!) was beginning to make a real dent in our budget. So I began cooking the Armellino food, boiling it up in a pot with a grain source such as barley, to stretch it a little further. I did that for about two years, until the kids were bigger and could be trusted not to, say, lick the dogs’ food bowls or stuff fistfuls of raw turkey in their mouths.

But it wasn’t until I looked back over that time that I noticed some subtle changes in my dogs. They were still generally healthy on the cooked, carb-loaded diet, but I noticed an increased frequency of acute problems: the occasional ear infection or impacted anal sac, for instance. A homeopathic vet suggested I start a journal to note these little changes, and if I had followed that advice during that period, I’m sure I would have noticed additional “nickel and dime” changes that the cooked food brought – and not for the better. If ever I needed proof of the price we pay when we destroy the enzymes and nutrients in our dogs’ food by cooking it, there it was.

In the end, what raw feeding taught me were the same life lessons we all take to heart: Never act out of a place of fear. Embrace common sense. (If whole foods are good for us, why should our dogs be any different?) Keep things simple. Act locally. (Thank you, Joe.) And master the use of the prepositional phrase “In my experience” at the beginning of any sentence involving a controversial subject like raw feeding. Because your experience is your experience, whether others agree or not. 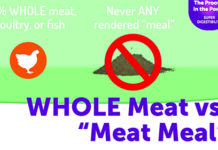 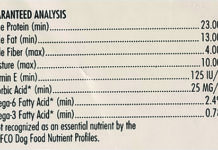