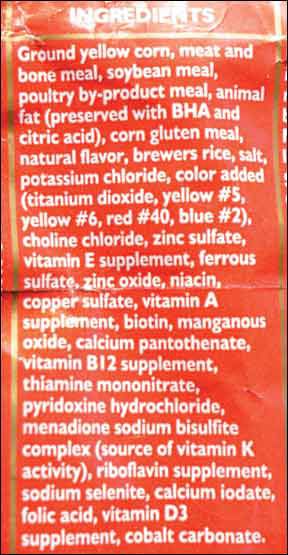 Fungus is more than a nuisance when it comes to corn; it can be deadly to dogs (and humans). Actually, it’s not fungus itself that’s a problem; the peril is a secondary chemical product created by the metabolic process of certain fungal species, in particular, Aspergillus flavus and Aspergillus parasiticus. Aflatoxin, the chemical produced by these fungi is not just toxic, it’s one of the most carcinogenic substances known to science.

Most people associate particularly wet years with fungi, but the two species of fungi that produce aflatoxin tend to proliferate in grains – especially corn – with damaged seed coats. Extreme heat and drought, such as that seen in the Midwest this year, produces a lot of stressed corn with damaged seed and thus, fungal infections.

There isn’t much that farmers can do to fight the fungal infections. If they visually observe lots of fungal growth, they try to harvest early, dry the corn well, and pay particular attention to the moisture levels while the corn is stored.

Dog food producers have to be vigilant in testing all the grains they use – to a far lesser extent, aflatoxin can also be produced by wheat, sorghum, and soy – but corn poses the greatest risk of aflatoxin infection. The Food and Drug Administration (FDA) set an “action level” for aflatoxin, the maximum amount of aflatoxin allowed in corn meant for human food, pet food, young animals, or dairy cattle, at 20 parts per billion (ppb). Corn meant for breeding beef cattle, swine, and mature poultry is allowed to contain as much as 99 ppb; corn meant for “finishing” swine or cattle can be higher (<200 ppb and <300 ppb, respectively). If the destination of the corn is not known, the maximum allowable level of aflatoxin is <20 ppb.

When pet food is found to be contaminated with aflatoxin, the recalls are generally swift and well-publicized, due to the fact that dogs’ lives are dramatically threatened by the chemical. A dog who has exposure to a high level of aflatoxin may suffer from acute necrosis of the liver, resulting later (if he survives the acute event) in liver cirrhosis (where liver tissue gets replaced by scar tissue), and/or liver cancer. But chronic, lower levels of aflatoxin poisoning can also sicken and kill dogs; most notably, low, chronic levels of aflatoxin in a dog’s diet can cause liver cancer. There is no direct antidote for aflatoxin poisoning, though supportive treatment for the liver may help acute cases.

While pet food companies obviously don’t want their products to be contaminated with a deadly substance, it takes vigilance and a commitment to food safety practices to prevent the inadvertent use of aflatoxin-contamined corn and other grains. Manufacturing plants that produce a particularly high volume of food and/or lower-cost pet foods are at higher risk of failing to detect ingredients with higher levels of aflatoxin.

Corn that has been harvested from the 2012 summer’s crop will be finding its way into pet food soon, and on into next spring and summer. It would be prudent for dog owners to absolutely avoid buying low-cost (i.e., low-quality) dog food that contains corn, especially products with corn high up on the ingredients list. High-quality products that contain small amounts of corn (low on the ingredients list) would be safer; no corn at all may be safest yet, at least until next year’s crop can be assessed.

Most WDJ readers aren’t buying the least-expensive foods available anyway, but it might be a good time to educate your friends and relatives about the ingredients label of their dogs’ food. Let them know that foods containing high levels of corn are especially risky for their pets until at least next fall. And be alert to any signs of liver problems in dogs who eat food that contain corn, such as lethargy, loss of appetite, vomiting, orange-colored urine, and jaundice.