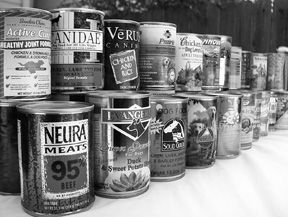 Caring guardians of companion canines often wonder whether one form of commercially prepared food – kibble or canned – is better than the other. The truth is, both types of food have relative advantages and disadvantages in terms of palatability, digestibility, and necessity for preservatives or other chemical additives.

While they generally meet the same chemical composition standards in terms of vitamins, minerals, and amino acids, these types of food provide very different nutritional value. Canned foods contain more protein and fat than dry foods, and they typically contain a greater percentage of animal-based ingredients than dry foods (see sidebar: “Comparing Apples to Apples: The Dry Matter Comparison,” next page). There is a limit – about 50 percent – to the amount of animal-based products that dry foods can contain; the machinery that mixes and extrudes kibble “gums up” if less than half of the dry food ingredients are carbohydrates (cereal grains like corn or starches such as potatoes).

By and large, canned foods contain higher quality protein ingredients than dry foods. Generally, the lesser quality pet food ingredients, such as processed and rendered products such as meat by-products, meat and bone meals, and animal digests, are routed toward dry food production lines, which require lower-fat, lower-moisture ingredients for extrusion or baking.

More whole ingredients, such as meat and poultry appear at the top of the list in canned foods, because they are high in natural moisture content. Lower-quality canned foods utilize “meat by-products,” which contain no muscle meat, but consist of organs such as intestines, spleens and lungs, and other parts of the carcass that are undesirable or unfit for human consumption. Chicken or poultry by-products may contain a little bit of muscle meat, but are still mostly “guts.”

Meat or poultry “meals,” which are produced by rendering, are widely utilized in dry foods, but are not generally used in canned foods. The raw starting material is ground to a mushy consistency by a huge auger. Then it is cooked for several hours. When the mixture is cooled, the fat (tallow) rises to the top and is skimmed off and routed, according to its composition, for edible products like animal feed, or industrial, cosmetic or agricultural uses. The remaining material is mostly protein and water. When the water is removed, a dry, powdery, mostly protein “meal” is left.

Meal that is identified solely as “chicken meal,” “beef meal,” or “lamb meal” is generally a higher quality product; it is supposed to contain only the muscle meat (which may include non-skeletal muscles such as the esophagus or diaphragm) of the animal. When a meal gets more generic by name, such as “meat meal” or “meat and bone meal,” you’re likely dealing with very low-quality ingredients.

Both dry foods and canned foods are cooked at high temperatures, which kill bacteria and other pathogens. While all the types of cooking employed in the production of pet food alter the proteins and destroy the enzymes in the meat-based ingredients, cooking actually makes the grains and starches more digestible. (All cooking methods cause the proteins in meats and meat by-products to lose their original molecular shape; this is called “denaturing.” This protein alteration is why meat changes color from red to brown when it’s cooked. Enzymes – special proteins that are used by the body to regulate its chemical and metabolic reactions – tend to be very fragile and are destroyed even in the lower temperature ranges used for baking.)

Preservatives
One of the most notable differences between canned and dry foods is the use of preservatives, which must be used liberally in dry foods (but are not generally added to canned foods) to combat the ill effects of exposure to oxygen. The interaction of oxygen with fat – known as oxidation – causes rancidity. Rancid fat not only smells bad and can put a dog off his food, but also can make a dog sick if he eats it. Fats intended for use in dog food are almost always preserved with antioxidants by the supplier before they are even shipped to the manufacturer, and food makers are required to list these antioxidants on the food label. Again, dry foods require the use of a greater quantity of preservatives because of the need for stability in a wide range of storage conditions.

Preservatives are also used to retard the growth of microbes like bacteria. While extruded foods are relatively “sterile” after departing from the high temperature and pressure environment of the screws, they may be re-contaminated during the drying process, or by bacteria lurking in the sprayed-on coating materials. Mold spores, which are ubiquitous in the air, can also sneak into the bag with the food. Preservatives also help prevent deterioration of vitamins and other nutrients.

NOTE: We’ll be discussing more about natural and artificial preservatives and “date of manufacture” labeling requirements in the next issue of WDJ.

How canned foods are made
The process of canning was devised in 1809, when a clever Frenchman was hired to provide his government’s troops with preserved food for their campaigns. The goal was, and still is, to sterilize the food to prevent spoilage. Today, dog food is canned through a process similar to the one your grandma employed to “put up” peaches and other garden produce, but on a very large scale!

First, fresh or frozen meat and/or by-products are ground to a fine texture and sent to a cooker/mixer. There, the ground meat is mixed with the grain or starchy vegetable ingredients (like potatoes or peas), vitamins, minerals, additives like anti-caking agents and stabilizers, and water.

This mixture is heated to the specific temperature necessary for producing the desired texture, which varies according to the ingredients. Mixtures containing mainly carbohydrates must be cooked at high temperatures to “gelatinize” the carbohydrates, while lower temperatures can be used when there is more animal tissue in the mixture.

Canned foods typically contain less grain than dry foods, so different combinations of time, temperature, pH, and vegetable gums are used to gel and thicken the food. “Nuggets,” “slices” and other shapes are molded from either natural tissues or, more commonly, from texturized plant proteins. Some foods contain vegetables like carrots and peas that will appeal to the consumer who opens the can (though not necessarily to the dog). These may be real veggies, or artificially colored and shaped ones.

After cooking, the mixture is pumped to a heated storage reservoir above the filler/seamer machine, which fills 300 cans (or more) a minute, puts on the lid and seals the seams. If the mixture was initially cooked at low temperatures, steam must be injected to displace the air to create a vacuum. Hotter mixtures create their own steam.

After the cans are sealed, they are sterilized in a “retort,” which raises the temperature enough to kill pathogenic bacteria, specifically Clostridium botulinum, which causes botulism, a particularly nasty form of food poisoning. Once the cans are cooled in the last compartment of the retort, they are stamped on their sides and/or bottoms with codes specifying the date and time of production. Finally, they are scanned for distortion (which would cause automatic rejection), labeled, and packed in cases for shipment.

Canned advantages
The high moisture content of canned food may be helpful for dogs with cystitis or kidney disease. If you are tempted to mimic this by simply adding water to the dry food – don’t! Dry foods commonly have bacteria on the surface that would love a warm, wet environment to grow in. Moistened dry food that sits out for a couple of hours can make a dog very sick.

If your dog is chubby, you might want to add some canned food to her ration. Canned food may fill her up and leave her more satisfied, yet she would be consuming far fewer calories than if she were eating only dry food. (Choose a low-fat canned food, however, because many canned foods are also considerably higher in fat than dry food.)

Canned food is usually more palatable than dry, and may be more successful in tempting a sick or fussy dog to eat.

How dry food is made
Most dry dog foods start with ground yellow corn or similar cereal grain, and a meat or rendered product such as poultry by-product meal, which are blended to make a dough. Various additives such as gums, emulsifiers, stabilizers, colorings, and flavors may be added at this point. The dough is then put through an “extruder,” a long tubular machine with an internal screw that moves the dough along its length.

There are many kinds of extruders, which can be used for everything from plastics to sausage. Commonly, dog food is made in a single or twin-screw extruder. Depending on the content and desired texture, parts of the extruder may cook the product as it moves along. Generally, steam heat and pressure are used to push the dough. Newer extruders use very high heat for very short periods of time to cook the product.

At the end of the extruder, the dough is squeezed out through the small openings of the die, much like a cake decorating tip. Immediately outside the opening, a rapidly whirling set of blades slices off tiny pieces of the dough, which “puffs” as it exits the pressurized extruder. The shape of the die determines the shape of the kibble. Extruders are limited in their ability to handle wet or greasy materials. The need for a firm, doughy consistency is one reason dry foods contain a large proportion of starch or cereal grains, such as potato, wheat or corn.

After the product comes out of the extruder, it must be dried. There are vertical, horizontal, belt, and carousel type dryers. Each has its advantages; vertical dryers take up less floor space, while some carousel dryers provide more even heating. The moisture content is carefully controlled because it affects the stability and palatability of the product. After being cooled in the latter stages of the dryer, most extruded products are sprayed or dusted with fats, digests, or other flavorings (see WDJ’s article about palatants, “He Likes It! Hey Mikey!,” November 2000).

Finally, the food is bagged, sealed, and put on pallets for shipping. Most manufacturers still use paper bags with a relatively impervious liner to keep air and dampness out, and oils and flavors in. A few products are now bagged in Mylar, which has long been popular for treats.

I like mine dry
Dry food is more convenient and less messy than canned food. It is much more economical, and may be the only realistic option when feeding big dogs, lots of dogs, or lots of big dogs! It is easier to transport for dogs who travel. It can be left out, or stored in automatic feeders, without getting dry and crusty, and does not require refrigeration for leftovers. The higher fiber content of dry foods may be advantageous for diabetic dogs because it moderates food absorption, thus keeping blood sugar more stable.