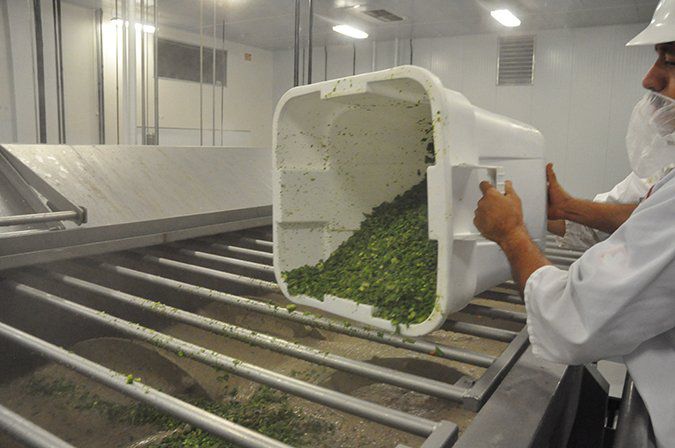 I’ve always wondered how wet dog food gets made – but it took a long time to find out. It seems like it’s more difficult for a journalist to get into a pet food cannery than into a factory that builds spy planes.

I’ve been in three. The first was Evanger’s Dog & Cat Food Company, located in Wheeling, Illinois, about six or seven years ago. A couple years later I was invited to tour American Nutrition, Inc. (ANI), in Ogden, Utah. Most recently I toured a brand new facility that was built, and is owned and operated by Lotus Pet Foods, in Torrance, California.

Evanger’s has operated on the same site since the company was founded in 1935. Fred Evanger, a breeder of Great Danes, originally operated the facility as a horse slaughter plant/pet food supplier. The plant has been renovated and additions built to accommodate modern machinery – and of course, no animals have been slaughtered on site for decades. It’s a small operation, owned and operated by a family. The plant was not being operated when I was given a tour, so I didn’t get to see canning in action, though I was able to view the ingredients used by Evanger’s and their storage and manufacturing facilities.

ANI has pet food production facilities in five states. I toured its Utah plant; the facility produces several types of pet foods: wet food, extruded dry food, andbaked treats and food for dogs.  The plant dates to the early 1970s and is quite large. The size and sprawl of the plant made it difficult for a complete newbie like myself to follow and fully comprehend the flow of ingredients through the plant. At the time of the tour, I was primarily interested in the various safety checks that had to do with mixing various formulas for a variety of customers. The manager of the plant showed me all the various steps that the employees took to make sure that only the specified ingredients made it into each batch of food and in the specified amounts.

I got the clearest picture of how a batch of food is made from my most recent tour, of the very new Lotus Pet Food facility in southern California. The plant was put into operation in February 2011, so it’s still spotlessly clean – and without any “off” odors. It was built with plenty of room for expansion, so even very large pieces of equipment looked relatively small in various rooms in the gigantic warehouse-style building.

As a result of travel delays, I didn’t get to see the day’s very first steps in the making of a batch of Lotus’ Beef & Asparagus Stew. The production crew was waiting for us to arrive so they could complete the mixing of the food and start canning the batch. We did some backtracking through the plant, however, so I could recreate the process.

Lotus uses all USDA-inspected and -passed meats – what people commonly refer to as “human-grade,” although that term is not legal. (Any meat that is brought to a pet food plant is automatically considered NOT human-grade, even if it washuman grade, the moment before the truck was opened at the plant.) Lotus’s  meat is in packages – shrink-wrapped in plastic in the case of the beef shoulders, and packed in heavy-duty plastic bags in the case of turkey or chicken – and boxed in cardboard. The boxes are stacked and placed on pallets in the refrigerated room.

Early in the morning, the crew will begin taking the still partially frozen meat out of its packages and feed it into a machine that subjects it to both grinding and steam. When this process is complete, the meat appears shredded and roasted. It’s packed loosely in tubs and taken to the “kettle” to await its next step.

The water that is used in this process – meat broth, at this point – is collected and transferred to the kettle where the final “stew” is mixed. This is a giant vat, with a capacity of 6,500 pounds of food. The kettle is heated, bringing the broth to 180 degrees as blades spin slowly through the mixture, stirring and combining the ingredients into a “gravy.”  A number of ingredients are mixed into the broth; in the case of the Lotus Beef & Asparagus Stew that I saw made, these ingredients were egg whites, potato flour, the vitamin/mineral premix, flaxseed, kelp, and some healthy fat sources: wild salmon oil, olive oil, and chicken fat.

Unlike many pet food makers, Lotus does not use any “gum” ingredients to thicken its wet foods: no guar, carrageenan, or xanthan gum. (Each of these gums are somewhat controversial; they are “generally recognized as safe” [GRAS] by the FDA, but some people have different concerns about each type of gum.) Lotus’ dog foods are all “stew” types, which have a higher moisture content (about  80 percent) than the “loaf” style foods, which are about 78 percent moisture; the stews don’t need to be as thick, so gum is an easy thing to omit in these formulas.

After the gravy is well mixed, the final ingredients — meat, fruits, and vegetables — are added to the kettle. The meats are shredded; the carrots and asparagus are chopped into small chunks; the blueberries are whole. In the Lotus formulas, there are no “restructured” meats ( a mixture of ground meats and powdered proteins that are mixed,  pressed into shapes, and held together with gluten binders and/or pork plasma) or powdered fruits or vegetables, although these ingredients would be added at this stage in a food that contained them. Lotus is somewhat wary of powdered ingredients, due to the ease with which they can be adulterated.

Again, the food is brought up to 180 degrees F.  and well-mixed. A sample is taken to the laboratory so that the elements in the “guaranteed analysis” can be checked: protein, fat, fiber, and moisture content. The level of “ash” in the food (in a wet food, this is comprised largely of the mineral content) is also checked. Before a sample of the food can be poured onto the plate for the near-infrared analyzing unit, the sample is ground in a food processor, so the nutrients in the chunks of ingredients can be integrated in the food’s average values. With a good formula and ingredients that have all met the company’s quality inspections, there shouldn’t be any surprises.

With various pumps, the food is now moved through pipes out of the kettle, through a metal detector (which would dump that portion of the food out of the system if it detects even a tiny fragment of metal in the food, both ferrous and non-ferrous), and into the can-filling machine, where it will be dispensed into cans (or in other companies, into pouches). The cans have been transported into the can filling room through a small opening in one wall near the ceiling, arriving on a conveyer of their own that whisks them through a quick wash in boiling water, turns them upside down (to let the wash water run out), and then into the queue for filling.  An operator watches the control panel to make sure the computer detects no errors in the can-filling process.

The cans pass out of the filling machine and proceed directly to a can seamer, where the lids are positioned onto the cans and sealed.  Immediately following is a machine that checks the amount of food in the can; if the can has not been filled properly (too much or too little), the can is whisked by the machine off of the line and into a tub for disposal.

A quality control technician also inspects a number of cans at this point, randomly selecting a number from all points in the run. He checks the temperature of the mixture inside the cans, to make sure the food is still above 100 degrees; it needs to maintain this temperature until it’s placed into the retort (cooking and sterilizing) machine.

He inserts a device into some cans (which are then thrown away) that checks the vacuum pressure inside the can, to make sure there are no defects in the seal. (Before any of the cans are filled with food, some empty cans are run through the seamer, and the technician “tears down” these cans, visually inspecting the seal to make sure the seamer is working perfectly.  The vacuum seal must be perfect to preserve the food and maintain its safety.

The bottom of the cans are stamped with a batch code and “best by” date as they  pass through another small opening into the retort room. Here, the cans are gathered by a machine and organized onto baskets with dividers. The baskets are stacked with layers of cans (each layer is separated by a divider) until the basket  is filled. Then the baskets are moved into the retort machines.

A retort is a large chamber into which steam is pumped under high pressure. Computers monitor the “cook” – the combination of time, temperature, and pressure needed to sterilize the food in the cans. The process also cooks the vegetables and fruits, increasing their digestibility. In “loaf” type foods, the retort can activate certain ingredients (like carrageenan or xanthan gum) to gelatinize into a meatloaf form.

As workers carry out these tasks, others are busy scrubbing down all the machines that were used in the process of mixing the food. The steam cookers that were used to prepare the meat are scrubbed and sterilized with steam, as are the mixing kettle and can-filling machines. Steam is also used to flush out all the pipes that transported the mixture from machine to machine.