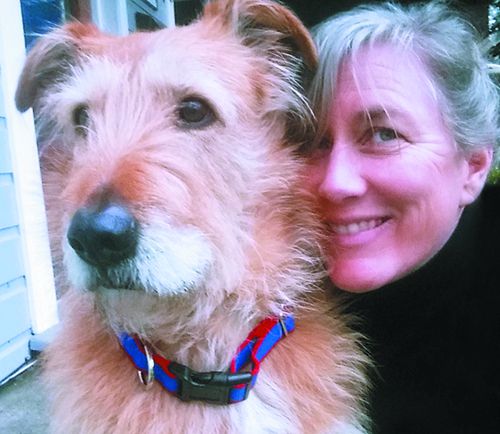 About five years ago, we ran an article about “counter surfing” – the euphemism for the act of dogs taking any food they can find on your kitchen counters – and I couldn’t find a picture of a dog “caught in the act.” That might be because, usually, if we spot a dog eating our dinner or licking the butter dish on the counter, we don’t take a photo of it. Instead, we interrupt the behavior and redirect the dog to another activity. Wait – that’s the right thing to do. Most of us probably just yell, “WHAT DO YOU THINK YOU’RE DOING?!” But I digress.

At the time I needed the photo, my son’s dog, Cole, was staying with me; my son was somewhere else on the planet, at one of his athletic competitions somewhere. Cole is always happy to play the training game with me, so I taught him to stand on his hind legs with his front paws on a butcher block table, near a nice roast beef sandwich. Then I took pictures of him doing it.

The photos looked a lot like a dog who was counter-surfing – only Cole looked cheerful and expectant, instead of a dog who had gotten yelled at for “stealing food.” This is because he hadn’t been yelled at; he was receiving treats and praise after every few pictures I took!

When my son got back from wherever he had gone and asked for a report on the activities Cole enjoyed in his absence, I told him about how helpful Cole had been, modeling for WDJ again. My son was rather unamused. “Mom!” he scolded. “If he starts taking food off counters and tables, I’m going to be so mad! And why didn’t you use your own dog, anyway?”

I didn’t use my own dog for these photos, because Otto wouldn’t dream of putting his paws on the counter; it would have taken me weeks of training to get him to look even slightly convincing as a counter-surfer. (Also, Woody wasn’t born yet.) Until recently, Otto has never once taken food from the counter, kitchen table, or even a carelessly uncovered kitchen garbage can. It never occurred to him – until recently, when he started displaying a little senior dementia, or old dog privilege, or whatever you call it when a dog helps himself to the burrito on the coffee table right in front of you. Um, Otto?

Anyway, I was thinking about all this because our Training Editor, Pat Miller, has written a great article about counter-surfing in this issue (see page 6), and I came across those pictures of sweet Cole. I called my son to ask, “Remember when I used Cole as a model for a dog who is counter-surfing? And you were so mad? Did he ever counter-surf after that?”

Fortunately, the answer was no. Whew!